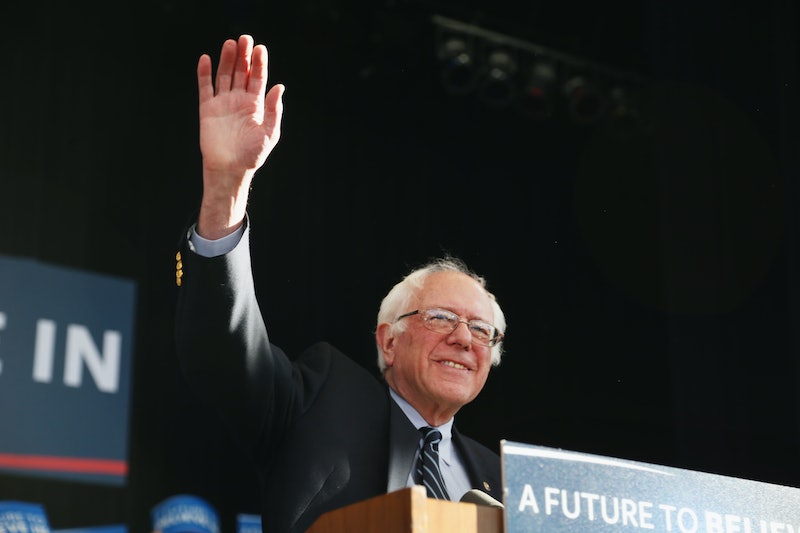 There are 35 pledged delegates at stake in the Nevada Democratic caucus. Results are still filtering in from the sparsely-populated northern counties of the Silver State, however it appears as if, just like in Iowa, former Secretary of State Hillary Clinton has eked out a narrow victory over Senator Bernie Sanders' campaign. So, just how many delegates did Bernie Sanders pick up from the Nevada caucus?

Nevada Democrats award delegates proportionally, and with 86 percent of the statewide vote already counted, it appears as if Sanders will walk away with 15 delegates, just four fewer than Clinton's projected 19. Now, this math isn't taking into account Nevada's superdelegates — and there are eight of those at stake in addition to the 35 pledged delegates that the two Democratic presidential candidates were fighting over Saturday. So far, Sanders has the support of only one Nevada superdelegate out of the eight: Erin Bilbray. Bilbray is a member of the Democratic National Committee and the founder of the non-profit Emerge Nevada, which trains women to take on leadership roles in politics and in the business world. While she initially said that she was leaning towards supporting Clinton's campaign, she changed her mind, throwing her support behind Sanders' run for the White House. In a press release from Sanders' campaign, Bilbray said:

As a mother of two young daughters, their future is my priority, which is why I am endorsing Bernie Sanders as the Democratic nominee for president of the United States.

Southeastern Lincoln County at one point looked like it may have been a possible pickup for the Sanders campaign; at 4:30 p.m. PT, only 60 percent of the precincts had returned their results with the candidates are tied neck and neck at 50 percent. However, Clinton went on to win exceedingly rural Lincoln County, which boasts a total population of just over 5,000 people and a population density of less than half a person per square mile, by a margin of 20 percentage points, besting Sanders with 60 percent of the vote share to his 40 percent. The county is probably best known nationally as the location of Homey Airport/Groom Lake, also known as Area 51.

Tiny Storey County, just north of state capitol Carson City, is currently tied with only 63 percent of all precincts reporting in as of 6:10 p.m. PT. Storey County is the third-most sparsely populated county in the state — although it is considered to be part of the Reno metro area — with just under 4,000 residents calling Storey County home.

Results from the northern counties still have not been completely finalized, but Sanders dominated in north-central Eureka country, willing 86 percent of the vote to Clinton's 14 percent. Neighboring Lander County split 70-29 in favor of Sanders with 11 percent of the vote still missing. With the rest of the results still trickling in, it is possible that at the end of the day, Sanders may be able to pick up another delegate or two from Nevada for the national convention in Philadelphia after each and every vote has been counted.