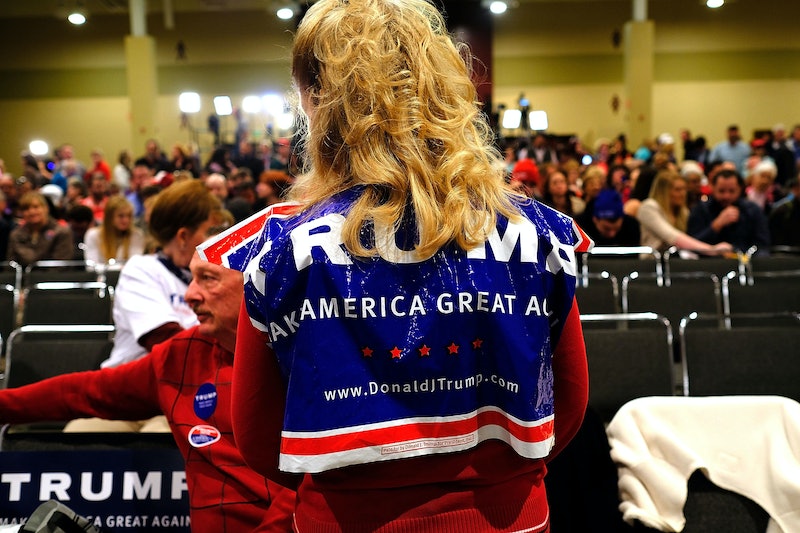 Saturday was a whirlwind of a day for Republicans and Democrats. The Democratic Nevada Caucus saw Hillary Clinton narrowly beat Bernie Sanders just as polls were closing in South Carolina for the "first in the South" Republican primary. With six Republican candidates still remaining, what unfolded in the Palmetto State was very different from the intense battle between Clinton and Sanders. GOP frontrunner Donald Trump handily won the South Carolina primary, claiming a projected victory less than an hour after ballots had been cast. While the remaining candidates eat his dust and contemplate next steps, Donald Trump winning South Carolina memes have been similarly popping up in record time.

Many of those who've posted memes about the Donald aren't exactly thrilled about the candidate's victory. Trump certainly has done a considerable amount to alienate many Americans, including Republicans because of continuing his feud with fellow candidates Jeb Bush and Ted Cruz. His verbally sparring with Pope Francis this past week also earned Trump fresh criticism. The memes popping up in the wake of Trump's victory certainly reflect the frenetic side of the candidate, as well as convey the confusion of those who are simply puzzled as to why so many in South Carolina appear to support him.

The Donald's momentum cannot be denied as he continues to outlast presidential hopefuls, including Bush, who has reportedly dropped out following the South Carolina primary. His numbers point to an almost inevitable Republican nomination. Trump has proven time and again to be impressive comedic fodder for voters around the country. Every debate performance appears to be grounds for dusting off your favorite memes and adding the Trump insignia to them, from the Donald's iconic hair to his outlandish statements.

The frontrunner's victory speech proved similarly fruitful, though it did include some sweet moments such as when Trump congratulated his fellow candidates on their performance and gave his wife and daughter the opportunity to say a few words to his supporters. Between more tender moments, the Donald was his standard, bombastic self, however. The candidate's demeanor has as much power to rile up voters as it does to inspire some of the more ridiculous memes on the internet. Imagine an entire four year presidency with Trump at the helm. If the South Carolina primary is any indication, the country is in for some seriously hilarious times, to say nothing of the political implications of having such a commander in chief.