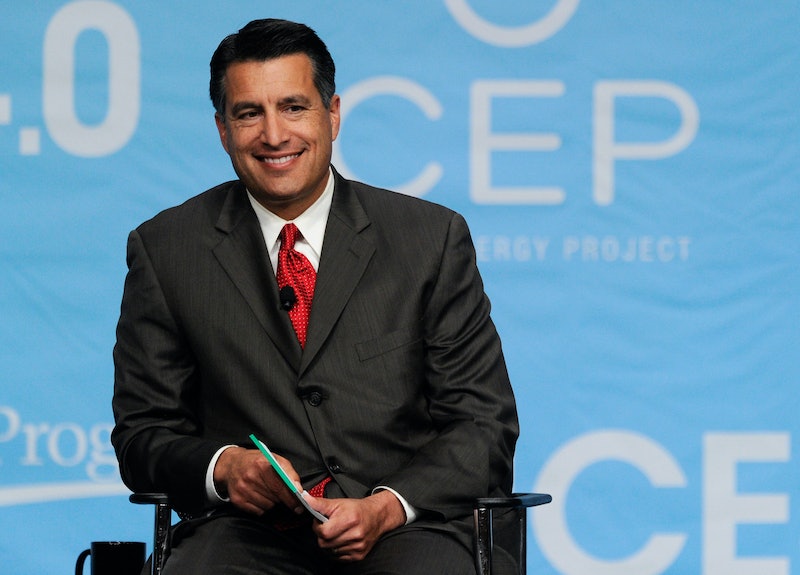 Just on Wednesday, reports were swirling that President Obama was vetting the governor of Nevada for a possible SCOTUS nomination. But the very next day, Republican Gov. Brian Sandoval withdrew his name from Supreme Court consideration, without giving a reason for doing so. He was in a tough spot, as Senate Republicans had said they wouldn't consider any Republican nominee, and several people have speculated that he might not have wanted to be part of this contentious situation. His office released a statement which read:

Earlier today, I notified the White House that I do not wish to be considered at this time for possible nomination to the Supreme Court of the United States. I have also spoken to Senators Reid, Heller and McConnell and expressed the same desire to them. The notion of being considered for a seat on the highest court in the land is beyond humbling and I am incredibly grateful to have been mentioned.

Sandoval would have been a surprising pick for Obama to make. Although the centrist governor has a strong record of bipartisanship, he is still, well, a Republican. But he's not your (what's now) typical conservative. He might be staunchly pro-gun and against the Affordable Care Act, but he considers himself pro-choice and has made several pro-immigration policies while in office, despite saying that he opposes amnesty.

Obama recently wrote a guest post for SCOTUSblog in which he listed the criteria he's seeking for the next Supreme Court justice. He said he would look at "members of both political parties, and people across the political spectrum," which he proved by vetting Sandoval. He also clearly referenced the current political climate when he said, "I seek judges who approach decisions without any particular ideology or agenda, but rather a commitment to impartial justice, a respect for precedent, and a determination to faithfully apply the law to the facts at hand."

So perhaps Sandoval, who is a former attorney general, as well as a former judge for the United States District Court in Nevada, could have been the one to get Senate Republicans' to break their promise that they wouldn't consider any Obama nominee at all. But it appears he doesn't want to play that role. It's hard to blame him. It doesn't matter that he leans right; the hoops that the current Senate Judiciary Committee would have likely put forth for him to jump through would be enough to deter anyone from wanting the position.