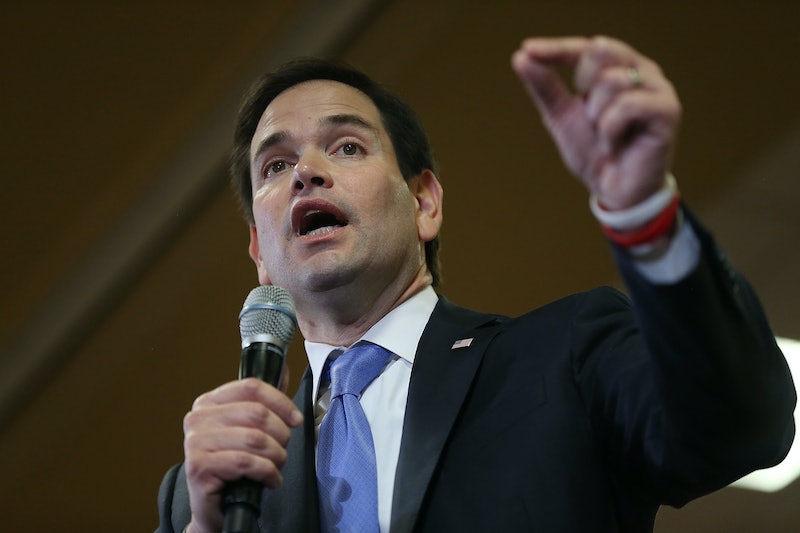 On Thursday night, the Republicans set a bit of a milestone: the tenth debate of the 2016 election cycle, leaving a mere two to go, with everything on the line. While there's still five candidates in the field, with Ben Carson, John Kasich, Ted Cruz, Marco Rubio, and Donald Trump, only the last three have any clear or credible case that they'll win the nomination. And Rubio needed a big night, too ― why not read Marco Rubio's closing statement from the tenth GOP debate, and decide for yourself whether he finished strong?

There's no doubt that Cruz and Rubio are locked in a pretty grim standoff right now, and how things shake out after Thursday night's debate (specifically on Super Tuesday, which will see 12 states cast their votes) could very well make the states still-to-come moot points. Basically, a competitive Super Tuesday (with real victories, not moral ones) for either or neither of them will determine once-and-for-all whether they have any hope of stopping Trump, the clear frontrunner.

And as far as pitching themselves to the public on a big, national forum is concerned, there are only a couple more of these debates left. Here's how Rubio decided to use the last of his time on Thursday night.

Well, thank you for having us tonight. You know, this campaign has come a long way. It was just a few months ago there were 15 or 11 of us on the stage, and now it's narrow and the votes are starting to count. And we have an incredible decision to make. Not just about the direction of America but the identity of our party and the conservative movement. The time for games is over. I know you've had a lot of choices to make, but now it's time to narrow it down, and I'm asking you to get behind me. Go on my website and join my effort, MarcoRubio.com, so we can bring an end to this silliness, this looniness, and once again re-embrace all the things that made America and the Republican Party the bearer of the conservative movement in this country.

Rubio is facing some long odds on Tuesday, as least as far as the polls going in are indicating ― on top of Trump's substantial leads in seven of the 12 states going in, he's also currently dusting Rubio in his home state of Florida by nearly 20 points. Florida Republicans won't head to the polls until March 15, but needless to say, losing by that kind of margin would naturally spell doom. That's perhaps why his campaign is trying to stir up positive expectations for Rubio's chances in the Sunshine State ― Rubio adviser Todd Harris tweeted before the debate on Thursday that "We are going to win Florida. Period. Take it to the bank."