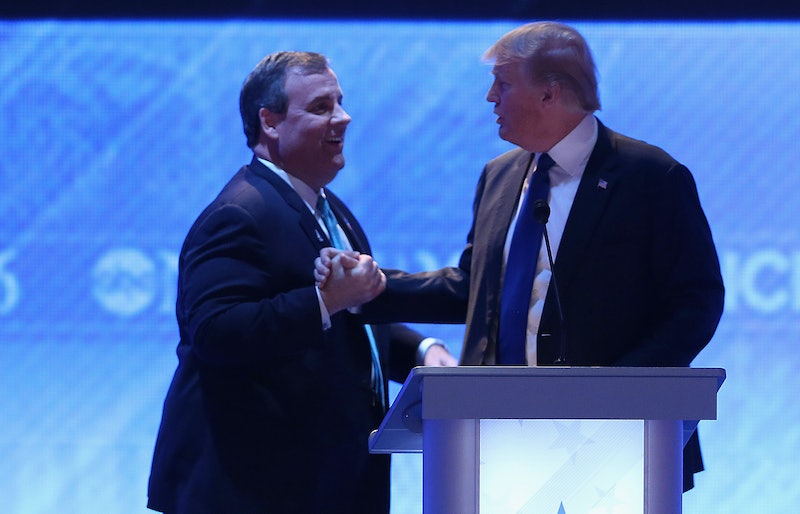 Chris Christie suspended his presidential campaign on Feb. 10, right after he lost the New Hampshire primary. Now, after several weeks, Christie endorsed Trump during an impromptu press conference on Feb. 26. Although Christie never earned any delegates throughout his campaign, his recent endorsement makes many question if Trump will gain delegates from Christie's endorsement.

If you're still confused by what delegates are and how they work, you're not alone and before you can think through what Christie's endorsement means for Trump's future delegates, here's a crash course in delegate allocation.

Delegates are essentially state representatives that will participate in the nomination process for the Democratic and the Republican parties before the general election. Presidential candidates earn delegates after every primary and caucus — think Iowa, New Hampshire, South Carolina, etc. — but the delegate allocation is a bit complex. For Democrats, delegates are awarded proportionally based on percentage points, so if a candidate wins 40 percent of the votes then they receive 40 percent of the state's delegates. However, Republicans only proportionally allot delegates in 31 states, but those states have the option to give all their delegates to the candidate who receives 50 percent or more of the votes. In the remaining 19 states, the Republicans implement a winner-take-all strategy in which the candidate with the highest percentage of votes receives all of the state's delegates.

So, what does all this mean for Trump in light of Christie's wild-card endorsement? It's difficult to say for sure, especially since Christie never earned any delegates himself. With 81 delegates, Trump is leading the Republican candidates by 64 delegates (Ted Cruz has 17 and Marco Rubio has 16) and will likely continue to lead in the upcoming Super Tuesday on Mar. 1.

After he suspended his campaign in early February, Christie sold his list of email supporters and donors to Rubio's campaign. That means Christie's previous supporters were being targeted, via email, by Rubio's campaign in hopes that they could pick up their support moving forward. Although this was not an endorsement by Christie, his supporters were directly confronted with Rubio propaganda because their favorite (former) candidate sold their information to him. It's unclear how Christie supporters have been voting since his campaign suspension, but I would argue that an endorsement by the man himself speaks louder than selling your list of email supporters to a rival candidate.

Of the 11 states participating in Super Tuesday, Trump could feasibly lose Texas, as that is Sen. Cruz's home state and polls are showing he has a clear lead there. With 155 delegates available to the winner of the TX primary, Cruz could close the delegate gap between him and Trump if he manages to win the southern state. However, Trump could still win even if he places second in TX given the state's delegate allocation; if a candidate wins the majority of the votes, then Texas becomes winner-take-all, but typically it employs a proportional system, which means Cruz would still have to give up a portion of the 155 delegates to Trump.

Every Super Tuesday state (except Virginia) implements a threshold system before candidates can receive delegates. That means in 10 of the states participating in the SEC Primary, candidates have to garner at least 10 percent of votes before they can be awarded delegates. This threshold wouldn't be an issue for Trump, who has never received lower than 24 percent of the votes in any of the primaries or caucuses. In Nevada, Trump gained almost 50 percent of the votes, which allotted him twice as many delegates as Rubio who finished second.

In the past three election-voting events, Trump has emerged with more than three times the 10 percent threshold set by the majority of states on Super Tuesday, which bodes well for the GOP frontrunner whose goal is to continue earning more delegates along the way. After Christie's recent endorsement, as well as Trump's undeniable momentum, it wouldn't be surprising if Trump gained delegates from this surprising turn of events. This endorsement could help Trump pick up votes from some of Christie's previous supporters — which means more percentage points for Trump — and, ultimately, would result in meeting or surpassing a threshold (or earning 50 percent for a winner-take-all system) and thus award more delegates to The Donald.