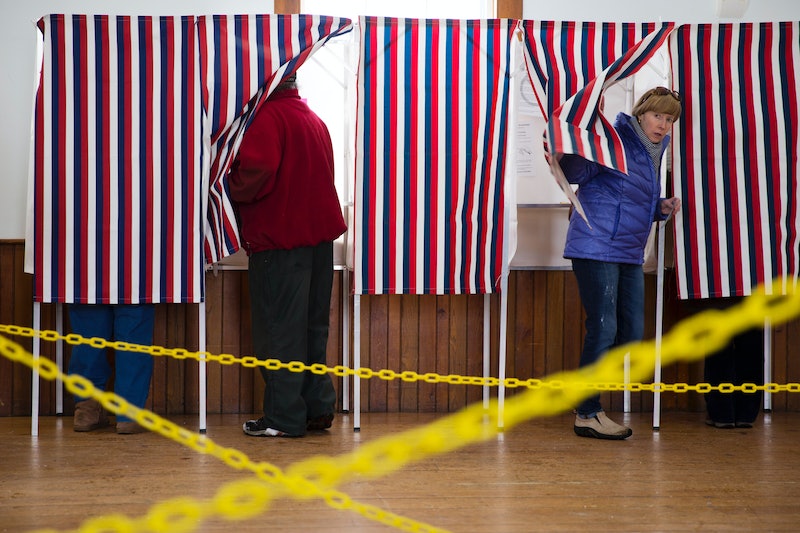 The exciting one-day election extravaganza known as Super Tuesday will be held on March 1 across the U.S. From Minnesota to Texas, there are 12 states participating in the highly-anticipated event, which consists of a combination of primaries and caucuses for both parties. As Donald Trump has secured his place as the the GOP frontrunner, winning three of the four state elections thus far, it would not be surprising if he carries this momentum through Super Tuesday. On the Democratic side, Hillary Clinton and Bernie Sanders remained nearly tied until Clinton swept the Nevada caucus with nearly 53 percent of the vote. As political junkies gear up for the "biggest test of 2016" by predicting the outcomes, it becomes clear that Clinton and Trump are projected to win Super Tuesday.

If you've been following along this election season, you probably know by now that politics can be unpredictable. It could be anyone's game come Super Tuesday — especially if Ted Cruz manages to win Texas, which has 155 delegates at stake and would thus close the gap between himself and Trump. However, polling site Real Clear Politics has detailed the likelihood of each candidate winning the different Super Tuesday states, as well as how many delegates they could receive, and the predictions overwhelmingly favor Clinton and Trump.

Here's a state-by-state breakdown of who's projected to win Super Tuesday.

Because Texas is Cruz's home state, RCP Republican polls project him to finish first there on Super Tuesday. Trump has spent a ridiculous amount of money on ads, including nearly $400,000 on ads in Texas alone, but the polls still rule in favor of Cruz. With a projected 34 percent of the votes, Cruz is predicted to lead Trump by 7.2 percent and Rubio by 15.8 percent.

On the Democratic side, Clinton is projected to win Texas, no problem. RCP predicts that she will garner nearly 60 percent of the votes, while Sanders could end up with only 33.6 percent. Texas awards delegates proportionally, so with 252 to be awarded, that means Clinton could take as many as 151 of them come March 2.

There are 76 delegates available in Georgia, and according to RCP GOP polls, Trump is projected to be the clear winner of the Peach State. With a 15.7 percent lead over the predicted second-place candidate (Rubio), Trump is expected to emerge with 37 percent of the votes. Georgia has a "winner-takes-most" system for delegate allocation, and Trump could walk away with 40 or 50 delegates.

For Democrats, there are 116 delegates available in Georgia, and the RCP Democratic polls show Clinton could beat Sanders by as much as 38 percent. If Clinton manages to win with her projected 63.8 percent support to Sanders' 25.5 percent, she could leave with more than 55 delegates.

Trump could have the largest advantage over the other candidates in Massachusetts, as RCP GOP polls project a 27.5 percent lead. If Trump can actually achieve the 45 percent support that RCP predicts, Cruz, Rubio, and John Kasich would finish with embarrassingly low numbers — in the teens and tens. Kasich, though, is projected to finish third, ahead of Cruz, which would be a small victory for the Ohio governor.

Sanders has been counting on winning MA during Super Tuesday, but his projected 0.6 percent lead over Clinton is too narrow for him to be confident just yet. As with other single-state elections this year, Clinton and Sanders are projected to emerge nearly tied, with 45.7 and 46.3 percent, respectively.

According to the RCP polls, Trump is projected to finish with his lowest percentage in any of the Super Tuesday state in Minnesota. With only 20.7 percent support, Trump could achieve a narrow win against rival Rubio, who is projected to finish with 14.7 percent. What's most surprising about the North Star State, though, is Ben Carson's predicted third-place finish, which places him only one percent behind Rubio.

Clinton could see an easy win against rival Sen. Sanders in Minnesota, as the polls project her to win by 26 percentage points. Finishing with 54.5 percent of the votes would be a huge win for Clinton, who could then leave with a majority of the 93 available delegates.

With Bill Clinton speaking on behalf of Hillary throughout Oklahoma, her victory over Sanders could be inevitable. Right now, RCP polls have her projected to beat Sanders 45 percent to 36 percent.

Trump is projected to achieve a 21 percent lead over Rubio in Alabama, which would secure a win and help secure a significant amount of the state's 50 delegates. The RCP GOP polls are a little surprising for the Yellowhammer State, since it predicts that Rubio and Carson will finish with a tie at 11.5 percent and Cruz close behind with 11 percent.

According to Public Policy Polling, Clinton could lead Sanders by 28 percentage points. If Clinton walks away with 59 percent as projected, she would also earn more than 30 of the available 60 delegates, thus leading Sanders in both votes and delegate allocation.

If the polls are correct, Arkansas could be a big win for Cruz, as he is currently projected to beat Trump by four percentage points. However, since the top three candidates are projected to finish with similar numbers (Cruz with 27 percent, Trump and Rubio tied with 23 percent), the delegate allocation would be almost identical.

Once again, Clinton is projected to beat Sanders by nearly 30 percentage points. There are only 37 delegates available in Arkansas, but if Clinton leaves with her predicted 57 percent of the votes, then she will also garner more than half of those delegates.

According to International Business Times, Trump is projected to take a narrow four-percent lead over Carson in Tennessee. A second-place finish for Carson would not only be nice for his self-esteem, but also for his delegate allocation. If Carson manages to leave with his projected 25 percent of the votes, then he could also win 25 percent of the 58 delegates available. With Trump's predicted 29-percent win, though, he would still leave with more delegates than Carson, adding to his already-large number of delegates.

Clinton could sweep Tennessee with 53 percent of the vote, according to RCP polls, leaving Sanders behind at just 30 percent. There are 76 delegates available for Democrats in Tennessee, which means Clinton would be taking home more than half of those.

In a surprising turn of events, Carson is projected to win Colorado, according to IB Times. If he leaves CO with 25 percent of the votes as predicted, he would beat Rubio by six points, and, shockingly, he would beat Trump by eight points. CO would be a huge win for Carson and an opportunity for him to gain a portion of the 37 available delegates.

According to the same polls, Clinton could win CO with more than twice the percentage points as Sanders. Similarly to other states, Clinton is predicted to win CO with over 50 percent of the vote to Sanders' 27 percent. That means Clinton could once again gain more than half of the 79 available delegates, thus putting her further ahead of Sanders.

The RCP polls have Trump projected to beat Rubio by 15 percentage points and Cruz by 19 percentage points. More than one-third of the 49 available delegates would go to Trump if he manages to win with his predicted 35.7 percent of the votes.

In an almost 20-percent lead, Clinton could beat Sanders 54.5 to his 34 percent, according to RCP polls. There are 110 delegates available for Democrats in Virginia, which would give Clinton an advantage over Sanders, because she would gain more than 55 of these delegates.

The IB Times polls project that Trump and Cruz will be nearly tied in Alaska this Super Tuesday. With only a predicted four-point lead, Trump could barely win with 28 percent to Cruz's 24 percent. There are only 28 delegates available, but since Alaska employs a proportional system, Trump and Cruz would win a comparable amount of those delegates.

Trump is projected to take Vermont with 32 percent support over Rubio, who is predicted to finish second with 17 percent of the votes, according to IB Times. That's a large margin for Trump to feel fairly confident going into Vermont this Super Tuesday. A strong finish would also mean a larger portion of the 26 delegates for Trump, who already leads the GOP candidates in delegates.

Since Sanders is from Vermont, it is no surprise that he is projected to sweep the state on Mar. 1. The IB Times polls predict he will win this state with 84.5 percent of the vote to Clinton's 9.5 percent. This is a huge project for Sanders, but it would be shocking if he didn't perform that well in his home state. With 26 delegates available and almost 90 percent support, Sanders would also take nearly all of these delegates against Clinton.