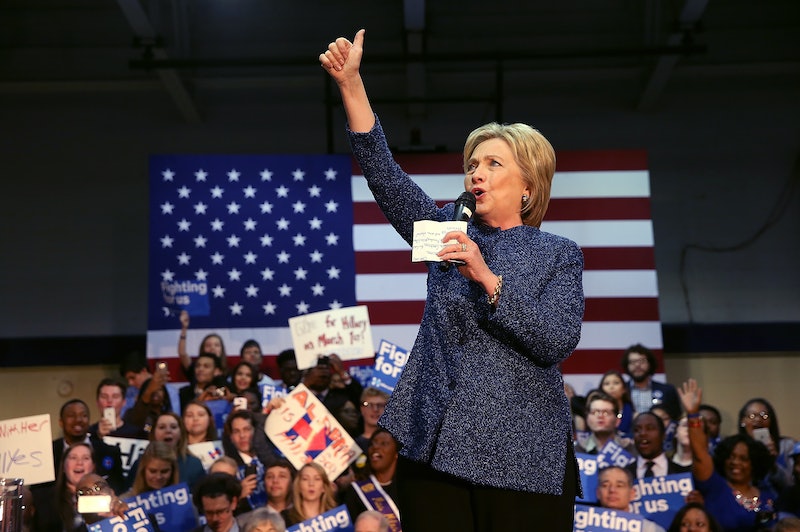 On Saturday night, former Secretary of State and Democratic frontrunner Hillary Clinton had a big night, fulfilling years of coalition-building in the state of South Carolina. She won the state's crucial primary by a staggering margin, a race that was called in her favor just minutes after the polls closed. It wasn't a shock or a surprise by any means, considering she'd been leading by an average of 27 points in the polls heading in, but he campaign was in a plainly celebratory mood ― Hillary Clinton's South Carolina victory speech was exactly the kind every politician dreams of giving someday.

That's not even necessarily because of any one thing she said, to be clear. It's the situation that's so rare, and probably such an intoxicating feeling ― when you have huge expectations, and you meet or even exceed them in grand fashion. When you get to take the stage with no distracting thoughts about optics, like having to confidently manage disappointment, or artificially amp up enthusiasm after a distant finish (Marco Rubio knows all about that last one).

And whatever you might think about Clinton ― it's been a rough primary season, after all ― it's tough to deny her skill as a forceful and fiery orator, and never more so than when the wind's at her back. Here's how she decided to mark the occasion, and generate some momentum heading into the ever-monumental Super Tuesday.

Thank you! Thank you so much South Carolina! Thank you, thank you! Thank you so much, from one end of this state to another, I am so greatly appreciative, because today you sent a message. In America when we stand together, there is no barrier too big to break. We've now gone through four early states, and I want to congratulate Senator Sanders on running a great race, and tomorrow, this campaign goes national! We are going to compete for every vote, every state. We're not taking anything, and we're not taking anyone for granted.

I want to thank all the local leaders, legislators, mayors, pastors, organizers, volunteers, who have worked their heart out for this campaign. I thank all of our great South Carolina friends, going back so many years. I especially want to thank two of your former great Democratic governors, Dick Reilly and Jim Hodges, and I especially want to thank your champion, your statesman in Congress, Jim Clyburn. I am so looking forward to working with the congressman, to make the changes and continue the progress that we can build on the record and accomplishments of President Obama.

Clinton shouted-out the "more than 850,000 people" who've donated money to her campaign, and touted her number of small-dollar donations ― her Wall Street and financial firm donors are a frequent point of attack for Sanders ― and asked for supporters to donate to her campaign at HillaryClinton.com, saying that she wanted to create an America in which "everyone can live up to their god-given potential."

She went on to pledge to improve childhood education, enable entrepreneurship, and alleviate student debt. But none of that had half the emotional resonance and impact as when her speech turned to race. In addition to pledging additional support to historically black colleges, Clinton achieved perhaps the most pitch-perfect emotional tenor of her entire campaign in discussing racial injustice, citing several high-profile examples of slain black Americans.

...We also have to face the reality of systemic racism. That more than a half a century after Rosa Parks sat, and Dr. King marched, and John Lewis bled, still plays a significant role in determining who gets ahead in America, and who gets left behind. ... And tonight, I want to pay tribute to five extraordinary women, who criss-crossed this state with me and for me. Five mothers brought together by tragedy.

They all lost children, which is almost unimaginable. But they have not been broken and embittered, instead they have channeled their sorrow into a strategy, and their mourning into a movement. And they are reminding us of something deep and powerful in the American spirit. By now, we all know the story of Flint, Michigan. How a city's children were poisoned by toxic water, because their governor wanted to save a little money. But there's another side to the story in Flint, it's the story of a community that's been knocked down but refused to be knocked out.

It's one thing to read this portion of her speech off a page, and quite another thing to actually hear it. If you've got the time, do yourself a favor and give it a watch. There's no doubt it was apropos to honor those five slain people the way that she did, and with such somberness ― her outreach to black voters has been aggressive and constant, and it helped lead her to a staggering victory margin of about 50 points in South Carolina.