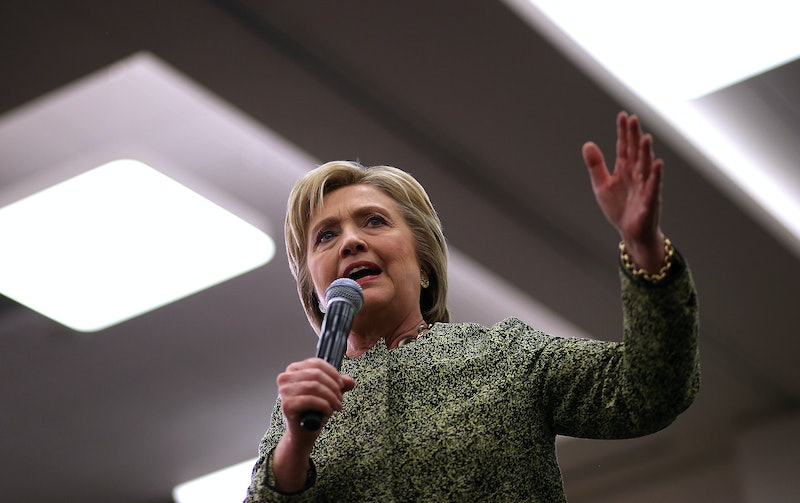 Democrats in eleven states and in one overseas territory will go to the polls to weigh in on the nomination process tomorrow. This year's Super Tuesday will be a far cry from the logistical nightmare we saw in 2008, where 24 states and one territory held their primary votes on the same day. After the dust settled, Hillary Clinton ended up winning 12 states to Barack Obama's 11. However, Obama ended up capturing 13 more delegates than Clinton, making him the real winner of the day for all practical purposes. This year, the question on everyone's mind seems to be if this year will be Hillary Clinton's Super Tuesday: could it be the beginning of another Clinton presidency?

Before 1992's Super Tuesday, Bill Clinton's campaign wasn't necessarily indicative that he would be the next president of the United States. In the Iowa caucus, he captured a mere 2.81 percent of the vote — almost a full 12 percent percent of caucus goers were undecided, even after the caucus was said and done. Next, in New Hampshire, Clinton was able to grab a second place finish and just about 25 percent of the vote before tanking to fourth place in the following Maine and South Carolina contests.

Heading into Super Tuesday, former Massachusetts Senator Paul Tsongas was the apparent front runner, stacking up five wins — more than anyone else in the field to date. These wins also came in diverse states outside of his native northeast: Arizona, Utah, Washington and Maryland, yet he trailed in delegates behind the young Arkansas governor.

On March 10, 1992, voters in the Southern states of Florida, Mississippi, Louisiana, Missouri, Texas, Tennessee, and Oklahoma all chose Bill Clinton as their favored nominee. Hawaii broke for Clinton as well, while Tsongas won his home state of Massachusetts with a clear margin as well as Rhode Island. If a similar result occurs this year, with Hillary Clinton sweeping up more conservative-leaning Southern voters who may be wary of a progressive, northeastern voice, the odds that she captures the nomination will jump. As it stands, Sanders is likely to win his home state of Vermont, as well as the liberal bastions of Colorado, Massachusetts and Minnesota, according to an analysis done by Bloomberg Business.

Of course, there is no guarantee that a Super Tuesday sweep for Clinton will guarantee smooth sailing; it didn't for Bill Clinton in 1992, according to none other than intrepid reporter Gwen Ifill! Up next are Nebraska, Kansas, and Louisiana, which cast their votes on Saturday, March 5. Nebraska and Kansas have similar demographic characteristics to Iowa, but with fewer delegates at stake. Public polling data for these contests is basically non-existent, and the superdelegate game is also by no means locked down: In Nebraska, only one out of five superdelegates have declared their preference to date. 2016 isn't your average year in politics, and anything can happen. The Sanders campaign has gotten where it is by not underestimating the power of the Clinton machine; hopefully, she is taking Sanders and his supporters just as seriously.