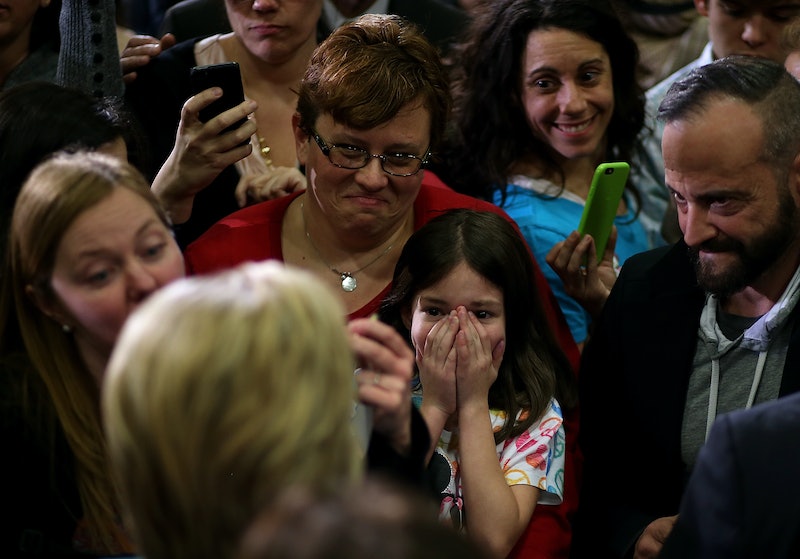 Throughout the months of January and February, 10 to 14-year-old reporters from the Scholastic News Kids Press Corp pursued exciting opportunities to interview 2016 presidential candidates — Donald Trump, Ted Cruz, Marco Rubio, Ben Carson, John Kasich, and Hillary Clinton. Like pros, most kids cut to the chase and asked the politicians which issues were most important to them. Met face-to-face with the young reporters, Trump and Clinton gave answers that aren't necessarily definitive of their campaigns thus far. In fact, their remarks indicate a sort of role reversal that's just plain bizarre. According to their interviews with the young reporters, Clinton is most concerned about the economy and Trump is dead-set on education. Is it just me, or does something seem a little off-kilter here?

On Feb 6 immediately following a Clinton rally at Concord, New Hampshire's Rundlett Middle School, Kaitlin Clark asked the candidate, "What is the most pressing issue facing the U.S.?" In response, Clinton vaguely explained how she plans to bolster the economy.

The most pressing issue is to get the economy to produce more good jobs for more people so that they can support themselves and their children. Then their children can do even better, because that’s what supposed to happen in America. So I’m going to work really, really hard on that every single day.

Inevitably, it comes as a surprise that Clinton wouldn't mention education, considering the fact that two of her campaign ads focus completely on school and student loans. If anyone was going to invoke that cash-money or jobs, I would have betted on Trump — yes, the free market's essential poster boy who kicked off his presidential campaign in June by saying "I'm really rich."

Instead of associating the economy with the "American Dream" every child looks towards, Trump said that children should be most concerned with education in this upcoming election. In Spartanburg, South Carolina on Feb 18, Gracie Wood made her way over to a local news station to ask the GOP candidate, "What should kids be paying attention to the most in this election?"

Education is so important. You have to find the political candidate who really wants to take care of education. And you should have local education [rather than standards like Common Core], so that great people like your mother can be involved.

Though Trump's answer wasn't reflective of his campaign's focus, it does suggest that he's more aware than Clinton of the young demographic he's addressing. But, don't be fooled by that momentary awareness. The insensitivity of his next comment seems to suggest that Trump is not your man if you're looking for someone who's genuinely concerned with prioritizing education. Wood managed to squeeze in another, more controversial and insightful question, "Presidential campaigns and candidates can be very vicious with each other. How do you explain to kids that [such behavior] is OK?"

Can't say I'd want that man teaching children right from wrong. Unfortunately, no candidate really gave thorough, informative answers. Instead, the kid reporters received vapid answers that neatly danced around the questions at hand. For example, GOP candidate John Kasich provided a not particularly in-depth response to Maxwell Surprenant's question, "Do you have a message for kids?" Surprenant approached the candidate on Jan 24 after a town hall meeting in Goffstown, New Hampshire.

Live your dream, and work hard.

On the other end of the spectrum, we have GOP candidate Ben Carson, who might have tried a little too hard to explain himself. On Feb 6, Clark, who also interviewed Clinton, asked Carson, "What is the most pressing issue facing America today, and how do you plan to solve it?" Carson assumed children (or even adults) understood what an "economic engine" is, replying:

One of the first things I want to do is release that economic engine, the most powerful economic engine the world has ever known, and get rid of unnecessary regulations and reform the tax code so that we have an environment that encourages entrepreneurial risk-taking. That way, we can once again churn up that engine and get the American economy growing so that by the time you’re an adult, we won’t be compromising the future.

At least he didn't try to explain how he's going to look at the "fruit salad of their life." Unknowingly, the middle school students resultantly shed some light on the way politicians morph their platforms according to who they're trying to sway. Furthermore, they helped demonstrate the candidates' overall lack of understanding when it comes to approaching children's concerns and taking into account their limited political knowledge. If anything, candidates need to realize that their responses to children could inspire them to become the nation's next politicians or, on the other hand, deter them from the field completely by making them feel inconsequential. Children may not be able to vote, but their concerns matter in this election nonetheless.