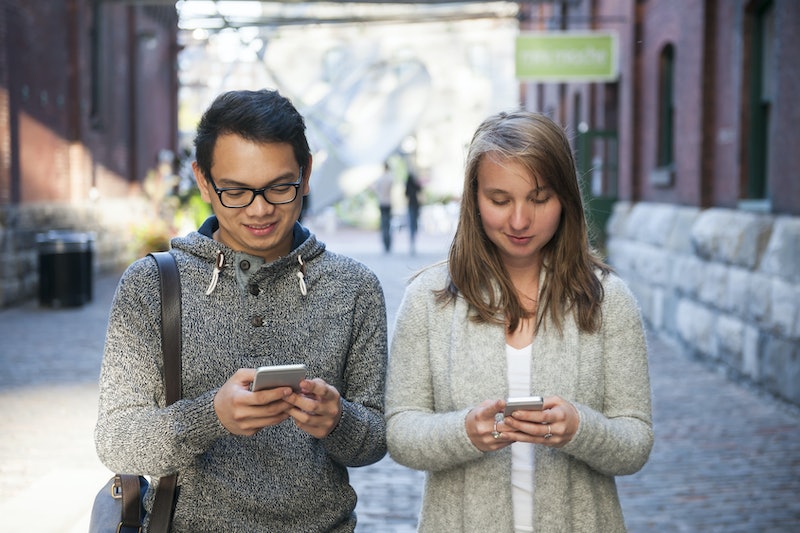 Online dating can be confusing, and the plethora of platforms is extreme, with dozens of options at your fingertips. But if you've narrowed it down to dating app Hinge, there are some easy-to-fix dating mistakes you might be making, according to a couple of studies that the dating app has conducted. The main takeaway is that, yes, it's very possible that you're accidentally putting your foot in your mouth, saying or doing things that are unintentionally putting matches off before you even get a chance to meet face to face. However, you can learn what these little pitfalls are, and find out how to remedy them in the future.

Hinge's data shows that some minor tweaks to things like messaging, swiping and even the day of the week you spend most time on the app can make a big difference in your long-term results. Don't just believe them, though — try out their suggestions, which are all based on data, and see what happens. Think of it as a dating experiment. What's the worst that can happen? More dates? Better online conversations? Matches you actually want to meet in real life? Let's all hope.

"If you use the word 'sorry' in your opener, you’re 56 percent less likely to exchange numbers," says Hinge. So do not apologize for a delayed response. Worse, don't ever use that word in your first message to someone. Since everything is heightened and condensed in these first messages, sending notes that contain the word "sorry" conveys an apologetic undertone. Not a good first look.

2. Skipping Over The Job And Education Section

Fill it out! Eighty percent of couples who met via Hinge included this info in their profiles and found it to be important when first evaluating a potential match. You don't have to go into great detail, but be sure you mention that you're a dog trainer and that you have a master's degree.

3. Suggesting Vague Times To Meet Up

"Suggesting vague time periods to meet up like 'this weekend' or 'next week' are indicators that the conversation is going nowhere and you’re 40 percent less likely to score a number," according to Hinge.

So if you like someone, see if they're free on Saturday afternoon for a stroll through the park. If they can't do it, but they want to meet, they'll come back with a counteroffer. If you bat around loose times, it's more likely the two of you will wind up getting bored or burnt out with plan-making and move on.

A case for peppering your conversation with more giggles or acronyms: "Conversations that include words associated with laughing like 'haha' and 'lol' had a 17 percent increase in phone numbers exchanged," says Hinge. So don't worry about coming off too basic or not sounding smart enough — drop some of these laugh-related comments into your messages, and get the party started.

I know, I know: Why swipe right on someone you're not excited to meet? But women who found their mate on Hinge were found to be 20 percent less picky than the average swiper, which resulted in the potential of more matches, which, apparently, resulted in a higher chance of a lasting match. So if you find her attractive, but there's something superficial you don't like about her, or if you find him interesting, but a little dorky, swipe right. See what happens.

6. Not Using Their Name

Did you match with a Penelope or a Dashiell? Tell them you love their name. "Noting what a cool name your match has will increase the likelihood of getting their number by 12.5 percent," Hinge says. Obviously, don't tell someone you like their name if you think it's stupid, but if you really think someone's name is neat, let them know.

To meet someone you actually want to be in a relationship with, you have to try out a bunch of duds (well — matches that are wrong for you personally). On Hinge, people messaged with an average of 16 people before their partner came along. Be patient and stay hopeful.

8. Giving Out Your Number Immediately

The sweet spot for number-exchanging seems to be about three days in, after about 25 messages have been lobbed back and forth, Hinge finds. Don't wait to exchange numbers forever — but don't hand out your digits right away, either. "Establish trust before meeting," Hinge advises.

Sundays receive the award for messaging, with a 36 percent increase in response rates on Sunday evenings in comparison to the rest of the week. Be sure to log onto the app on Sunday nights, and dash off some of your wittiest remarks.

You have to go on a bunch of dates before you meet your partner, Hinge says. But not too terribly many: Couples who met via the app generally went on four to five dates before settling in with someone long-term. Just don't expect to meet your future boyfriend or girlfriend as soon as you go on your first date. It's a numbers game, so you really never know.

More like this
18 Hinge Prompt Answers To Try If You’re Looking For Something Casual
By Lexi Inks
12 Active Date Ideas That'll Get You & Your Boo Outside
By Lexi Inks
50 Valentine’s Day Instagram Captions To Post If You’re Single
By Jessica Booth, Lexi Inks and Carolyn Steber
My Partner Wants Me To Wear A Diaper During Sex. Help!
By Sophia Benoit
Get Even More From Bustle — Sign Up For The Newsletter
From hair trends to relationship advice, our daily newsletter has everything you need to sound like a person who’s on TikTok, even if you aren’t.