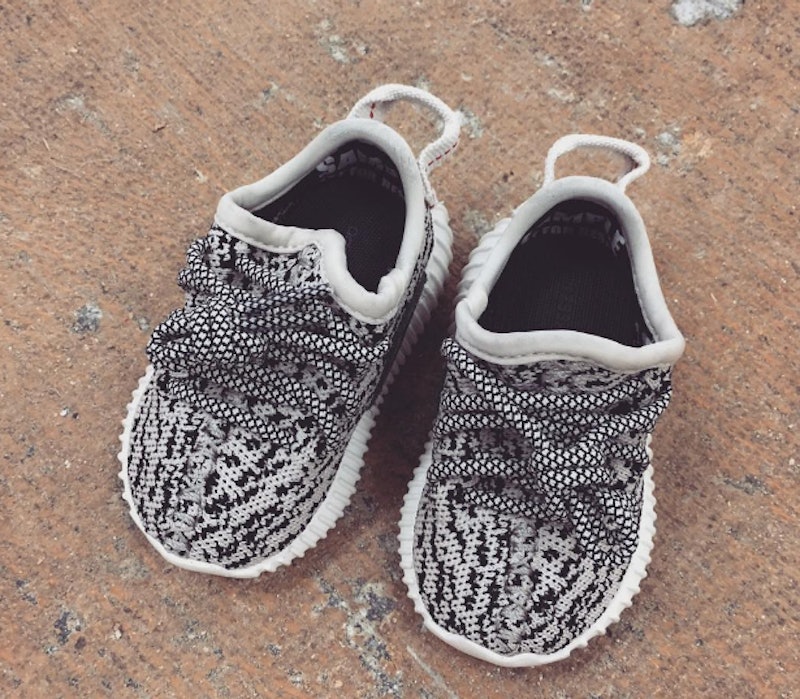 Have you ever walked past the baby section in a store and thought, "Aw, I wish I could wear that?" While that might not happen very often (I mean, lady bug prints don't work for every occasion), this might be the exception: Baby Adidas Yeezys are coming this summer. That's right folks — you might not have been able to get your hands on a pair of Yeezys, but now toddlers everywhere will be able to.

This means your little niece or nephew is going to be so much more fly than you come the end of summer. Can you even stand that? According to The Cut, "Baby Adidas Yeezy Boost 350s will be for sale starting in August in black, and a blue-and-cream mix." But while it's now confirmed, the news doesn't necessarily come as a surprise. According to High Snobiety, Kim Kardashian has been hinting about the product on her social media since spring. High Snobiety reported, "Kim Kardashian-West took to Snapchat to share a shot of her son’s extra special footwear for Easter. While officially there are no infant or kids sizes available for her husband’s much hyped YEEZY Boost 350, it looks like they might actually be on their way."

And on their way they are, and apparently the official news broke on TV.

The Cut reported, "On Sunday night’s episode of Keeping Up With the Kardashians, Kim turned the conversation away from Kourtney complaining about Tyga and Scott hanging out to share some much more important news." Talk about an exciting twist, eh? While any scoop on Tyga is fascinating, hearing that a new style of Yeezys is out is practically flooring.

But as to be expected, these toddler kicks aren't going to come cheap. According to Kicks on Fire, "A leaked image revealing which colorways to be offered has been provided as well, which will include the popular 'Pirate Black,' 'Turtle Dove,' and 'Beluga' finishes — with each suggested to retail at $120 each." While nothing is confirmed yet, one thing is for certain: It takes money to make your baby as fly as Kanye. And you better believe many people would love to see their little ones channeling their inner West.

And who knows, maybe you yourself can cop one, too. Just to say you finally own a pair of the coveted Yeezys!

More like this
How To Wear A Bucket Hat Like Rihanna, Dua Lipa, & More
By Allie Fasanella
Billie Eilish Teased The Debut Of Her New Fragrance
By Audrey Noble
Fermented Skin Care's Barrier-Boosting Benefits, Explained By Derms
By Audrey Noble
13 Caffeine-Infused Eye Creams, Patches, & Serums For Puffy Under Eyes
By Olivia Rose Ferreiro
Get Even More From Bustle — Sign Up For The Newsletter