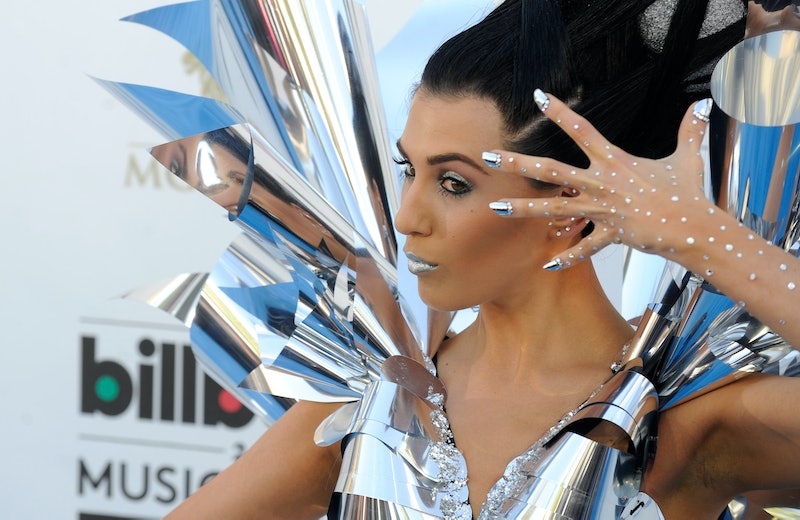 Unlike the Oscars or the Academy Awards, the Billboard Music Awards are a time for musicians to let their creativity fly free when it comes to wardrobe. There's been everything from head-to-toe feathers to actual dogs walking the red carpet, so you really never know what you'll see next. Some of the craziest Billboard Music Awards outfits of all time come from the best musicians, so maybe there's a method to all the madness. You won't believe the over-the-top trends that have walked the red carpet in the past, until you see them for yourself.

Since the beginning of the awards show, people have been using the night to put together the most standout looks that they possibly can. Whether the musicians are going for wearable art or trying to keep up with the hottest trends, they craziest looks definitely succeed in attracting attention. What makes the night so sartorially bizarre is that there's no dress code, so people just go with their gut.

I could sit here and describe the outfits to you all day long, but you won't fully understand the magic of the Billboard Music Awards red carpet until you actually see the wildest looks from the event. You should be warned though — you'll never be able to unsee these fashions.

The singer came on stage looking like some sort of cowboy muppet in the all red outfit. Not exactly sure what he was going for, but it definitely was something to look at.

There was a whole lot of fringe going on in Cher's Billboards look. She also wore a red crown just to confuse you even more.

The women came on stage in black and white onesies looking fierce, but their handcuff accessories really took it to another level.

Usher has been know for some interesting outfits over the years, but the craziest of all was when he wore a floor-length white fur coat.

His denim on denim also gets an honorable mention.

So this happened. If that doesn't scream '00s, then I don't know what does.

Her performance this year was definitely one to remember, and so was her fashion. She went from this ruffled look to something a little less over-the-top...

The end result was super glam.

Between the massively tall heels, blue hair, and pink stockings, I don't know what to look at first.

The singer walked the red carpet and took the stage in an Elvis outfit. Why? I have no idea.

Twain opted for a bandage-style shirt with a big lips on it for one of her first Billboards.

Spears had the most bizarre accessory of them all to go with her teeny-tiny dress — a small dog.

I'm just going to leave this right here for you to take in.

Spears wasn't the only one who brought her dog as a date. Not sure how the pooch ties into the outfit though.

Kid rock decided to opt for no shirt at all when he took the stage at the Billboards.

This took monochrome to a whole new level.

Her pants were definitely unconventional, but there was something about this look that kind of worked.

How she walked in those shoes, I have no idea.

I don't know which look is crazier, his uncomfortably low button-up or the visible boxers on his date.

Bieber took the stage to perform in head-to-toe leather that ended up half-off by the end of the song.

Don't worry though, there was a leather shirt underneath.

The combination of the lime green dress and black and yellow hair is something only the '00s could handle.

I can't wait to see what other outfits get added to the list this year!