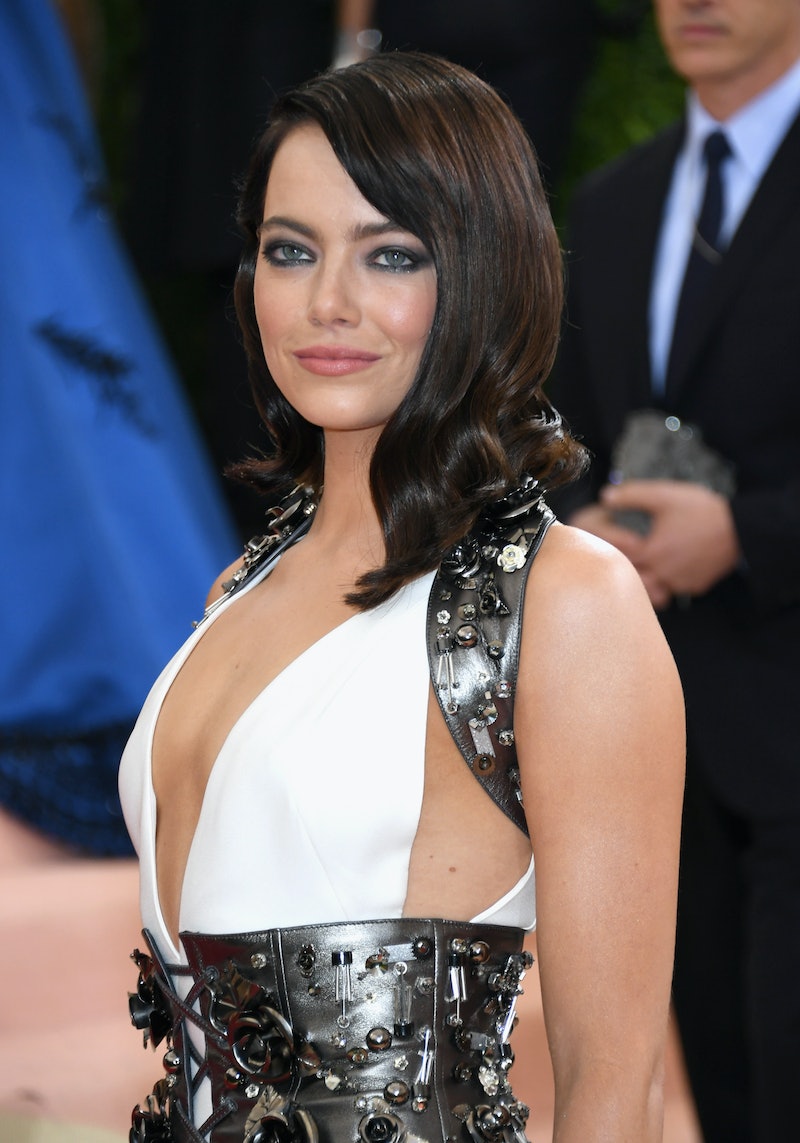 With summertime approaching, a lot of people are itching to try something new and play up their look. And it appears that Emma Stone falls into that category, seemingly switching up her aesthetic every couple of months. According to People, Emma Stone is platinum blonde now, repping a messy shag that's left me wondering whether this new look is for real. She wouldn't be the first celeb to try on a new style just for a day or two, what with Gigi Hadid faking bangs and Kim Kardashian's all-too-real platinum hair. With the use of extensions, clip-ons, and wigs, one can't always be sure as to whether what a celeb is stepping out in is their new and permanent 'do or not.

Only in Apr. 2016 did Stone dye her hair brown, changing her look drastically from her trademark red-headed style. But it appears that she was in the mood for another major transformation, making one realize just how much a hairstyle can metamorphose a human. But the question remains: Are the blonde locks real, or just a wig for a weekend of identity experimentation?

According to Just Jared, the look is probably real. Just Jared reported, "Emma Stone steps out of a salon with a brand new platinum blonde hair color on Saturday (May 21) in Beverly Hills, California."

If you're stepping out of a hair salon with a brand new cut and hue, chances are that your hairstyle isn't just an expertly-placed wig. Instead, one can believe that this is Stone's fresh new change for the summer.

Not only is the color striking (and such a huge 180 from the brown hue she got only recently), but let's focus on the shag for a minute. The actor is rocking blunt, heavy bangs, but she's also channeling the '70s aesthetic like a pro. With choppy, messy layers, Stone is stepping into a hair trend that seems to be hot this season.

People noticed, "Some people have compared her new hairstyle to Taylor Swift's wavy platinum blonde bob, which she first showcased on the cover of Vogue's May 2016 issue and later at Coachella 2016."

It seems like the choppier the bob this season, the better! But whether Stone will keep this new look for more than a couple of months is up in the air. Regardless, you have to admire her casual outlook on her mane. Instead of stressing about it, she just jumped in and tried something new. That right there can be a total inspiration to those watching at home.