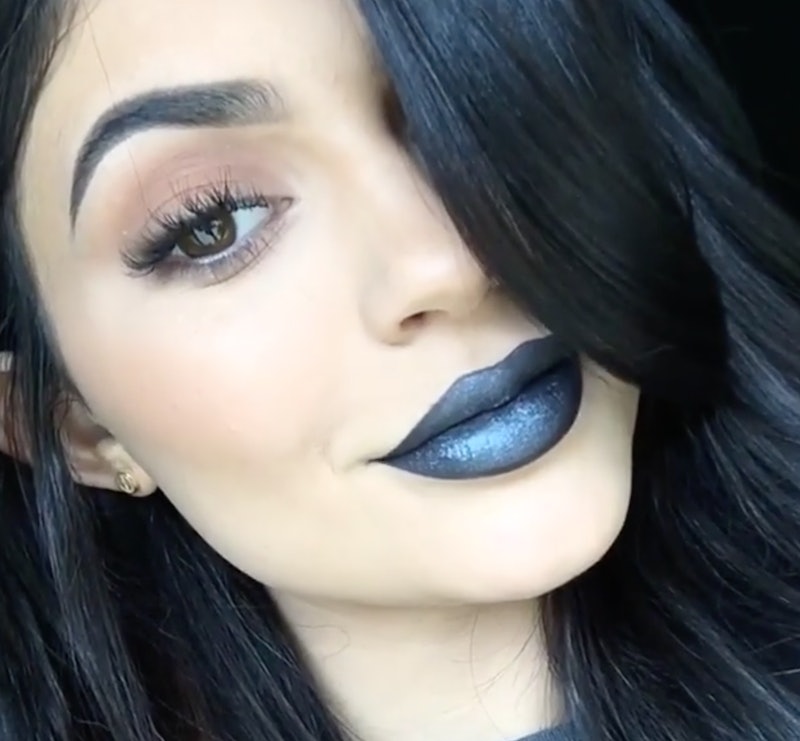 I'd like to take a second to remind everyone that I called this back in February. Kylie Jenner just debuted Majesty, her black Metal Matte lipstick, which is coming soon and has a blue x black x silvery sheen. It's such a three-dimensional shade, based on the social media photos and videos that the teen makeup mogul shared. It's her fourth Metal Matte and her sixteenth shade overall! Back when she revealed the shades in her Valentine's Day trio, she initially shared the dusty pink Posie K and the rich red Mary Jo K. Before she revealed the pale pink and Khloe Kardashian-inspired Koko K, I predicted Jenner would do a matte black Lip Kit, since she was fond of both black and blue lip looks in 2014, which was her "Kylizzle" period. She has since moved away from dramatic, super dark lips and her "King Kylie" lip era has been marked by neutrals. But Majesty is her best lip shade yet and I will tell you why.

But let's get two things out of the way first. I was wrong at the time of my prediction, since her third Val Day color was pink, not black. Also, Majesty is a Metal Matte, so it's technically not a Lip Kit. That means it won't come with a lip liner. It also has a metallic sheen so it's not the deepest matte texture. But why is this adventurous shade her best, even though it's not wearable by everyone or for every occasion?

Well, I love the fact that you can probably repurpose it as a sooty, smudgy eyeshadow or lower lashline eyeliner. You can probably even mix it with mascara for a little more depth, if you want to get creative. But that's not the main reason Majesty takes the Kylie Cosmetics crown.

It's her best shade yet because it's not a neutral. It's edgy. It also appears black in some light, blue in others, and silver in others. It's constantly renewable and customized, based on lighting and how many layers you swipe on your pucker. That's what makes it so damn amazing.

Sure, the crimson Mary Jo K and the deep and gothy purple Kourt K are dramatic and require brave wearers. But Majesty is on a whole other level. Jenner has pretty much exhausted the neutrals family and therefore she made total left turn here.

I also have to applaud her for not simply replicating her past matte black lips looks, as well.

The look above, while stunning, is so 2014. It's 2016 and King Kylie opted for the silvery sheen, making it a modern update of her prior obsession with blackened lips. King Kylie keeps moving forward, even when she is self-referential.