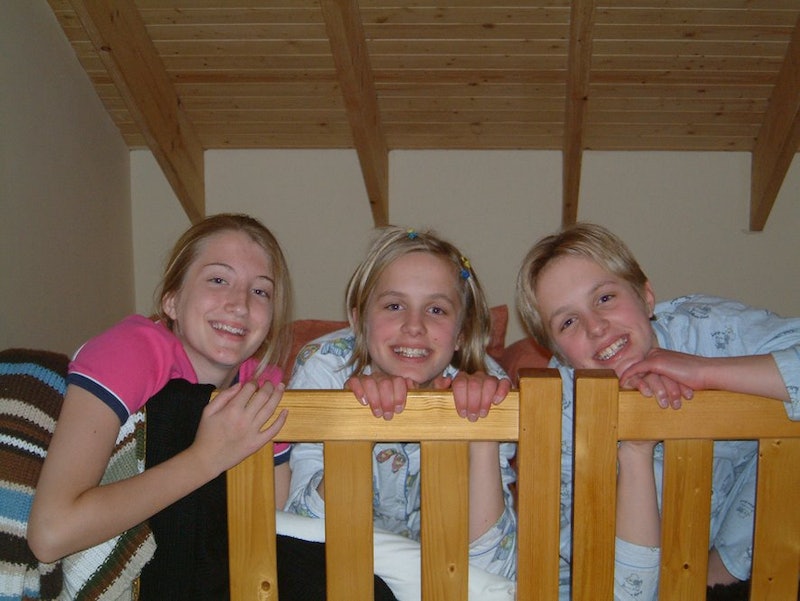 During this odd, pre-teen phase, you may have experienced a lot of emphasis placed on the way you looked. This included how you dressed, styled your hair, and whether or not you wore makeup. If you belonged to an early ‘00s subculture — for instance, if you were an emo kid — there was still no reprise from obsessing over how you appeared. Trendy clothes and styles to wear existed no matter what subculture you belonged to.

So when it came to sleepovers, you had to make sure you were rocking some cool threads. You’d likely arrive to the host’s house in casual attire and then you’d all change into your PJs shortly after the last guest arrived. If you were still rocking Disney pajamas over the age of 11, you were seen as childish, which is totally hilarious now. Millennials aren’t afraid to show the world their love for Disney movies circa 2016, after all.

If you wanted to navigate those crazy, pre-pubescent times, you needed to make sure you were wearing at least one of the following at a sleepover, in order to be one of the cool kids.

Paul Frank was super cool in the '00s and it hit a wide variety of subcultures. Emo kids, surfer kids, and mainstream kids all wore Paul Frank pieces and it was something we all had in common. Paul Frank pajamas were a way to wear cute animal print jammies without looking babyish.

Although you probably didn't wear blue mascara every day — your school may have had a strict dress code — you jumped at the chance to wear your favorite makeup. Your parents would look at you bewildered as they dropped you off at your BFF's house.

You'd be sitting pretty in the back seat wearing your coolest threads, a flawless hairdo, and a full face of makeup including blue mascara. It still baffles them to this day why you used to attend sleepovers looking so dolled up, especially considering you and your friends did each other's hair and makeup all night anyway.

If you had an older brother or sister, you might have sneaked into their room and grabbed one of their awesome T-shirts off the floor to wear to a sleepover. The designs were of rad bands your friendship group had never heard of, or tees making a nod to movies you weren't allowed to watch yet. Either way, your buddies thought you were beyond cool when you turned up to a '00s sleepover in an older sibling's tee.

The ultimate item to wear to an early '00s sleepover was a fancy robe. You'd get extra cool points if your robe looked remotely like the ones from Christina Aguilera, Pink, Mya, and Lil' Kim's "Lady Marmalade" performance at the 2002 Grammys. We felt like little women watching the PG-13 Moulin Rouge! and if you wore a silky or embellished robe, you were the epitome of cool. You might have even been the leader of your girl gang.

You wore an eye mask to feign maturity, because you'd seen your mom wear hers at a spa that one time. You pretended to fall asleep in it and when everyone else was snoozing, you whipped it off. Who the hell actually sleeps in an eye mask?

All of the trendiest celebs were rocking streaks of unnatural, rainbow colors in their tresses. So the only way to emulate them without your parents grounding you was to opt for clip-in extensions instead.

Sleepovers were one of the only times when your friends may have caught a glimpse of you in your underwear. It makes me cringe when I remember my tween self, trying desperately to look grown-up among my well-endowed friends. Thus, I had to resort to underwired bras with a whole lot of padding to make me feel like I fit in. Wasn't adolescence a blast?

Ankle bracelets served as a whimsical memento from your family vacation and gave your look a laid-back vibe. You appeared way more approachable when rocking one of these babies.

If you're someone who has naturally pale skin, chances are you lathered on fake tan like there was no tomorrow in the '00s. You didn't want to feel left out when your friends were showing off their sun-kissed vacation skin, so you borrowed some of your older sister's roll-on lotion.

That said, you might have left a little orange surprise for your friend's mom on the bedding you slept on.

You likely pinched a blob of this out of the bathroom cupboard and used it on your legs after secretly shaving them. Your friends who weren't allowed to shave would be so jealous of your silky smooth pins and your delicious, coconutty aroma.

Crimped hair was everywhere in the '90s and early '00s. Some of our fave pop culture princesses with crimped hair were Christina Aguilera and queen Lizzie McGuire. You might not have gone for a full crimped 'do, considering you'd be sleeping on it, but a few crimps would definitely make you look super trendy.

You'd soon forget about your appearance and fall asleep with your makeup on and a tummy full of candy and soda, all while Bring It On played in the background.

More like this
The Chicest ’90s Updo Hairstyles To Try
By Paris Giles and Rachel Lapidos
'The Parent Trap's Elizabeth James Was Basically Princess Diana & These Looks Prove It
By Orla Pentelow and Claire Fox
The New Grey's Anatomy Interns Have Fans Feeling So Nostalgic For Season 1
By Brad Witter
The Best 'Grey's Anatomy' Intern Moments, From MAGIC to Glasses
By Grace Wehniainen
Get Even More From Bustle — Sign Up For The Newsletter