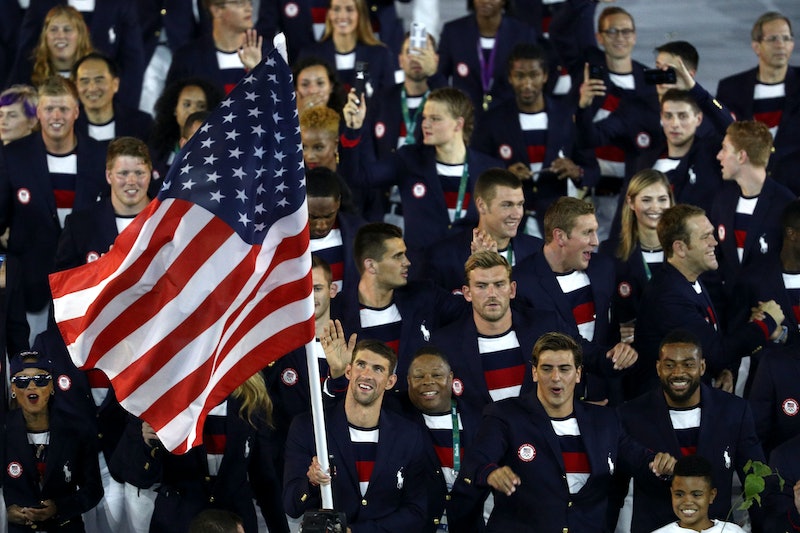 You've probably already seen Twitter's reaction to team USA's opening ceremony uniform, and it hasn't been entirely... nice. The look was unveiled last week by designer Ralph Lauren and the United States Olympic Committee, according to Alison Daye on CNN.com. And, as with past years, many people have had some strong opinions and critiques.

The uniforms are pretty classic, and undoubtedly American— spiffy blue blazer, crisp white pants, striped shirt. But that's not the problem. The problem, as several Twitter users have pointed out, is that the team's striped t-shirt looks a lot like the Russian flag. Of course it was unintentional, but they make a mildly horrifying point.

Other Twitter users have been complaining about the giant Ralph Lauren logo that's prominently featured on the blazers. The designer, who has been the official outfitter for the U.S. Olympic and Paralympic Teams since 2008, according Daye, has raised eyebrows for this logo before.

The opening ceremony uniforms for the 2012 Olympic games in London also featured blue blazers and white bottoms (with neckties, instead of t-shirts), and that giant pony logo. Same was true for the opening ceremony look during the 2008 games in Beijing, which showed off blazers, light-colored pants, a white newsboy cap, and (you guessed it) the logo.

First off, here's what the uniforms look like if didn't see.

As well as one keen eye who spotted the resemblance to the Russian flag. (Yikes!)

Some thought the look screamed "sailor."

Others wanted to snag the style for themselves.

Even though it is mega preppy.

But hey, we do kind of look the best.