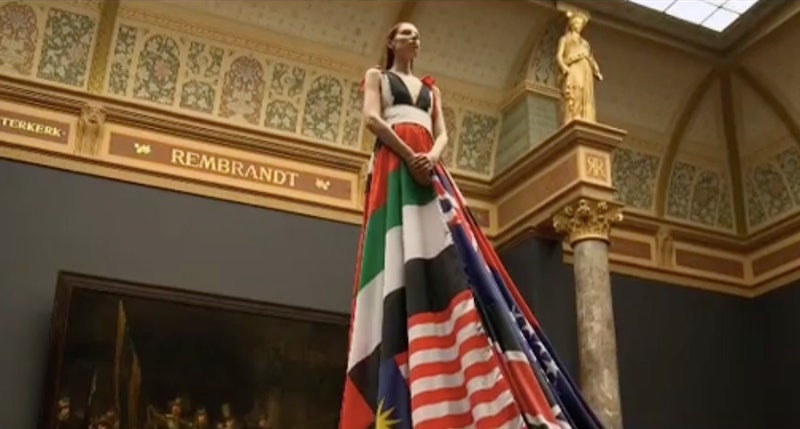 A team of designers made history on August 5 at Amsterdam's EuroPride when a transgender model wore a dress made of flags where homosexuality is forbidden. Model Valentijn De Hingh debuted the powerful piece at the opening walk of EuroPride, where all 72 flags came together to make a powerful statement: that despite our best efforts, the plights of members of the LGBTQ community globally are far from over. Originally conceived by fashion designer Mattijs van Bergen and artist Oeri van Woezik in partnership with the Dutch advocacy group COC, the flags represent countries that still regulate gender expression and sexual identity — some even with punishment by the death penalty — and the stunning, impossible length of it demonstrates just how much work is left to be done.

As powerful as the dress is in its current form, it is, thankfully, far from finished. In fact, it will hopefully be redesigned another 72 times. For every time a country changes its legislation to legalize homosexuality, their flag will be replaced.

"That little lady wearing the big dress is me," wrote model De Hingh wrote on Instagram, explaining the end goal. "Every country that changes its legislation will have its flag replaced by a rainbow flag. Let's hope this dress will represent a patchwork of rainbows sooner rather than later!"

The iconic photograph of the dress currently making the rounds online was taken by photographer Peter Henket, who posed De Hingh in front of the painting "The Night Watch" by Rembrandt, currently displayed in Het Rijksmuseum, a Dutch museum in Amsterdam.

"I am so proud to see many thousands of people share my photo all over the world to spread the love," wrote Henket on Instagram. Since this morning, #amsterdamrainbowdress has already started cropped up as its fitting nickname.

Hopefully we'll see more and more of the rainbow peeking out of this dress with every subsequent EuroPride, until we finally can mark the year when this stunning creation is a sea of rainbows.