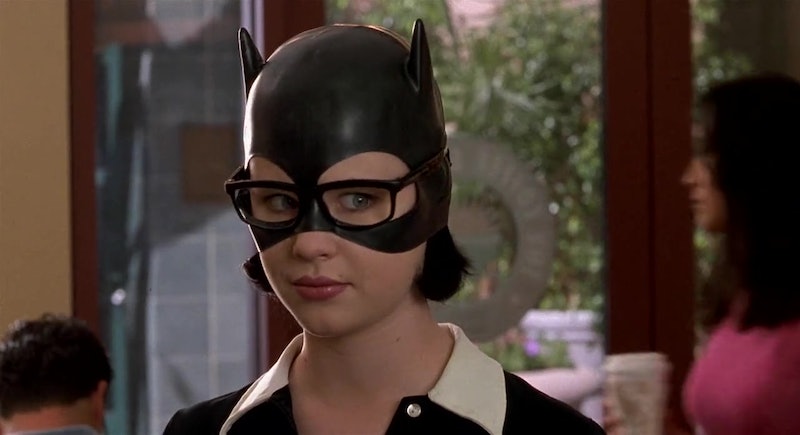 Growing up, there weren't many women across film and TV who I could relate to. Discovering Ghost World on VHS and subsequently reading the graphic novel felt like hitting the jackpot. Enid Coleslaw of Ghost World became my alternative style icon. The fact that she was part of a movie about friendship and growing up that wasn’t all sleepover clubs and happy endings was all the better.

Since the film's 2001 release, I don't doubt that she has inspired the minds — and wardrobes — of young women everywhere. And in a time during which we're finally starting to celebrate bodies, styles, and views outside of the mainstream, I think it high time to celebrate Enid's role in allowing me to embrace my own weirdness.

Originally a graphic novel followed by a film starring Thora Birch and Scarlett Johansson, the Ghost World movie is an untraditional tale of two besties. Enid and Rebecca Doppelmeyer seemingly only got along due to their shared distaste for everything and everyone around them. Both are hyper-cynical in their dissection of popular culture, their dead-end suburban hometown, and their peers. Lines such as, “I think only stupid people have good relationships,” “Some people are OK, but mostly I just feel like poisoning everybody,” and “If he’s so weird, how come he’s wearing Nikes?” are arguably as relatable to anyone who doesn’t fit in today as they were 15 years ago.

Even though Rebecca was as scathing and quick-witted as her bestie, however, it was really Coleslaw who captured my attention upon my watching Ghost World for the first time. Her style — both in personality and in clothing — helped shape my own perception, and ultimate acceptance, of myself.

Enid wasn’t the archetypal "cool girl" I was used to seeing everywhere at the age of 15. She wasn't the Kelly Kapowski or the Cher Horowitz or the type of girl author Gillian Flynn penned a perfectly lament-fueled rant about in Gone Girl. She wasn't the type of cool girl seemingly created under patriarchal values to please the needs of men. Instead, Enid Coleslaw’s identity, even if crafted by male author Daniel Clowes originally, came closer to my experience of teenage girlhood and early womanhood than most other depictions of characters my age.

Enid wasn’t only interested in finding the love of her life, either. As much as I adored characters such as Andie in Pretty In Pink, Cher in Clueless, and even Veronica in Heathers, I could never quite get my head around their motivations. Instead, Enid stumbled through life struggling to find her place in the world, failing summer school, losing university scholarships, and falling for older dudes. Her existence was un-romanticized and ugly in a way that more closely mirrored my own experiences as an awkward goth in training than most other polished, pseudo-rebellious portrayals of teen-dom onscreen.

Enid was also apathetic, unambitious, disinterested in most of the world around her, and even selfish to the needs of her best friend as they slowly but surely crept apart. On paper, she was a completely unlikeable character. But her uncouth narcissism and deadpan ironic sense of humor are what made her endearing to me: Someone sick of seeing perfectly preppy depictions of the teen experience.

Like so many real-life teen girls and young women, Enid was utterly unimpressed by the world around her and most of the humans in it. She was unwilling to navigate the space between "teenage girl" and "fully fledged adulthood" that she found herself in post high-school graduation; unwilling to conform to everything girls are generally expected to become; unwilling to find a way to fit in with a world she never fully felt she belonged to.

Millennials are arguably increasingly taught to go through life with ruthless ambition, complete clarity on how our lives will pan out, and unwavering enthusiasm for our career path of choice. But Coleslaw — even before I could conceptualize these things — reminded me that having my shit together wasn't always going to be possible, or even necessary.

Overall, her character’s personality and core being were built on what she disliked rather than what she was passionate about. When Enid tried to verbalize her feelings towards middle-aged, loser love interest Seymour, she summed it up as, "He’s the exact opposite of everything I really hate.” Unlike Rebecca, who goes on to get a ~normal~ job and enter into standard adulthood, Coleslaw never has a lightbulb moment after which her whole life falls into place with natural ease. Instead, she continues to be difficult, stubborn, and disenfranchised — much to the criticism of everyone else around her.

But it wasn’t just her bad attitude that made me fall in love with Coleslaw as a character. Her outcast sense of style physically set her apart from every normative person both within the Ghost World universe and the IRL world, including her best friend Rebecca.

Although Rebecca largely conformed to what was perceived as "normal" in terms of her clothes, Enid used her wardrobe as an active tool of rebellion. Whether by dyeing her hair green just to be mocked by the local record store worker, donning latex cat masks bought at sex shops, or trawling through yard sales for second-hand clothes and old records, she wore her weirdness as a badge of honor.

Many teen movies seemingly seek to remove and change "difficult" women, transforming them into more acceptable, stereotypical visions of femininity through awkward makeover scenes — just see Tai evolve from a stoner slacker into a high school prep in Clueless or Allison going from loser outcast to the apple of the jock's eye in The Breakfast Club. But for better or for worse, no one is able to alter Coleslaw’s attitude or appearance but herself.

Ultimately, Enid taught me the value in being weird. She proved that changing myself in order to "fit in" wasn't the key to a self-fulfilled existence. Her unwillingness to metamorphose into something cleaner, simpler, preppier, or easier showed me that there was no valid reason for changing myself to appease others. Her inability to "just be nice" or "normal" broadened the spectrum of visibility for women who’ll never fit the cookie-cutter mold of normative femininity, and for those reasons, she's stayed with me ever since.