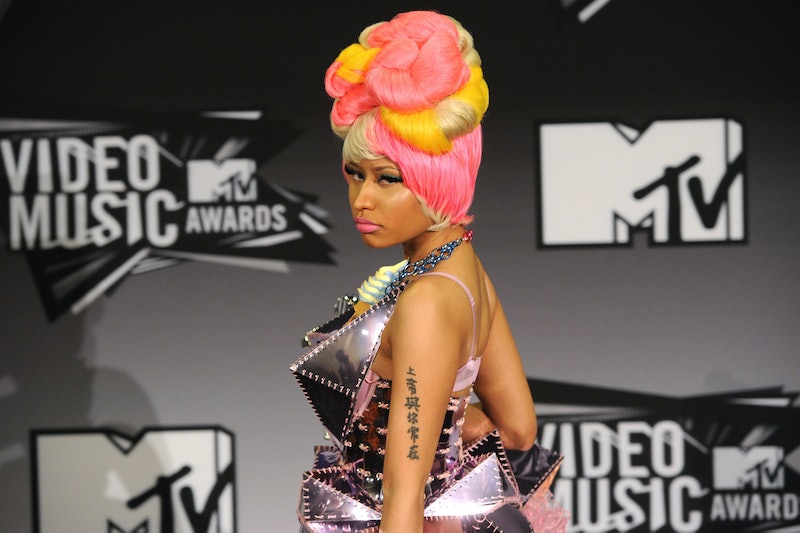 Moon-man performances may be the highlight of the MTV Video Music Awards, but I'm usually more amped to see how far celebs will go with their red carpet looks. Most A-listers seem to be on the same sartorial page: They either rock the craziest VMAs outfit money can buy or accept the fact that showing up is kind of pointless otherwise. So who, in VMA history, reigns the category for craziest ensemble to ever walk the carpet?

Well, when it comes to award shows like the Grammys or Oscars, we're guaranteed to come across total elegance. The VMAs, however, are an entirely different story. Celebs usually manage to find the most revealing, outrageous, and downright tacky garments designers are conjuring up.

There was Rose McGowan's iconic 1998 dress that left little to the imagination. Miley Cyrus' 2015 VMA outfits kept getting wilder and wilder throughout the show's run. And Katy Perry and Riff Raff's double denim in 2014 took us down VMA Memory Lane as they channeled Britney Spears and Justin Timberlake's coordinating 2001 ensembles.

As ridiculously memorable as some of these looks were, however, it's Nicki Minaj who was the icing on the cake regarding the craziest VMA outfit of all time. In late 2010, her Pink Friday album had just propelled her into stardom. By 2011, we were still seeing the eccentric style that defined her career beginnings. Minaj took her unique aesthetic to new heights when she threw everything but the kitchen sink onto her 2011 VMAs dress.

I don't know if any other VMA red carpet look could ever top Minaj's Harajuku-esque getup. Her Amato Couture dress consisted of a futuristic bodice made of metallic geometric panels with a pink lace underpinning, after all.

She also wore leg warmers featuring cartoonish doodles scribbled down the limbs, and a pair of star-patterned tights underneath it all. As for her shoes — or lack thereof — I honestly have no idea what I'm looking at. Her entire bottom half looked like footy pajamas with furry friends for toes, but I'm not complaining.

In true Nicki Minaj fashion, the only way to complement an outfit like this was going to be with unconventional hair. I'm reminded of swirled, multicolored marshmallow lollipops every time I see this twisted up-do.

It would seem that her hair and dress alone weren't colorful enough for the hip-hop queen, though. She just had to throw on a Shojono Tomo mask to add even more spritzes of color into the mix.

Of course, the only appropriate accessories for this look were going to be childish and oversized. Minaj's neckpiece was a giant cotton candy-swirled ice cream cone, paired with the kind of bracelets you probably made at your first slumber party. Notice that her nails even got in on the overwhelming action with a festive design.

And how could I forget about that chain of strange toys she had attached to her leg? The crazy combo was made of a star-spangled stegosaurus and a gummy bear-patterned giraffe (or camel, or maybe a horse) stitched together.

Personally, I feel like an intense acid trip had to be involved in the creation of this kind of out-of-this-world ensemble.

My guess is that Minaj will go in a completely different route for the 2016 awards. I'm picturing her in an effortlessly sexy, polished dress for Aug. 28's show.

Starting in 2014, she began rocking sleek hair more often, with neutral makeup and a toned-down wardrobe. Even when she breaks out the blonde wig nowadays, she often keeps her 'do on the simple side, free of all the crazy colors, details, and accessories she was known for rocking during her rise to fame.

But this bizarre 2011 VMA look did happen and I will never forget it. For better or worse, I'm looking forward to seeing what outfits will grace MTV's red carpet this year. Hopefully, we'll get the pleasure of seeing another look that'll make us do a serious double-take.

More like this
Everything To Know About Taylor Swift’s 10th Studio Album, 'Midnights'
By Grace Wehniainen and Jake Viswanath
Bella Hadid's Flare Jeans Under A Dress Outfit Is So Nostalgic
By Allie Fasanella
Hailey Bieber’s Moody Black Mani & Vampy Lips Are Peak Fall Vibes
By Audrey Noble
Bella Hadid's Best Runway Looks From Paris, Milan, & More
By Allie Fasanella
Get Even More From Bustle — Sign Up For The Newsletter