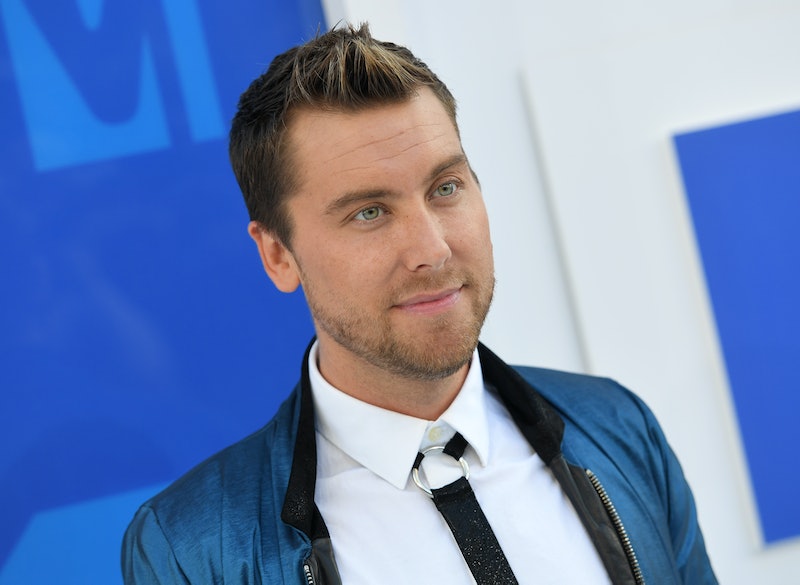 With all our attention on celebrities like Beyoncé, Adele, and Nicki Minaj, it was kind of refreshing to see Lance Bass at the MTV VMAs. And even more refreshing? The fact that his outfit made quite the statement.

The NSYNC singer showed up on the MTV white carpet looking dashing, as per usual. Everything was seemingly ordinary (well, as ordinary as life can be when you're awesome and your name is Lance Bass.) He was posing for photos, throwing up peace signs, and lookin' good in his blue jacket.

But then he turned around to reveal some black tape on his back spelling out a very moving sentiment. The design appeared to be made out of black duct tape (maybe he did it on the limo on his way there?) and spelled out "Love Trumps Hate."

A few weeks ago Bass was interviewed at the Democratic National Convention by Bria Janelle. Lance told her that he's "not a political person," but that he "kept seeing Trump rise and rise and rise," and it made him nervous for the country. It's possible that his VMAs jacket is related to his politics, but either way it's powerful and important message. Check it out.

His outfit is just as cool from the front, too.

His is bound to be one of the most interesting looks of the night.

More like this
Kate Middleton's Tribute To The Queen Also Had A Connection To Princess Diana
By Sam Ramsden
Bella Hadid's Flare Jeans Under A Dress Outfit Is So Nostalgic
By Allie Fasanella
7 ‘Ugly’ Trends Kendall Jenner Makes Look Cool
By Allie Fasanella
These Are Kylie Jenner's Best Paris Fashion Week Looks... So Far
By Dominique Norman
Get Even More From Bustle — Sign Up For The Newsletter