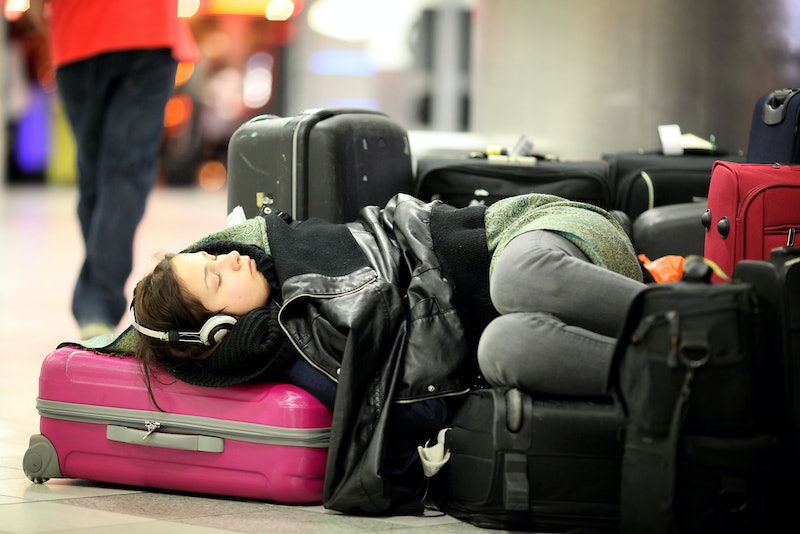 This weekend is Labor Day, and for many of us, that means travel. Personally, I've just come back from the worst holiday in my life — and that’s a hard-won accolade. It had everything from broken buses to broken bones, with virtually every other conceivable misfortune thrown in (and a few that were inconceivable too). As a veritable connoisseur of holiday disasters, I can now give some experienced advice on how to escape, avoid, or work through travel nightmares.

My qualifications are lifelong: My family attracts bad luck on vacations. There was the time when we got on the wrong train and ended up, not in Milan, but in a potato field. There was the skiing accident where my mum nearly severed her bottom lip. There was the illness in midair that meant our plane nearly had to perform an emergency landing in Arizona. (They really do say "Is there a doctor on the plane?" into the announcement system, by the way.)

A lot of these fixes involve a bit of effort, but don’t worry — I’m not advocating carting four suitcases and an entourage wherever you go, Victorian aristocracy-style. (Unless that's your jam, in which case, you do you.) Here's how to deal with just about every travel disaster, especially if you're planning on traveling abroad.

Trains get canceled. Buses grind to a halt. (In my case, in the middle of a highway on the way to the airport, with a non-English-speaking bus driver.) It happens. And it usually happens when you're on your way to catch a flight. If you're flying, always leave plenty of time to get to the airport. I don't care if you live 10 minutes away and only have hand luggage — the day you fly will be the day the road is closed because a popcorn truck exploded. Budget cautiously (at least two hours) and you'll have a big window of error.

Also always carry cash on you — if you have to get onto another mode of transport at short notice, you don't want to be fumbling for payment — and write down the number of your airline's desk before you leave. If you're only running a little late, they might appreciate the advance notice and give you advice on how to rush through security, and if you're going to miss your flight, you can ask for info on what to do to get on a later one.

My beloved teddy bear, who travels with me everywhere (I am 26 and married and you can take your judgment elsewhere), now smells distressingly of aloe vera. Here's my advice: Wrap and seal all potential leakage risks in plastic bags.

Always pack toiletries and a change of clothes in your carry-on luggage in case your luggage is diverted or misplaced. (You don't want to spend your first day abroad buying underpants.) Keep hold of your luggage receipt for anything you checked in, and if your luggage has been lost, don't wait to see if it turns up — notify the airline immediately.

And this is the big one: Always, always have travel insurance. I know it's a hassle and seems expensive, but seriously, you will be grateful if disaster strikes.

Again, travel insurance is a big deal here, but the best way to cope with this kind of disaster is to talk to your airline. If it's their fault, they're obligated under law to compensate you in some way, perhaps by putting you on another flight or putting you up in a hotel overnight. Know your rights before you fly, as they differ from country to country. The EU, for instance, has laws requiring you to be compensated if the flight's not canceled because of weather. Good to know.

Also keep all the numbers and emails of your hotels handy. If you're going to be late, notifying them is key if you want to avoid being charged.

You've arrived, you've collapsed, and now the neighbors are watching a Spanish telenovela till five in the morning and jetlag is kicking your butt.

Always pack earplugs, and take steps to deal with the jetlag by avoiding naps in the daytime, no matter how tempting they may be. And don't drink alcohol on the flight — trust me, it doesn't help.

We can't change the weather, but we can be adaptable. Do what your mother said and pack at least one sweater, a pair of closed-toe shoes, and an umbrella. Make sure your electrical stuff and passport/travel documents are sealed in something waterproof.

And get out there despite the rain: Find the undercover options in your holiday destination, or just give the clouds the middle finger and go swimming anyway. (Just don't swim when there's a lightning storm.)

Nobody has any excuse to be sunburned any more, but if you're like me and manage to get second-degree burns anyway, here's how to deal:

Take ibuprofen to reduce the swelling, use cold compresses or have a cold shower, and cover burns with a soothing cream. Pack aloe vera or witch hazel lotion, or make your own soothing cream out of crushed-up wet aspirin.

My holiday experience included a charming period with no running water (burst pipe). If this happens to you, first curse the gods, then buy some wet wipes. They're brilliant, but do not use them on intimate areas (they can give you a yeast infection).

More broadly, if you're in a hostel with shared bathroom facilities, pack shower shoes and your own towel, and make friends with hand sanitizer. And a stockpile of pads or tampons is always a good plan. Just. In. Case.

This one sucks, but if you're traveling with friends or a partner and suddenly a schism forms, you need to do something about it — and fast. If one of you wants to go to the pool and the other wants museums, go your separate ways for a day: Remember, you don't need to do everything together.

The most common cause of vacation fights, though, is lack of preparation by somebody — try to make sure that everybody is up to date on the bare minimum, and figure out a budget ahead of time, so you're not stuck in a restaurant arguing about how to divide the bill.

It happens. People get ill, have accidents, or in my host's case, fall over spectacularly at 6 a.m. and require stitches in their face. (He's fine. Mostly.) Don't lug a hospital's worth of drugs around with you just in case, but remember to carry the prescriptions for any meds you're taking, in their original packaging if possible, and look up the specific rules if you're going abroad. (Japan, for instance, requires diabetics to get prior permission from the Japanese Embassy before they can bring in insulin.)

Insurance is your friend in case of accidents — the American Government provides a list of main insurance agencies that provide medical insurance abroad. Keep all your receipts for a claim later. Also know your emergency numbers: 911 isn't the universal number around the world. (In the U.K. it's 999, in Australia it's 000, and across the EU it's 112, for example.)

And of course, before you go, get all your vaccinations. I don't care if you hate needles, it's better than TB. Don't drink water from the tap in countries with a low degree of sanitation, and carry proper insect repellent.

Maybe your phone isn't working all the sudden because it wanted a vacation too. If anything essential is battery-powered, pack replacement batteries, and don't wait till you get to your destination to buy a plug converter (they'll be more expensive at airports).

If there's a serious phone breakdown, burner phones are your friend: a cheap phone and SIM card should be relatively inexpensive, (and then you can pretend you're Carrie from Homeland). Buy international calling cards after carefully comparing them for the best deal. Travelling with a laptop is generally a bad idea — it's heavy, delicate and exposes you to theft — but if you must, buy a laptop lock and back up everything before you leave.

Anything is fair game — my favorite cashmere jumper was stolen in an airport once. So take precautions before you leave: If you're staying in a hostel, pack a padlock. Leave your passport cover at home. Customs officials hate them, and their bright colors only advertise your passport's existence.

Don't carry your money and passport with you everywhere if you can help it — if there's a safe in your hotel, use it — and notify your bank before going overseas. Put valuables in interior pockets inside bags so they're harder to extract, and try to carry things across the front of your body. If you're in a very robbery-prone place, consider buying a glam passport holster that sits under your clothes. Sexy.

If the worst happens — your passport is taken or lost — tell the police immediately, and go to the closest U.S. consulate/embassy. To replace your passport, the embassy will need ID and proof of U.S. citizenship (though they'll help you even if you don't have them), and unless you've been a victim of a crime, they'll charge to replace it.

Robbed? Report it to the police and get a copy of the police report for insurance claims and dealing with your bank later. It's easy to replace traveller's cheques, but the lost/stolen report phone number for your bank card is normally on the card itself, so copy it down somewhere else. Don't use suspect ATMs, and keep all receipts from your transactions so you can trace your spending.

I know it doesn't sound carefree or leisurely, but I promise: It is possible to be prepared and also relax so much you can't move.

More like this
Craving The Beach? Here's Your Guide To A Solo Vacation In Turks & Caicos
By Alexis Morillo
You Can Stay At The 'Hocus Pocus' House On Airbnb
By Alexis Morillo
10 Stranger Things-Inspired Halloween Costumes For True Fans
By Emma Carey
6 'Game Of Thrones' Halloween Costumes That Aren't Overdone
By Nina Kahn
Get Even More From Bustle — Sign Up For The Newsletter