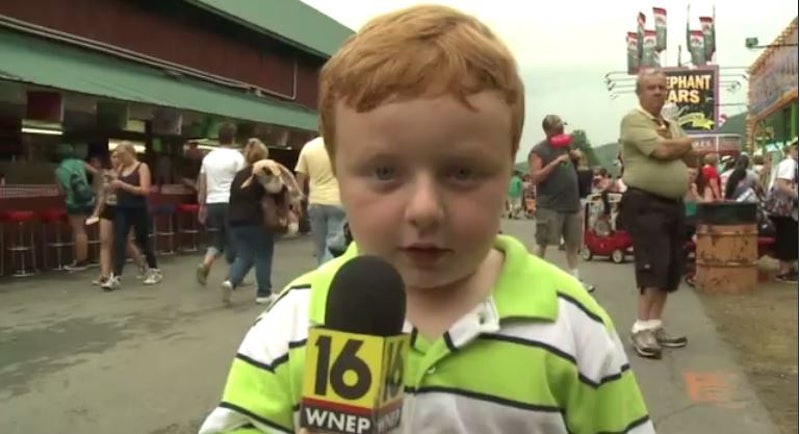 When 5-year-old Noah Ritter took a trip to the Wayne County Fair in Honesdale, Pennsylvania, on Friday, Aug. 1, he had no idea the experience would make him a viral star — but that’s exactly what happened, thanks to a hilarious interview the kid gave to a local news station covering the event. One thing’s for sure: The word “apparently” will never be the same again.

Newswatch 16 reporter Sofia Ojeda stopped to chat with Noah on camera at the fair, and, well ... let's just say he's definitely got a career in television presentation when he grows up if he wants it. Ojeda asked the boy about the ride he had just ridden on, which prompted him to go ahead and grab ahold of the microphone and go to town. “It was great and apparently I’ve never been on live television but apparently sometimes I don’t watch the news because I’m a kid and apparently every time Grandpa just gives me the remote I have to watch the Powerball,” he said. He may not be using “apparently” — which he drops eight times in less than two minutes — quite correctly, but hey, he’s only 5 years old. When I was his age, my favorite phrase was “as far as I’m concerned,” and I’m pretty sure I didn’t use it the way it’s supposed to be used then, either.

Noah’s grandfather, Jack Borowski, told ABC News that his grandson was spending the summer with him in Wilkes Barre. “Noah is pretty talkative. He has a large vocabulary,” he said about the precocious youngster, noting that the boy seems to be enjoying his newfound fame. But apparently (ha ha) Noah doesn’t want to be a reporter when he grows up; he’d like to be a paleontologist. “We go down to the history museum in Philadelphia about once a month because he loves the dinosaurs,” said Borowski.

Well, whatever Noah decides to go into, he’s got a bright and shining future ahead of him!