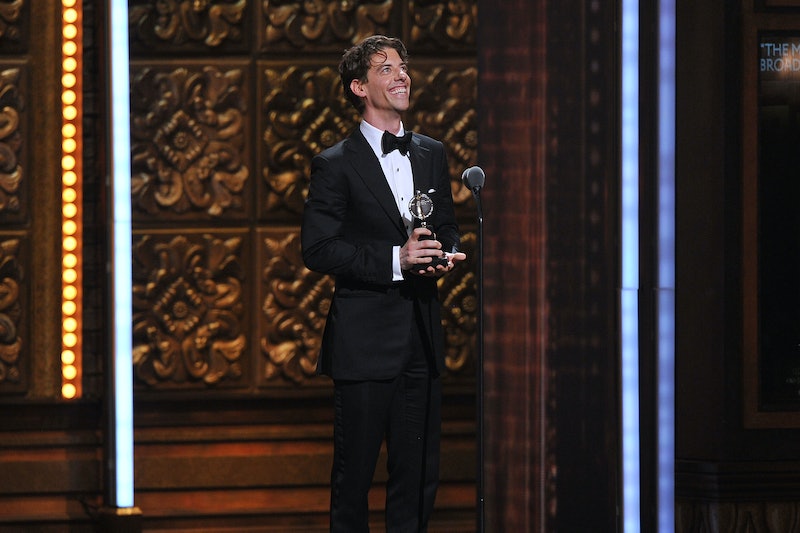 I'm sure we're all excited for Allison Williams and Christopher Walken in tonight's live broadcast of Peter Pan, but I'm also impatient to see Christian Borle as Peter Pan Live's Smee & Darling. (You could also call him Broadway's Christian Borle, if you prefer.)

The character actor is a familiar face on both stage and screen, having been on Broadway for over a decade. Plus, this is not his first NBC live televised musical (he was part of last year's Sound of Music Live!). This isn't even his first time in Neverland. Borle played pirate "Black Stache" in Peter and the Starcatcher both on and off-Broadway and won a Tony for the role. His other roles include Bert in Mary Poppins, a guest appearance on Showtime's Masters of Sex, a non-singing stage turn as Prior Walter in Angels in America opposite Zachary Quinto, and a villain in Disney's animated series Sofia The First .

I'm gonna get real personal for a moment. I first saw Christian Borle starring in Thoroughly Modern Millie as a replacement opposite Bunheads' Sutton Foster. It was one of my first Broadway shows and I still have the keychain I bought as a souvenir on my keys to this day. Not only that, but Borle's character Jimmy sings two of my favorite showtunes of all time, including "What Do I Need With Love" which you can listen to here. (Please do and relive that experience with me.) It which features the delightful lyric "Peter Rabbit's missin' footsie — means I roll without a tootsie." Does wordplay get much better than that?

It is important to note that this is not the standard Peter Pan double casting. Traditionally, the actor who plays Mr. Darling also plays Captain Hook and it's all delightfully Freudian. However, since this means double the Borle, I am not complaining. Here are some other examples of versatile talent.

Let me start off by blowing your mind. Remember this commercial from over ten years ago? Not only is that on eBay, that's Christian Borle!

Borle played Emmett (the Luke Wilson role) in Broadway's musical adaptation of Legally Blonde. The show was broadcast on MTV in 2007. It was not live, however, stage shows like this that were recorded and televised to great success paved the way for the revival of this old format. Borle also played Pirelli (the Sacha Baron Cohen role) in the televised Lincoln Center concert of Sweeney Todd that starred Emma Thompson.

I could talk about Smash all day. The NBC drama series could be a mess at times, but it was my kind of mess, you know? Borle played fictional composer and Marilyn Monroe enthusiast Tom Levitt. He got excited about baseball numbers, he championed Megan Hilty's character who was obviously the only choice for Marilyn no matter what Commodore Norrington from Pirates of the Carribean tried to tell me, and he worked alongside Debra Messing and her scarves. Plus, he jumped into rehearsals and sang the above number.

Can you blame NBC for not wanting to get rid of this talent?

Here is Christian Borle singing a Sondheim duet in a benefit concert with Jonathan Groff, who you already know from Looking, Glee, Spring Awakening and of course Frozen. Maybe the two of them can reunite in the upcoming Disney short — let Jonathan Groff sing, Disney!

Most of Christian Borle's roles and songs are silly and comedic. I'd like to end on a more serious note. This is a song written by William Finn, who is best known for The 25th Annual Putnam County Spelling Bee. He wrote this show Elegies as a reaction to the September 11 attacks. It goes to show you that even character actors are still actors that can move you.