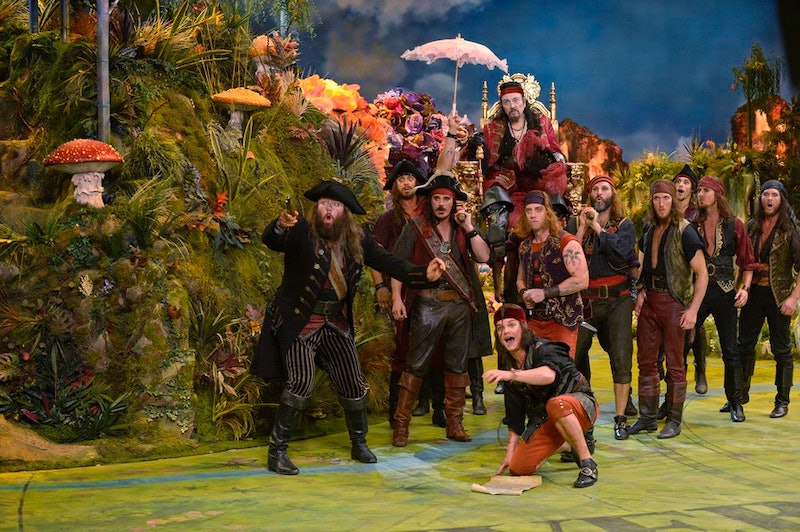 Did you enjoy Peter Pan Live tonight? Were you able to stay awake longer than Christopher Walken? Were you surprised to see Minnie Driver as Wendy at the end? Were you concerned for the safety of Liza, the Darling family maid? The NBC special had to balance live performances, music cues, flight, camera, and a computer-generated Tinker Bell. What were Peter Pan Live 's best and worst moments? I'm not ashamed to admit that I mocked Sound of Music Live last year. Luckily, it's a lot more difficult to be cynical about Neverland than nuns and Nazis. Look, I'm not surprised that live musicals are successful. We live in a society that wants things now, wants them to be perfect, and doesn't want to pay for them. I think NBC has latched onto something really valuable. It may seem like a collective nostalgia, but I think they're showing an understanding of modern audiences. Social media — Twitter in particular — has created a sense of community and shared experience which lends itself really well to live television. The musical craze has already spread to Fox, who will stage Grease Live next year. NBC is doubling down next year with both The Music Man Live and possibly Aaron Sorkin's courtroom drama A Few Good Men .

However, that doesn't mean that we can't have some fun. Hopefully you tuned in tonight, and if you didn't — here's what you missed. The best and the worst of NBC's Peter Pan Live.

Smee had bare, tattooed biker arms — because why not? Those biceps even have their own Twitter account. (I promise it wasn't me.)

I'm 60 percent certain that the sleepy drunk act was just that, an act. Maybe I'm as naïve as Wendy Moira Angela Darling. But whether he was saying "this seat is hot," fist-bumping, or telling a crocodile not to rush him, I chuckled. His new song, "Vengeance," was also a peppy, fun introduction.

The Darling House, Neverland Woods, the Lost Boys Lair and the Pirate Ship were all delightfully intricate. It's a shame they're all going to be torn down tomorrow, if not later tonight.

Mrs. Darling sang a surprise duet with Wendy. Help us, Broadway stars! You're our only hope!

In the middle of commercials. Just so that we all knew Walken was still holding that note. I think what they were trying to go for that SNL in-between commercials thing?

New favorite character, along with the green cake that arrived via slide, and nobody questioned it?

That dog has skills! Bodie the Dog stole Peter Pan Live as we predicted.

As Mr. Darling, that caterpillar was too much.

The Flight Through London

What should be one of the most magical moments made us seasick with cameras all over the place and Peter and the Darlings just kind of bouncing around. I will say one thing — you can always see the wires. Any money they could have spent painting them out went to Tinker Bell's special effects.

The cameras in general were disorienting. Did they need to be so mobile? Did we need Croc Vision?

I'd rather watch a five-pronged lightsaber.

I can't put my finger on what felt so slow about the show. I remember having the same feeling about The Sound of Music Live! last year. What isn't working? Is it the lack of an audience to energize and provide feedback to the performers?

Sure, Peter Pan is played by a woman, so there's a double message in there somewhere and a think piece that's probably already been written — but didn't you still cringe when the overbearing 1950-esque elements invaded?

Okay, I know I just said that live-tweeting was essential and I am all for transmedia storytelling. That's what is going to get adults to turn in. However, this campaign was too much. Let the children clap. Don't give them your phones and tablets. Do as we say, not as we do. Crap. I'm a grown-up.

"I've been waiting for you." I guess I'm not surprised that Wendy didn't teach her daughter subtlety, but still.

More like this
The Spice Girls Just Dropped A Brand New Music Video
By Sam Ramsden
The Best 'Grey's Anatomy' Intern Moments, From MAGIC to Glasses
By Grace Wehniainen
24 Years Ago, 'Friends' Dropped Its Most Underrated Ross & Rachel Episode
By Grace Wehniainen
Netflix Reveals First Look At Wednesday In The 'Addams Family' Spinoff Series
By Bustle Editors
Get Even More From Bustle — Sign Up For The Newsletter