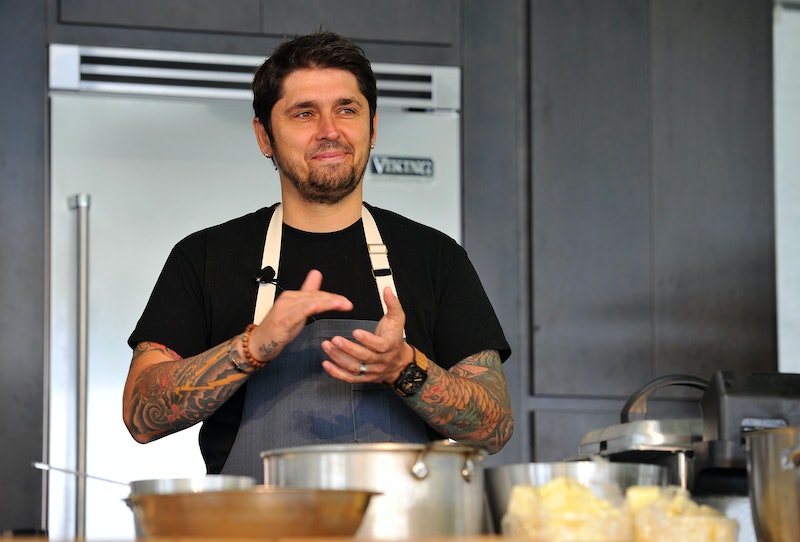 On Thursday, Dec. 4, four of the most notable masters of the food world will judge 16 culinary contestants in the third season of the exhilarating cooking competition 'The Taste.' World renowned chefs Anthony Bourdain, Nigella Lawson, Marcus Samuelsson, and Ludo Lefebvre will return as judges, with the power to send the hopeful competitors home with a simple spoonful of their creations. If you're a food-lover, you may recognize these judges by their impressive resumes — but Ludo's appearances on Bravo’s Top Chef Masters and Food Network’s Iron Chef America might make him the most recognizable. Of course, culinary-competition fans should recognize Ludo for his accomplishments first and foremost, but if not for his name then you'll at least remember Ludo for his 25 tattoos and counting, which he spoke about to Inked.

One of the world's greatest chefs, known for his successful restaurants as well as his TV personality, the French 43-year-old earned his fame strictly through talent. But I can't deny that I'm intrigued by the tattoos often seen coming out of his shirt sleeves. Fans can't help but wonder how many he has and whether they mean anything. Well, with more than 25 tattoos, food is surprisingly the only thing Ludo doesn't seem to have inked on him. Instead, his skin tells stories about his life outside the kitchen. However since he told Inked that he had over 25 tattoos back in 2011, the number could easily have grown since then. But from his impressive collection, here are some of Ludo's favorites — just to name a few.

HIS WIFE KRISSY’S NAME ON HIS CHEST

Ludo met his wife Krissy in the exclusive L.A. restaurant called L’Orangerie, where he was the executive chef, as he told GQ. The lucky lady is now his wife, partner, brand manager, and the mother of his two beautiful kids. The tattoo he has honoring her is a heart around her name with a crucifix, which he told Inked is his most treasured design.

Ludo and Krissy had twins after their marriage named Luca and Rêve, which is French for "dream." This tattoo is extra cool because of the French meaning the names hold. Dream on, Ludo!

HIS SISTER CHLOE’S NAME ON HIS WRIST

Together with Ray Walker, a Californian living and making wine in Ludo’s home town of Burgund, France, Ludo created a vintage wine called Maison Ludo in Ludo’s Grandmother’s cellar. The wine is said to be born from friendship and family — so between that and all the sentimental tattoos he named for Inked, you know Ludo is a family man.

Ludo and Krissy got their first matching tattoos after only three weeks of dating, according to his interview with Celebrity Living. They first got each other's initials, which was pretty risky considering it was only three weeks in. But in the long run, they knew they were meant to be and now share a tattoo of their wedding date.

Ludo originally made a name for himself as the executive chef at two of the L.A.’s most famous and luxurious restaurants, L'Orangerie and Bastide, and quickly established a reputation through his innovative and exotic cuisine. But his own name didn't appear on a restaurant until LudoBites — his wildly popular L.A.-based, guerrilla-style pop-up restaurant. It isn't surprising that he told Inked that the logo is one of his most treasured tattoos.

THE TURTLE ON HIS LEG

The fairly noticeable turtle on Ludo's leg seems a bit random, but in fact it signifies his first scuba-diving experience in Hawaii. Ludo told Celebrity Living that he was able to swim with and touch sea turtles during his trip, which was an experience obviously worthy of some brand new ink.

LOS ANGELES' INITIALS ON HIS CHEST

This one was Tweeted a while back and was actually a bit surprising. It was rumored that Ludo had planned to paint a landscape of L.A. across his back (complete with Hollywood sign). He told Inked he might even add the Virgin Mary into its midst, but as far as I know, the initials are the extent of the Los Angeles tattoo so far.

4 DRAGON TATTOOS AROUND HIS FRAME

At some point, according to the Inked interview, the four dragons strewn around Ludo's frame served a purpose, but apparently they're some of the very few tattoos that he can't remember the reason for.

It's unclear from the Inked interview exactly which prayer Ludo has inked into his skin, but I respect the meaningful tattoo.