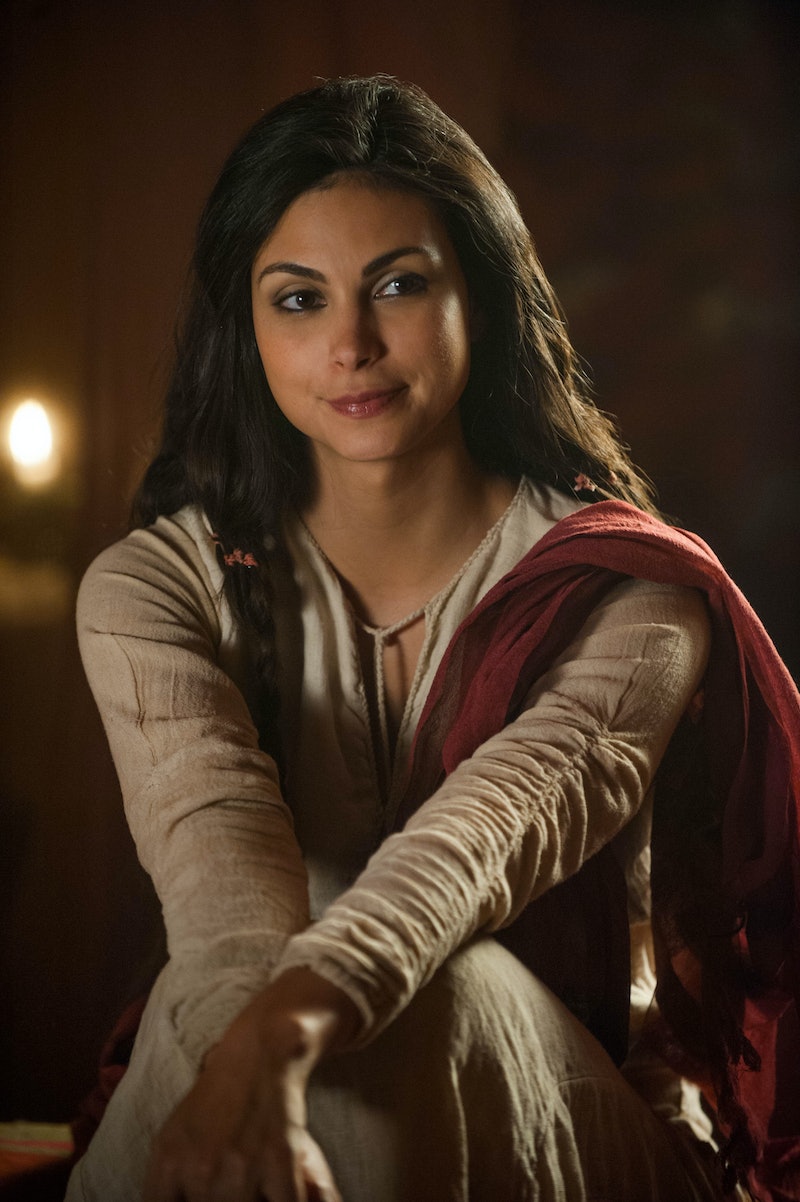 On Sunday, Lifetime will premiere a miniseries that stands out from most of its movies because of its source material. The Red Tent stars Morena Baccarin as Rachel in the miniseries, based on the best-selling novel by Anita Diamant. The novel expands the Biblical story of Rachel, Leah, and Jacob by focusing on Leah and Jacob's daughter, Dinah. No, not the Dinah who's blowing a horn in the kitchen while you've been working on the railroad. This ancient character is also the sister of Joseph. You know, the guy who interprets dreams and has an Amazing Technicolor Dreamcoat? But how do you know the actress playing Dinah's aunt? She used to be a cult star, but is thankfully a familiar face now.

Baccarin has done almost every genre in the book. She has a permanent invitation to Comic-Con. She's been in critically acclaimed Showtime dramas. We're excited to see her play Spy with Allison Janney and Melissa McCarthy. However, Baccarin hasn't done many period pieces.

She also has many television credits, but Baccarin's about to return to the small screen in another big way next year. When the Fox drama Gotham returns from hiatus, Morena Baccarin will play Dr. Leslie Thompkins, This is the actress' second DC Comics television project this year. She also provides the voice of "Gideon," Harrison Wells' super computer on The Flash. Here are some other places where you've seen the actress before.

If you haven't seen Firefly, look, I know admitting this sometimes gets you outraged looks and a lot of words like "gorram" that don't make a lick of sense of context. I'm going to explain it as plainly as possible: Firefly is not without problems, but it is the best portrayal of formed family on television. Baccarin played Inara Serra, who is something like an escort in the world of the show.

Baccarin shed her locks to play the leader of the alien invaders. She also had a recurring role on the long-running science fiction series Stargate SG-1.

If you're not a fan of science fiction, fantasy or superheroes, you may know Morena Baccarin as Jessica Brody on Homeland. She was supposed to be a foil to Carrie Mathison, Jazz Detective. She played Damien Lewis' wife, and mother to one of the most polarizing teenagers on television. In 2013, Baccarin was nominated for a Primetime Emmy for the role, as well as a Screen Actor's Guild Award, along with the rest of the Homeland cast.

How I Met Your Mother

Baccarin has had many guest roles on different sitcoms and drama series over the years. Her many credits include The Mentalist, The Good Wife, The OC, and It's Always Sunny In Philadelphia. However, this one sticks out to me. She played "Crazy Eyed Chloe" in the classic "Swarley" episode of HIMYM.

More like this
Rosa Salazar Leads A New Morbid Wedding Dramedy From Disney+
By Darshita Goyal
Harry Potter's Viktor Krum Has Undergone A Huge Transformation Since Hogwarts
By Sam Ramsden and Meguire Hennes
Nicola Coughlan Shared A Lady Whistledown Excerpt From ‘Bridgerton’ Season 3
By Grace Wehniainen, Alyssa Lapid and Sam Ramsden
A New 'And Just Like That' Table Read Pic Confirms A Key Character's Return
By Jack Irvin and Grace Wehniainen
Get Even More From Bustle — Sign Up For The Newsletter