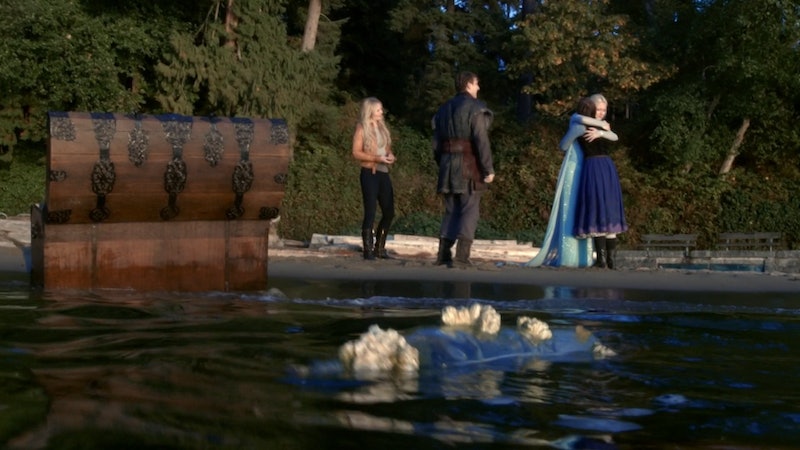 Once Upon A Time might be preparing to change the Frozen canon once again, and no — I'm not talking about Olaf. After last week's episode "Fall," I feel fairly confident that Elsa and Anna's parents are alive on OUAT . There was a reason that the message in a bottle came over with Anna and Kristoff and that Blackbeard threw them overboard in the exact same spot that their parents disappeared. This is not the last we've seen from Gerda. I have a feeling that Ingrid and her sister will be reunited as the Frozen arc wraps up and we send everyone back to Arendelle for a Royal Wedding. Who will actually be ruling the Northern kingdom, between Hans' family and the many generations now milling about? That's a debate for another time. For now, let's look at the evidence why I think they aren't so dead after all. I think the parents, or the answer, lies in the bottle that washed up on the Storybrooke shore.

In the season premiere, many blizzards ago, Queen Gerda and her King put the key to saving Anna and Elsa in that bottle and threw it overboard in hopes that their daughters would be able to find it. Remember, this happened during the part of the story that takes place in the movie Frozen, not the show. This is when the girls are teenagers, and Anna has just stopped trying to get Elsa to build a snowman with her.

On Once Upon a Time, Anna got some insight but we never found out everything that the parents discovered on their journey. We know they went to Rumplestiltskin, or at least that's what we believe. We know they were thinking of taking away what made their daughter special. On the sinking ship, Gerda searched for a very specific pen in which to write her instructions. Magic, perhaps? She said "they have to know" and that the truth was the only way to save them. Was she simply referring to her sister Ingrid, and the memories she had the trolls erase from everyone in Arendelle? Surely the message in the bottle isn't just the backstory we already know. There has to be at least one other secret in the bottle.

Putting faith in something so small and made of glass turned out to be a pretty bad choice, considering that the bottle sank straight down with them and their ship. Luckily, it worked out! Elsa wished Kristoff and Anna back to her (for some reason I still don't quite understand), and the barnacled bottle arrived with them.

There's the bottle, over 40 years later, at the bottom of the sea. I think the Royals got trapped in the bottle somehow. The ocean is a magical place. There could be a type of portal down there. Plus, we're all about getting trapped inside of things on this season of Once Upon A Time. Elsa and Ingrid were trapped in the urn. The Sorcerer and the Blue Fairy are trapped in Mickey Mouse's hat. If Elsa and Anna's parents aren't actually inside the bottle, whatever is written on that scroll must hold the key. Maybe they're just selfish, and a magical way to revive them is what they think is Arendelle's "best chance."

Honestly, I still feel really bad about how Gerda banished her sister Ingrid to the urn. I understand that she was scared and acted rash. She deserves to be redeemed, and the only way to do that is to face the Snow Queen and show her the understanding she so longs for. Why try and make a fake sister out of Emma when you can have your real sister back? It's the only thing that makes sense to me at this point.