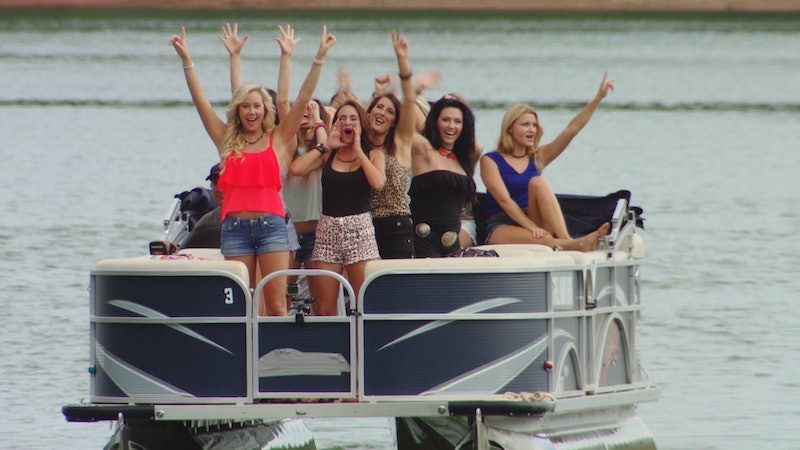 CMT's hit series Redneck Island is coming back for a fourth season on Thursday, Dec. 4. Just in case you are not familiar with the show, it is a reality competition where contestants battle it out to prove that they have "physical and mental toughness." Aside from the actual competition, there is a lot of drama, hook ups, and outdoor partying in a sunny location. But where is Redneck Island? Is it an actual place that we can all visit for a party? Well, if it wasn't clear from its politically incorrect name, it is not a real location, so where do all these shenanigans go down?

This season, the show takes its American roots very seriously filming in what CMT describes as "a picturesque lake house in Georgia." That sound about right. Now I wonder if this house will end up gaining notoriety like the reality TV show houses of the past such as those on Jersey Shore and Real World.

But Redneck Island taking place in the U.S. was not always the case. I don't know about you, but I find it odd that a show about American rednecks did not always film in America. In Seasons 1 through 3, the location seemed pretty mysterious and is only described on CMT's website as "a tropical island," the location of which was not specified so I had to do a little research.

It's actually a bit tougher to decipher the location of former Redneck Islands than a quick Google search. On the IMDb page for the show, the location is listed as "San Francisco, Nayarit, Mexico." Wait, what does that mean? Are those three separate locations or what? Isn't San Francisco in California? Thank you, IMDb, for providing more questions than answers on this one. Of course, there can be more than one city called San Francisco...

In fact, Nayarit is a state in Mexico. San Francisco is a city in the state of Nayarit. To make things a little more confusing, the Mexican San Francisco is also referred to as San Pacho. Specifically, the show, at least at one point, taped at the Riviera Nayarit, a beach destination in Mexico.

But for this season, things are much simpler. The cast is somewhere in Georgia, living it up, and vying for that big cash prize.