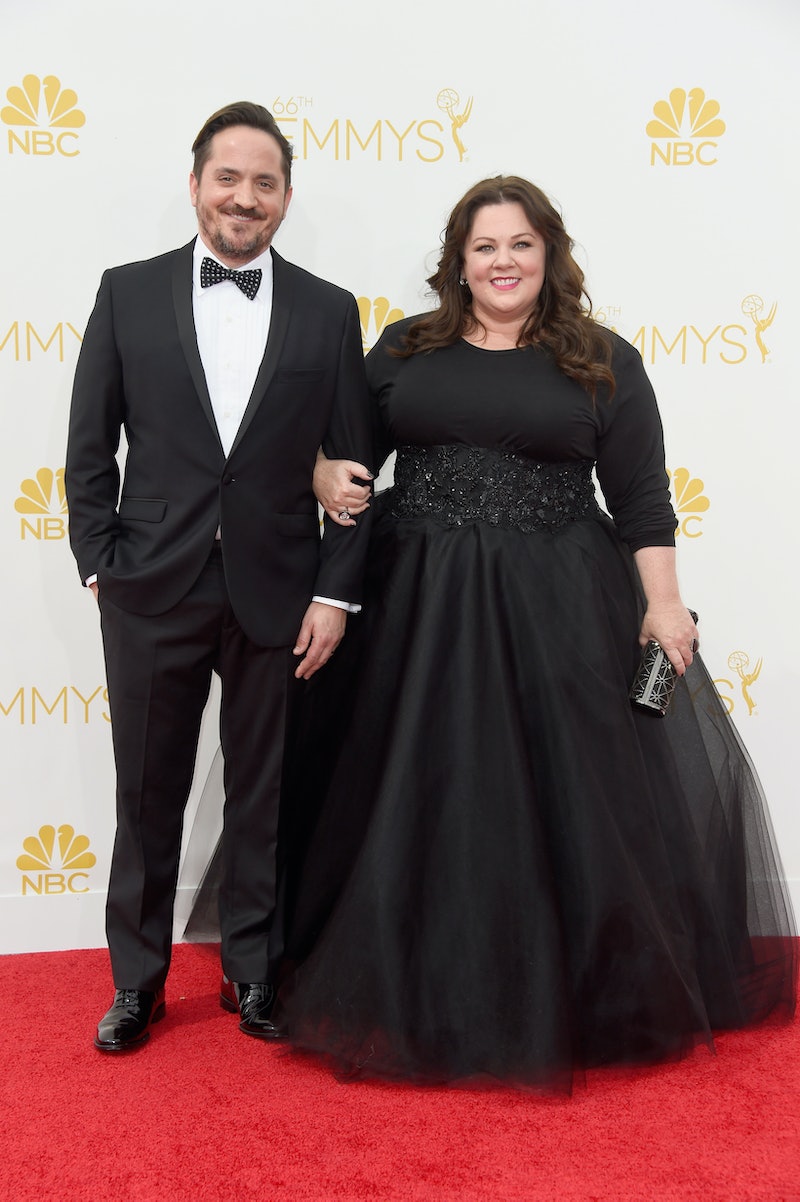 When Mike and Molly returns for its Season 5 premiere on Dec. 8, Molly's going to return home from a writer's workshop with the good news that she's about to be a published author. And one person who couldn't be happier about her professional advancement (and, um, big book advance) is her husband, Mike. Some of this might also ring true for star Melissa McCarthy in real life. The actress is also a screenwriter, and she also has a a supportive husband; the two have even collaborated on projects together. So, who is Melissa McCarthy's husband, and what have they worked on as a couple?

McCarthy's husband is Ben Falcone, a fellow actor, comedian, screenwriter, and producer. According to Us Weekly, McCarthy and Falcone knew each other in college, and then reconnected at the Groundlings in Los Angeles. Falcone told the magazine that McCarthy had a goth thing going on in college. "She had blue hair and she was really scary...in a good way!" he said. "Scary and pretty! I was light-alt...The girls that I knew were also light-alt, and they would look at Melissa — we didn't know it was Melissa — but they would go, 'Man, I wish my mom would let me dress like that.'"

Besides the light-alt and goth haunts of their college, here's where you might have seen Falcone (or his work) before.

He Was the Air Marshal in Bridesmaids

The role of Megan in Bridesmaids was a huge, breakout performance for McCarthy, and her husband was right there with her (and totally exposed). The Huffington Post writes that Falcone might not have realized all that was required for his Bridesmaids role, especially when it came to a certain sex scene: "Falcone said that his wife called him on his day off to shoot the scene — but he had no idea what it would entail. 'The next thing I know, I have turkey meat on my nipples,' he said."

He Co-Wrote and Directed Tammy

Falcone wrote Tammy with McCarthy in mind — and the idea had a very strange origin. "I literally had a dream about it," Falcone told ComingSoon.net. "I came downstairs and I told Melissa that I wanted to write a movie where she goes on a road trip with her grandma. She said, 'Oh, that sounds cool!' I went, 'Yeah! And you grandma has a drinking problem and she sleeps around a lot!' She goes, 'Great! Okay!' That’s what I love about Melissa. She never bats an eye." He also gets to fire her in the beginning of the movie, which must've been fun.

There's More in the Pipeline

Tammy might not have lit the world on fire, but that isn't stopping McCarthy and Falcone from doing another movie together: They're currently working on Michelle Darnell . According to Splitsider, McCarthy says the movie is about ""a self-help inspiration speaker (a la Suze Orman or Oprah) who goes to jail for insider trading, and struggles to reinvent herself as America’s new sweetheart when she’s released." Sound better than a fired fast-food employee on a road trip with her grandma? Look for it in 2016.