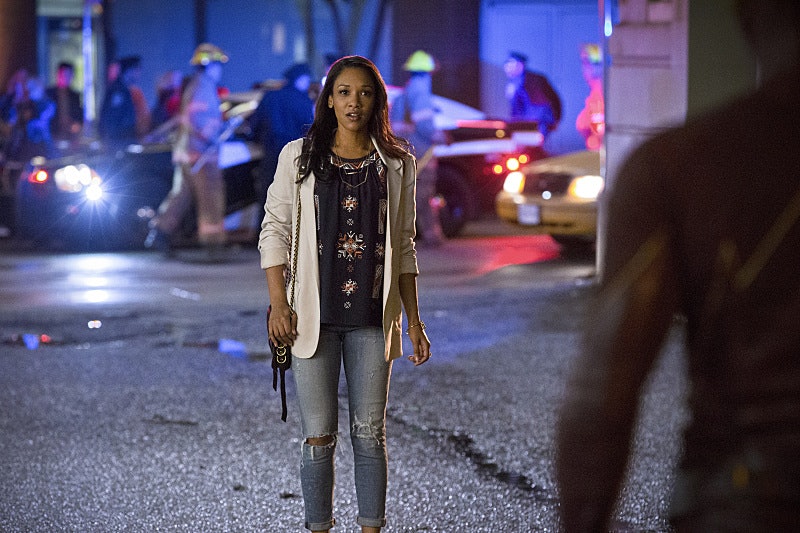 Overall, I'm really loving the funny, charming CW series The Flash. There's only one thing I really don't like — Barry keeps his identity secret from Iris to "protect" her. Not again! I feel like this is the oldest superhero move in the book. Shield the ladies. Romanticize keeping secrets.

Let me tell you a thing: Nobody wants to be kept out of the loop, especially when it's a really cool loop! Is Barry ever going to tell Iris that he's The Flash, or is she going to find out his secret identity some other way? Why is it a secret? Because Iris' father, Joe West, made Barry promise. However, I feel like it has to happen sooner rather than later. They've already had several conversations. Iris is starting to fall for the masked vigilante. That's another thing I don't love about the message this show is sending — that Iris only is attracted to Barry when he's mysterious and masked. How awkward is that?

Iris, or at least the way she's written, is almost too oblivious at times. Is she too close to the situation with Barry to release that he has feelings for her and openingly drooling at his friend's arms is maybe not the most tactful thing to do? I hope this doesn't apply to the identity of her best friend. She's going to either figure it out or someone else will tell her.

Maybe Eddie will be the one who reveals it to her. Eddie Thawne's concerns about Central City's hero have to be leading somewhere. It's possible that he knows more than he's letting on and is biding his time. Plus, we already know he's jealous.

In the comics, Iris does not learn Barry's secret identity until they're in bed together and she hears him talking in his sleep. Well, I never! I'm sure shippers would like to see that scene play out on the CW show. In the comics, of course, they are on their honeymoon. It's all very chaste and not scandalous. And while talking in his sleep would make for a funny scene on the show, at this point, I feel like it would be a sleeping Flash revealing that he's Barry Allen than the other way around. I would rather if Barry told Iris himself, you know, while conscious.

Iris already knows everyone at S.T.A.R. Labs. She has skills in combat and journalistic ambitions. I hate that Barry is guarding her when she could be helpful to the team! She has more allies than enemies and can protect herself! Granted, Barry did do this at the request of Iris' father, Detective Joe West. He's keeping a promise and I respect that. (I still don't like the trope, but I can understand parental concern; Joe doesn't want his daughter to get caught up in metahuman crime.)

However, as fate would have it, she's already entangled with The Flash and metahuman crime, and it would honestly be safer at this point if she knew she was having secret meetings with her best friend. Whatever happens, I don't see this ending well.