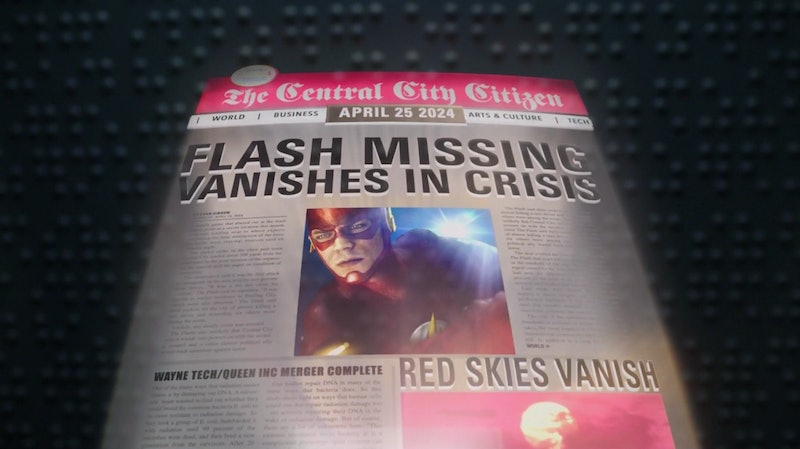 There have been plenty of twists and turns on the first season of The Flash. But I think we're ignoring one of the pilot's original mysteries. Why did The Flash vanish in 2024? Harrison Wells had Gideon pull up his Daily Prophet at the end of the pilot episode. Clearly, the most shocking piece of info was the date, April 25, 2024. It essentially confirmed that time travel is going to play into the CW series. However, what about the actual content of the publication? Where did Barry Allen go and why is it so important? Was he kidnapped? Was he killed? When Barry was growing up in the West household, we learned that he ran away quite frequently. Is this what happens in 10 years? Does he just give up on being a vigilante and make a run for it after this "crisis" occurs?

My theory is that Barry, having learned how to run so fast he can travel through time (or gotten some help from the lab), has decided to try and stop his mother's death from happening in the first place. In the flashbacks we've seen, there is a red streak, as well as the yellow streak that Barry Allen remembers from childhood. Either that's just Reverse-Flash's red eyes, or Barry is there as well. I think Harrison Wells is monitoring Barry's past to make sure that future Barry hasn't messed with the space-time continuum. Maybe he's trying to make sure the crisis never happens, and he's checking the paper to see if it's changed, like Marty McFly's family photo.

Harrison has disclosed that he moved to Central City after his wife, Tess Morgan, died in a car accident. This is all too mundane for someone with such a big personality and a laboratory full of secrets. He has to be leaving something out, if not outright lying. Whether he's from the future, or just has the technology to see what's coming, his arrival in Central City must have more to do with the Flash's disappearance than he's letting on. For obvious reasons, because it hasn't happened yet.

Of course, the second most important piece of information on that newspaper is the casual mention of Wayne Tech merging with Queen Consolidated. Are we going to meet Bruce Wayne on Arrow? How many Batmans do we need right now? This relates to the third most important thing, the reference to "red skies," which is most likely a nod to this being a crossover series with Arrow. There were a series of comics in 1986 that were connected, but only by characters wondering why the sky was red, nothing else. I wonder if that will start happening on The Flash and Arrow.

Hopefully, at least some of these answers will be revealed in the winter finale on Tuesday night. Time travel has been hinted at for too long and now The Flash needs to address it. Perhaps a flash-forward is coming (no pun intended).