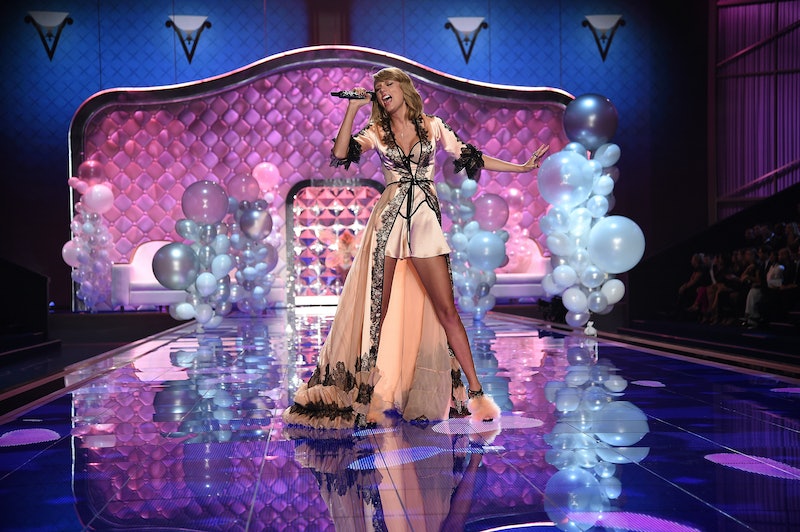 I would typically classify myself as a casual Taylor Swift fan (a rare and dying breed), but as cool as I want to play it, T-Swift has won me over one too many times for me to deny her amazing ability to write and perform a catchy song. And Swift's performance at the 2014 Victoria's Secret Fashion Show was no exception. So although I do not often pray at the altar of Swift, on the evening of Dec. 9, I did. Her talent and "Style" (pun intended) could not be denied.

Swift performed at last year's Victoria's Secret Fashion show and although she looked fantastic in her silver dress and shoes while singing "I Knew You Were Trouble," I was more excited for this year's performance. Since the show took place on Dec. 2, the preview photos showed that Swift decided to channel the Victoria's Secrets Angels in not one — but two — lingerie-inspired ensembles. She looked absolutely fabulous (even while not revealing her belly button). And she was even more stunning strutting her stuff on stage than the photos could capture. It was definitely a step up from her Union Jack outfit from the 2013 show.

As expected, she sang "Blank Space" and "Style" live. She performed "Blank Space" first to open up the "Dream Girls" segment and looked like she was genuinely having so much fun in her pink teddy and robe. She was definitely boudoir-ready.

She closed the show with "Style" and rocked a black, lacy outfit that showed off her awesome bod. She walked out with VS model friend Karlie Kloss and the rest of the angels complimented her in all black and white ensembles.

"Style" was more subdued than last year's "I Knew You Were Trouble," but Swift's clothing and song choices were more mature and sexier than in the 2013 fashion show. Although "Shake It Off" is old news by now, I would have liked to see her perform it just because it's a dream of mine to dance down a runway to it. But the angels already lip synced to it, so that will have to do. "Bad Blood" also would have been a treat, but it wasn't a T-Swift concert — it was the Victoria's Secret Fashion Show — so I need to get my priorities in check and not be too greedy.

What I find so refreshing about Swift's performances is how she makes these mystical models that make up the Victoria's Secret Angels relatable. Drinking wine on my couch in my sweatpants puts me almost as far away as possible from the Victoria's Secret runway in London, but seeing all of these women having a good rocking out (and with) T-Swift makes me realize that sometimes we are all just girls at heart who love a good song about a boy (or girl).

With such another sassy and sultry performance at the show, Victoria's Secret may as well invite Swift to do a three-peat and perform at the Victoria's Secret Fashion Show in 2015 — she's pretty much a model for them anyway now.

More like this
Christian Bale Sang With Taylor Swift & His Daughter Can't Believe It
By Radhika Menon
Did 'Grey’s Anatomy' Just Drop A Major Taylor Swift Easter Egg?
By Grace Wehniainen
Everything To Know About Taylor Swift’s 10th Studio Album, 'Midnights'
By Grace Wehniainen and Jake Viswanath
Bella Hadid Will Think Of Her Spray-On Dress From Paris Fashion Week “Forever”
By Brad Witter
Get Even More From Bustle — Sign Up For The Newsletter