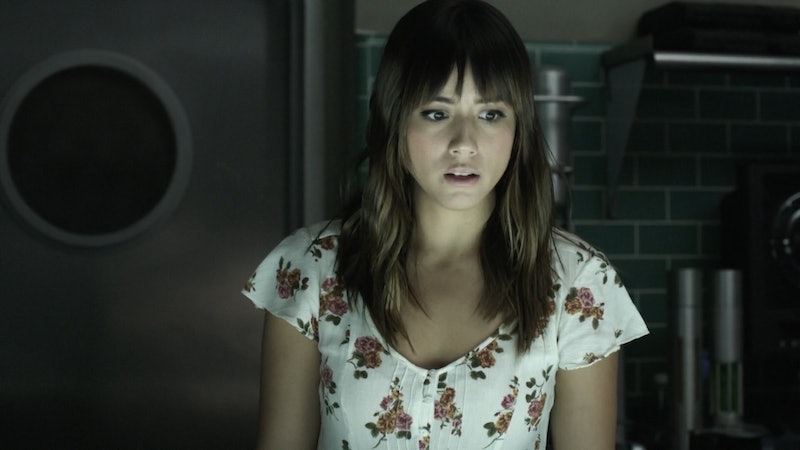 A major characters from Marvel comics just joined the MCU. Only, here's a twist, she's been here for quite some time. Finally, Agents of S.H.I.E.L.D. confirmed Skye is Daisy Johnson, also known as Quake. I was siting here on edge waiting for Cal, Skye's Father, to end a sentence with "Daisy" for the whole episode, and he finally did as a dramatic exit. He'd been humming "Daisy Bell" (Bicycle Built For Two) and making ominous statements for too long! At long last, Mary Sue Poots is no more. Welcome to the Marvel Cinematic Universe, Daisy Johnson!

Then, in a really cool sequence, Skye received superpowers in the "temple" that make her Quake. According to the comics, she should have seismic abilities and the ability to shield herself from psychics. She also once served as the Director of S.H.I.E.L.D. and also as an Avenger. This is probably the biggest part of the reveal. Skye could easily show up in the movies now and nobody could question the crossover. Daisy Johnson is close with Steve Rogers, which if I were Chloe Bennett, I would be asking a lot of questions about right now.

My question is, will she start going by Daisy now? Or will she insist on being called Skye? There's all sorts of identity stories to be told here now. I'm sure FitzSimmons will be excited to study her newly minted abilities. How will the others take to it?

Raina also received some abilities, or at least changes. She was hidden in shadows after transformation, but I did see some whiskers on her face like a female Beast. Does she have some sort of cool cat powers? I can't wait for Agents of S.H.I.E.L.D. to come back and explore this new side of our heroes. How are they going to deal with this? Until then, at least we have Agent Carter to look forward to!