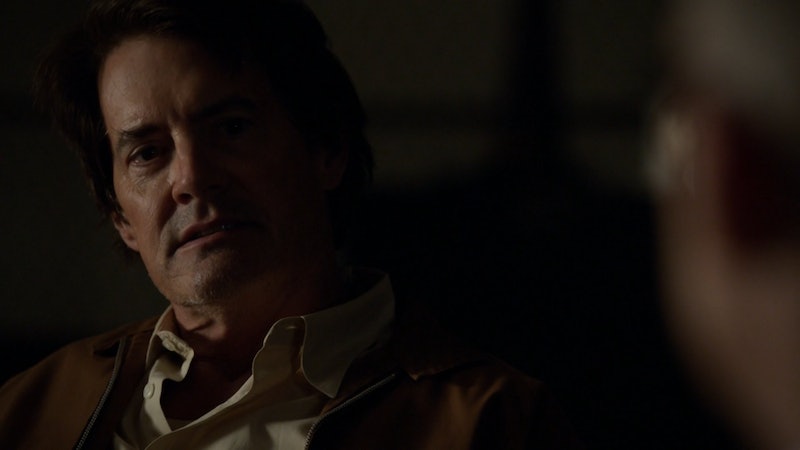 Finally, I can stop calling Kyle MacLachlan's S.H.I.E.L.D. character by nicknames. The winter finale of the ABC series revealed that Skye's dad is Calvin Zabo on Agents of S.H.I.E.L.D. All he had to do was casually introduce himself as "Cal" and we knew what we had been suspecting. This is Mister Hyde, the Marvel villain.

He set off to exact his revenge on Daniel Whitehall, who harvested his wife's organs to maintain his youthful complexion, but was intercepted by Director Coulson. It was a Dad Off! Coulson shot first! Yes, Whitehall was killed by Coulson before Calvon Zabo could go all Mister Hyde on him. He started attacking Coulson, and was only stopped when Skye called him "Dad." How sweet.

However, we still don't quite know how Zabo got to be the way that he is, or if he has superhuman powers. In the comics, he created the Hyde formula himself, and it all went wrong. On the show, he just vaguely alluded to not having been this way all of the time. He could just be a Doctor named Cal as a nod to Daisy Johnson's parentage. However, his insistence that his daughter shouldn't see him "like that" when he went off to kill Whitehall suggest that he was about to flip a switch and let loose something not quite human. In the comics, Zabo becomes a Hulk-like creature. On the show, Cal seems just sort of crazed and not well trained in anger management.

I'm sure we'll see Cal again. He predicted that once Skye gained superpowers, people wouldn't understand her and she's need his help. However, I have a feeling that Coulson's team won't be scared of her at all. Skye will most likely return to her father to try to understand him. Hopefully, he won't try to get revenge on S.H.I.E.L.D. again. This guy is the very definition of a loose cannon!