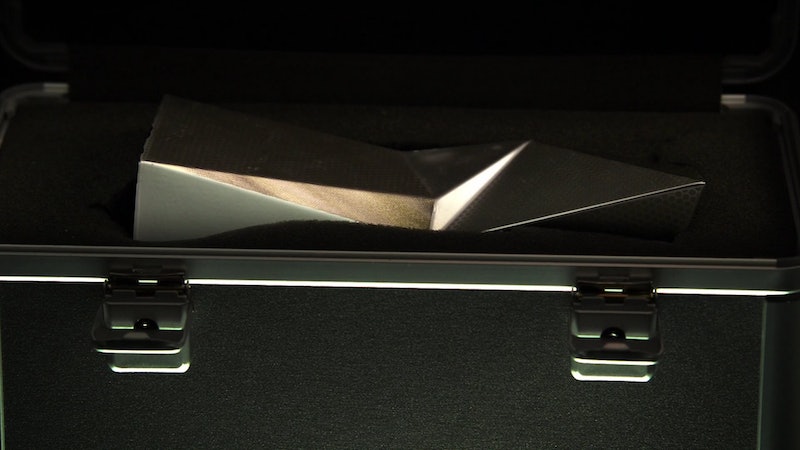 What the what? I suppose, now that we're in the throes of superpowers on this show, that a man with no eyes on Agents of S.H.I.E.L.D. would not surprise me. Yet there he was, answering the phone, and I gasped. Who is this dude? Is he an alien, or "special" like Skye, her mother, and Raina? He also had a diviner on his desk, which was lighting up. The activity seems to be related to Raina and Skye's transformation in the temple. He asked the person on the phone if they were seeing what he was seeing. The voice was, obviously they were both talking about the diviner's light show. How many obelisks are out there in the universe? No Eyes declared that it meant "there's something new" and instructed to person on the line to "tell the others" he was on it.

Also, who is he talking to on the phone? Was he some sort of higher up in the Inhuman world? Granted, Marvel has not officially confirmed that these are Inhumans that we're dealing with on Agents of S.H.I.E.L.D. but, come on. The evidence is overflowing. So what kind of hierarchy are we dealing with? Is there a whole Inhumans phone tree, or is it just these two?

I'm going to take a stab in the dark and predict (pun intended) that this guy has some sort of second sight powers. There are plenty of Marvel options here to speculate about. There's a robot who was struck blind and sent to record Earth's history. There is The Reader, a blind Inhuman. Could he be a Seeker sent to retrieve exiled Inhumans and return them to the family? Or perhaps could he be Videmus, a blind Inhuman with the ability to attach his eyes to others and read their memories? That would be fitting, because he reminded me of this little guy from Pan's Labyrinth. Happy speculating!

More like this
‘Squid Game’ Creator Hwang Dong-Hyuk Just Dropped A Major Season 2 Tease
By Brian Anthony Hernandez and Bustle Editors
Nicola Coughlan Shared A Lady Whistledown Excerpt From ‘Bridgerton’ Season 3
By Grace Wehniainen, Alyssa Lapid and Sam Ramsden
A New 'And Just Like That' Table Read Pic Confirms A Key Character's Return
By Jack Irvin and Grace Wehniainen
You’ll Definitely Recognise Both Of Ty Tennant’s Parents
By Maxine Harrison
Get Even More From Bustle — Sign Up For The Newsletter