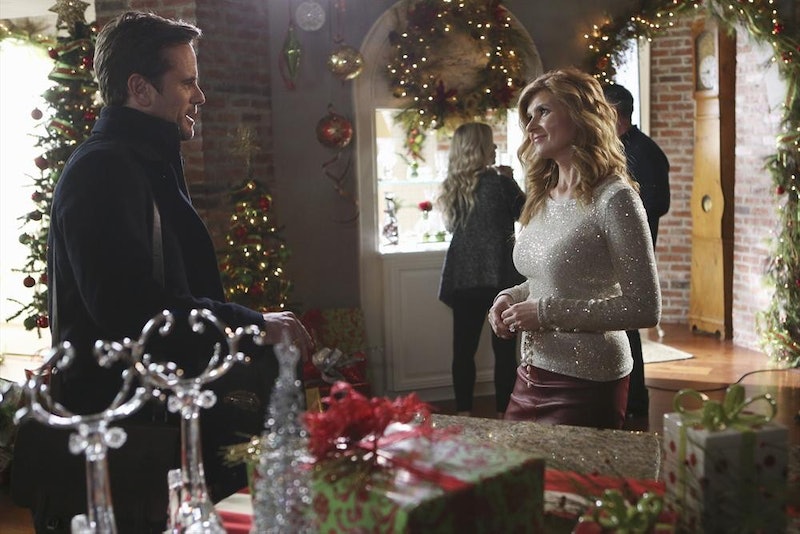 The promo for Wednesday night's winter finale of Nashville, " First To Have A Second Chance," promises to pull a lot of punches. Wedding bells are ringing, children are singing... and Deacon Claybourne collapses on the floor. How could Deacon relapsing affect Rayna and Luke now? Assuming that what we're seeing is a relapse. He could have just fallen down. But the broken glass on the magazine cover of Country's "Power Couple" tell a different story. He's already reeling from the Rolling Stone article. All of Deacon and Rayna's private history is now out there for the world to consume. As the wedding approaches, it looks like Deacon isn't dealing with his current situation as well as he had hoped.

The promo does begin with the words "a new story begins," which seems to promise that the wedding will happen after all. Maybe Rayna won't get the news until after the ceremony. Maybe the wedding will go on as planned, and this is just their first high stakes obstacle as a married couple. However this pans out, it does not bode well for Nashville's "ball and chain."

Scarlett is the one who finds him. Poor Scarlett. She just had Terry relapse in front of her. Now Deacon? Here's the preview for the winter finale.

It's definitely a complicated situation. Rayna and Luke, I just have to say it, are kind of boring to me. Considering what Rayna has been through, I'm not necessarily against boring. I'm glad that she's happy and secure. I definitely don't think a relapse is going to push Rayna back into Deacon's arms. That's not the kind of person that she is. I don't think her love for Luke is going to waiver just because Deacon relapsed. However, if she goes to see Deacon or takes Maddie to visit him in the hospital, I can see Luke getting upset and being the one who wants to end their relationship. This might just be the final straw, unfortunately.

Also, I can see how Rayna might blame herself for what happened with Deacon, because of all the demons she uncovered with her Rolling Stone interview. That is certain to cause a lot of stress. In last week's episode, Deacon admitted that he is unable to let go of Rayna because he's still in love with her. She turned on him, saying the article was a good thing, because she has moved on and the truth needs to be out there. It wasn't mean or harsh in the moment, but could cause some pangs in retrospect. You could already tell she was feeling it with the heavy way she told Luke that her talk with Deacon did not go well.

The press will most likely catch onto that too. We've only seen the reactions of the main characters to this article and Rayna's comments, not the general public or the media. They'll certainly put two and two together when word gets out about Deacon.

I hate to say it, but Rayne and Luke's planned Christmas trip to Australia is the biggest red flag. If the Nashville cast was filming in Australia, don't you think we'd have seen some instagrams by now? Am I too cynical? Rayna and Luke may not be over forever, but I definitely don't think they'll be going on a fun-filled family vacation anytime soon.