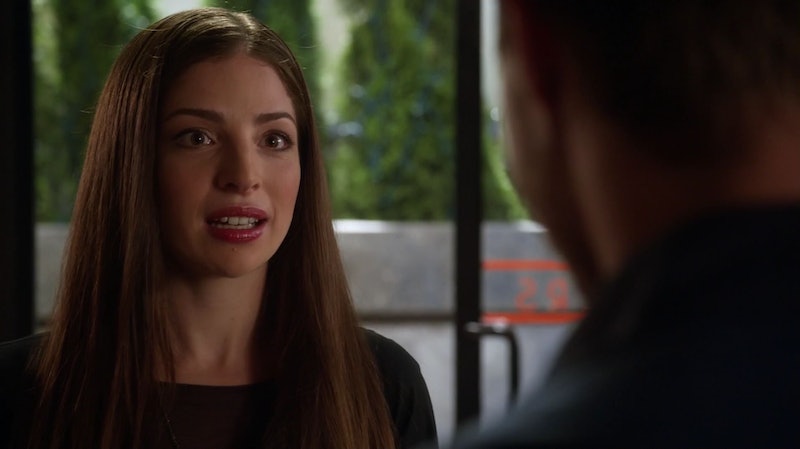 There was a quiet moment during last week's "Flash vs. Arrow" half of the crossover event on The Flash that I am not letting go. Oliver Queen stepped away from his friends (and Iris' wandering eyes) to catch up with an old girlfriend, who turned around to have a cell phone conversation with their child, who he doesn't know exists. Are we going to see Oliver Queen's kid on Arrow ? Signs are pointing to yes. I'm fairly certain that Oliver is the father, because we've seen this girl before, in flashbacks in the Arrow episode "Seeing Red." This is someone that Oliver slept with while still dating Laurel, before he ended up on the Island. Shocking. Anyway, Moira paid the girl off to tell Oliver that she lost the baby and to leave town forever. The girl also tells Oliver that she's going to stay with family in Central City.

With all the "how can I ever be Ollie and not just the Arrow" angst happening right now on the CW series, it would be nice to see Oliver take on a new role, like a parental role. I wouldn't be surprised if we saw more of her. Now that Moira's dead, this girl has no reason to stay out of Oliver's life. The kid should be what, about eight or nine years old now? That's the perfect time to start Daddy/Son archery lessons. Plus, if he is who I think he is, destiny is calling. As it turns out, Oliver Queen's offspring is very important in DC Comics and we should expect great things from him.

The actress, Anna Hopkins, is listed on IMDb as Sandra Hawke. That name holds a lot of weight in DC Comics. In the comics, she's a hippie sometimes called "Moonday" (her middle name) that Oliver hooked up with. In the comics, it was Oliver who offered her money to leave and refused to acknowledge paternity, not his mother.

She later married the adversary and arms dealer Milo Armitage, who we've seen on the show. Interesting. Could Sandra be connected to some bad people in Starling City already?

It's almost certain that this child is Connor Hawke, who eventually takes over as Green Arrow. Sandra took her son to a monastery to help with his rage issues when he was bullied at school for being multiracial (in the comics, Sandra is Black and Korean). This was the same monastery where Oliver trained, and they eventually met. Connor grew up knowing who his father was and idolizing him.

The CW show is sure to handle this a little differently. For one thing, I doubt this girl has any idea that Oliver is the Arrow, unless she's figured it out herself. Which, to be honest, can't be all that difficult.

Here's another question: Is Oliver's kid a metahuman? Connor Hawke isn't one in the comics. He's mostly just well-trained like his father. However, he was genetically modified to have healing and durability powers, and was able to achieve a kind of clairvoyance through zen concentration. Given the events of The Flash, he could easily have been hit in the particle accelerator explosion and received some superpowers that way. That would be a fun twist on his character. Oliver was already a bit jealous of Barry, in my opinion. This could cause quite a bit of drama if it were to be revealed on Arrow.