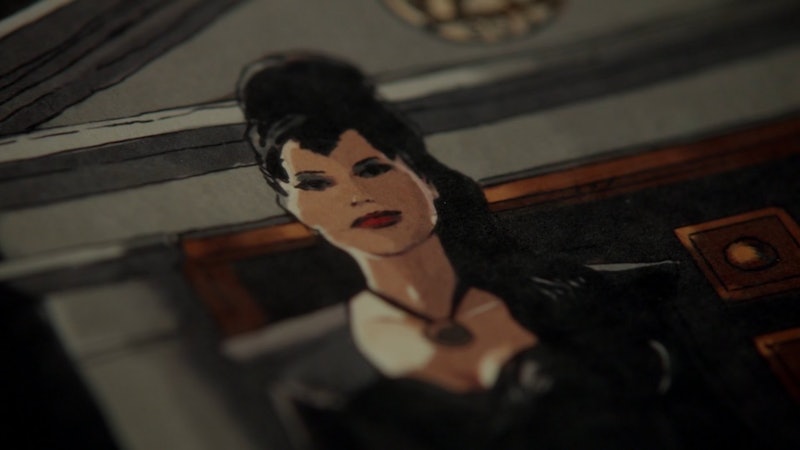 Well, now we know who that (haunted?) mansion belonged to — the person who wrote Henry's book. Once Upon A Time revealed the Author's house. We got to see their secret writing lair, filled with tons of blank Moleskines, I mean, story books. But who is this character? This has been a question since Season 1, and we still don't know. It seems like Rumple has a pretty good idea who the Author is, but he's not about to spill the magic beans. He wants to collect some villains before he confronts them. I love how we went to Oz last year, and yet this storyline with Rumple, Cruella, Ursula, and Maleficent going to see the Author most resembles Dorothy's tale. What else do we know about this fairy tale bard? We know, or suspect, that they were in contact with Pinocchio during his bizarre travels. Remember when Pinocchio added some chapters to the book with a magic typewriter? Too bad Pinocchio is a boy again with no memory of this... for now. We also know The Author is a great sorcerer, according to Rumple. We know they had the Apprentice's hat. I presume the upcoming flashbacks with Rumple and the Queens of Darkness will explain how that came to pass.

There's also, and I will never let this go, the observation Belle made in the season premiere that the Author's mansion came over in the last curse — the curse that was created by Snow White in a failed attempt to escape the Wicked Witch of the West. What was so special about that curse that has yet to be revealed? Clearly the Author has been to Storybrooke before. Why did they choose now to move in? While we wait for Once Upon A Time to return, here are some possible authors.

We've seen literary characters on Once Upon A Time that don't come from what one might strictly call fairy tale, and we have also seen the very real (albeit legendary in part) Blackbeard. So, other historical figures like Jacob and Wilhelm Grimm, Hans Christian Anderson or even Walt Disney could make an appearance on this show. But is any one of them powerful enough to be the single Author behind all of these iconic tales? I doubt it.

Oh, What A Night

Could the author be female? So many of OUAT's version of the tales have a feminist twist, I would not be surprised if their scribe was a lady. Possibly a fairy? I still think the lake house that Emma and her teenage friend Lily "broke" into might be connected. The two houses were pretty similar, and nothing in Emma's life was ever a coincidence, it seems. If the Author lives in our world, there could be a connection with Emma's childhood friend.

Wouldn't you just die? I would die. The mansion does have a lot of nautical decor...

More like this
Viserys’ Fate On 'House Of The Dragon' Could Differ From The Book In This Surprising Way
By Grace Wehniainen
Nicola Coughlan Shared A Lady Whistledown Excerpt From ‘Bridgerton’ Season 3
By Grace Wehniainen, Alyssa Lapid and Sam Ramsden
'The Lord of the Rings: The Rings of Power' Revisits Iconic Spots From 'The Hobbit'
By Darshita Goyal
'House Of The Dragon’s Theo Nate Is A “Massive” 'GoT' Fan
By Maxine Harrison
Get Even More From Bustle — Sign Up For The Newsletter