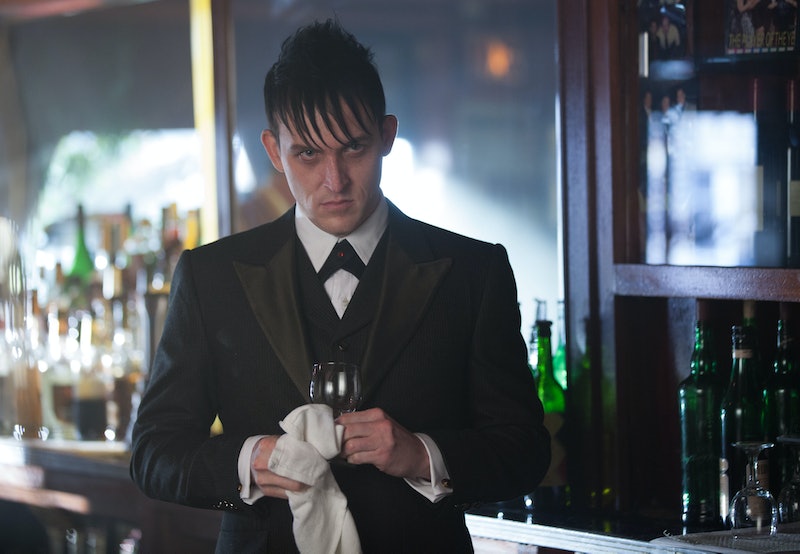 Without a doubt, the breakout from Fox's freshman drama Gotham is Robin Lord Taylor as Oswald Cobblepot. He's sinister, stylish, and almost always one step ahead. But what does Robin Lord Taylor look like outside of Gotham' s city limits, without the oily bangs and signature limp? The actor may be eccentric, but he's not nearly as scary. There's no pointy tie or grease paint bags under his eyes. He's a pretty regular guy and might even get some sunlight from time to time!

Robin Lord Taylor has been guest-starring on the small screen for years, and this is his first major role in television, having had small but memorable parts in both Accepted with Jonah Hill and scary movies such as Would You Rather and Cold Comes the Night. His friends are mostly in the comedy world, unlike the future Penguin who, with the exception of legendary funny lady Carol Kane as his mother, typically hangs with a tougher crowd.

Oswald's particularly odd way of styling himself is, of course, essential to his character. Here is one of the reason Taylor told The Nerdist why he likes his Gotham role.

The other thing about him is his insight into other people’s motivations and his ability to play people off of each other, I think is his greatest strength. It’s another thing that I’m totally fascinated by and am really excited about playing and showing. And he’s a guy with diminutive stature and he looks weird and all these things, but he still manages to ingratiate himself to people and find their weaknesses and exploit those. Again just all in the goal of not being powerless, of not being helpless ever again.

You certainly can't look away from the Penguin. Here is Robin Lord Taylor when he's not exploiting your weaknesses.

On the Red Carpet

It's still a suit, but the tie, pushed-back hair, jeans, and a few pops of color make a world of difference.

Robin Lord Taylor is good friends with Billy Eichner. They went to Northwestern together, were roommates in New York City, and Taylor helped develop and used to film some of the Billy Eichner's early ambush comedy videos for Youtube.

In this interview with Seth Meyers, he revealed that he was in a Mime Show with the Late Night host's brother, Josh Meyers, at Northwestern University.

It doesn't get much more different than these locks. Fans of The Walking Dead will recognize him as "Sam," a character who showed up in Season 4 and then died a brutal death at Terminus in the Season 5 premiere.

Granted, he does somewhat resemble Copplepot while working in a kitchen — but that crook wouldn't be caught dead doing charity work.

Robin Lord Taylor's instagram is filled with pictures of his cat, Finn... so he's really not that different from the rest of us.