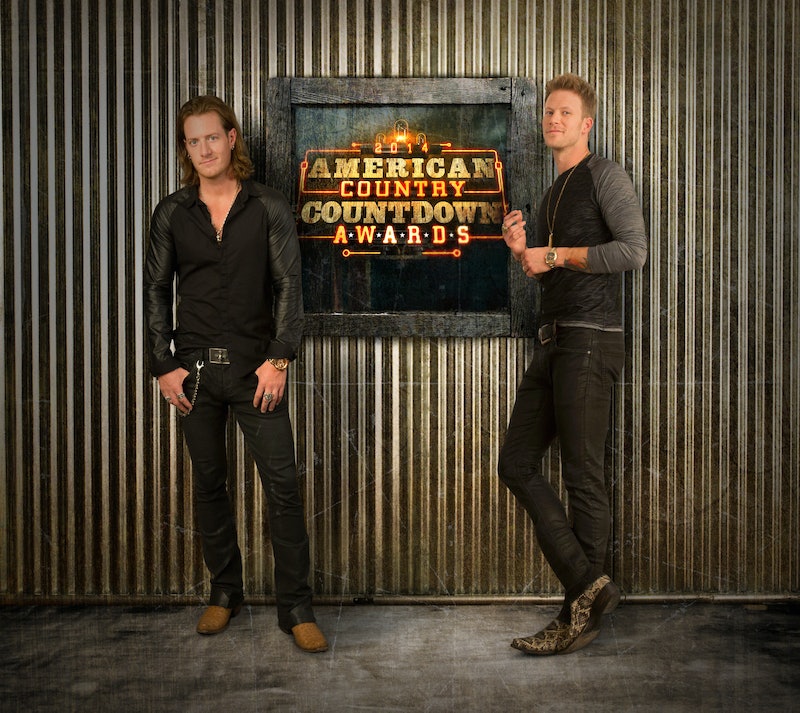 Awards, performances, special moments, and additional surprises courtesy of America's favorite country music artists are airing live on FOX Monday to celebrate the inaugural American Country Countdown Awards . Country heartthrobs Brian Kelley and Tyler Hubbard of the superstar duo Florida Georgia Line are hosting the first-ever Countdown Awards in Nashville, which they claim is going to be a badass two-hour musical party. I know what you're thinking — the CMAs just happened, why are there more awards? The answer: because now instead of the winners being determined by association members, or collecting votes from industry members and fans, Rolling Stone says the ACCAs will hand out trophies based strictly on radio airplay and touring stats.

This new award show deserves a spot on your Monday night TV lineup, because not only is it hosted by the best party-anthem group of all time, but it also features show-stopping performances by superstars like Carrie Underwood, Kenny Chesney, Jason Aldean, Eric Church, Lady Antebellum, and Brett Eldredge. Since Florida Georgia Line is hosting AND performing AND is nominated for six awards including "Album of the Year," you'd think the show is basically there's. But there are so many other reasons to watch, whether or not you're a fan.

ACC Is the Longest-Running Radio Countdown Show of All Time

The radio show, hosted by Kix Brooks, is celebrating its 41st anniversary and officially airs on more than 280 radio stations. The epic countdown covers 90 percent of the entire country — and now it's hitting TV as a kickass award show.

If you thought our super-duo hosts were up for the most awards, think again. The show will only honor nine artists with a trophy, and Luke Bryan's name is in there seven times. Not only is he performing Monday, he is also nominated for Artist of the Year, Male Vocalist of the Year, Album of the Year, Collaboration of the Year and Digital Song of the Year for THREE separate songs. Golly, he's like the Meryl Streep of country music.

Reba is getting the well-deserved honor of being the original NASH Icon, but she will also be performing with Miranda Lambert and her daughter-in-law Kelly Clarkson. Do they also get the award for best family ever?

Carrie just did a little hosting of her own with Brad Paisley at the CMAs and shone throughout the night. She'll open the awards with a show-stopping medley of her greatest hits, which is a pretty impressive feat for a woman headed into her third trimester of pregnancy.

You'll Find Out Everything About the Next Season of True Detective, Apparently

An award show wouldn't be an award show without some sort of major announcement and according to an article FGL wrote for The Huffington Post, this time we'll learn all about True Detective Season 2. Sure, they were probably kidding and trying to get more people to tune in, but you never know.

The duo told The Huffington Post about their plan to keep the party rolling with a show they insist will be highly interactive. Every time Brian or Tyler says the word "Bro," they expect you to join them for a drink.

Don't miss out on the chance to hang with the best two partiers around. Break out the moonshine and turn your TV to FOX at 8 p.m.

More like this
Jason Derulo Is Launching A New Singing Show In The UK
By Maxine Harrison
Kathy Hilton May Not Return To 'RHOBH' — At Least Not Full Time
By Jake Viswanath
20 Years Later, Kelly Clarkson & 'American Idol' Judges Reunite For Her Hollywood Walk Of Fame Star
By Radhika Menon
Everything To Remember About Lace Morris Before 'Bachelor In Paradise' Season 8
By Grace Wehniainen
Get Even More From Bustle — Sign Up For The Newsletter