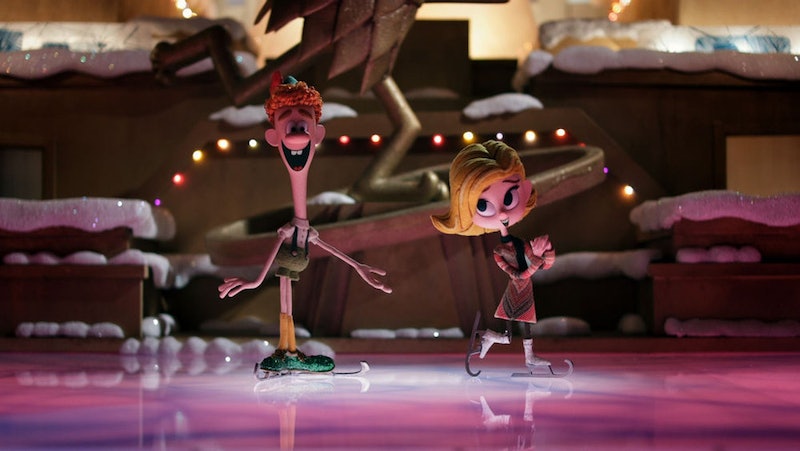 Tuesday night, NBC is airing what aims to be a new classic: an animated, musical version of the 2003 Christmas movie Elf. Wait, you might ask, hasn't this been done before? Is Elf: Buddy's Musical Christmas the same as the Broadway musical, Elf: The Musical, that ran in 2011 and 2013? Christmas musicals often have high-grossing, albeit sporadic, careers like that because they are seasonal. How does Buddy's Musical Christmas compare? Are the songs the same? The short answer is yes, but there's more to it than that. The stage musical, while successful enough for two Broadway productions and several tours, is not exactly what you will be seeing Tuesday night.

The story was adapted for the stage by Bob Martin (who you might know better from the musical The Drowsy Chaperone) and Thomas Meehan (who has adapted many movies to the musical form including hits like Hairspray and The Producers). The music and lyrics were written by Matthew Sklar and Chad Beguelin. They were joined by animation experts Aaron Horvath and Michael Jelenic to produce this musical special. So yeah, there's some experience driving this thing.

But there's one glaring, major difference — this is an animated Elf. That should, at the very least, make the narwal scene a little less distinctive, presuming that makes the cut. Also, if you want dancing, go check out old clips of Christopher Walken in Peter Pan Live! instead. The characters may cut a rug, but it's a different kind of impressing. For another thing, The Elf special is an hour long, so it will be an abridged version of the story told by both the movie and the stage musical. According to NBC's website, the special will include nine songs. That's jam-packed for one hour. Also, this version of the Elf story is narrated by Santa Claus instead of Papa Elf, like in the movie. That was how the stage show did it as well, so there's one similarity right there.

While this will resemble the successful Broadway production, no musical theatre stars provide the vocal parts. Sure, Jim Parsons (who will be playing Buddy) had a lucrative non-musical stage career before finding multi-camera stardom on CBS, and Kate Micucci is one half of Garfunkel and Oates, who could be compared to Zooey Deschanel's She and Him if you were really missing the point. However, NBC did not draw from their wealth of former Smash actors to fill the cast.

If you've never seen or listened to the musical version of Elf, here's a selection of clips and songs from the original Broadway run to help you prepare for Tuesday's special:

How cool! It's not often that a Broadway show becomes an animated musical. It's usually the other way around, especially with Disney. If you're anything like me, you might have some complicated feelings about Frozen coming to the Great White Way. However, maybe this means my hopes for an Aida movie aren't so far-fetched after all. This is also the perfect show for NBC. I can't imagine how gleeful they were to animate their own Rockefeller Center for a Christmas special.

But in the meantime, Buddy takes the metaphorical stage Tuesday at 8 pm.

More like this
After 'Hocus Pocus 2', The Sanderson Sisters Are Coming to Broadway
By Radhika Menon
Everything You Need To Know About ‘Black Panther: Wakanda Forever’
By Bustle Editors
Christian Bale Sang With Taylor Swift & His Daughter Can't Believe It
By Radhika Menon
Rita Ora Celebrates Finding Her "Fairytale" Ending With Taika Waititi
By Sophie McEvoy and Catharina Cheung
Get Even More From Bustle — Sign Up For The Newsletter