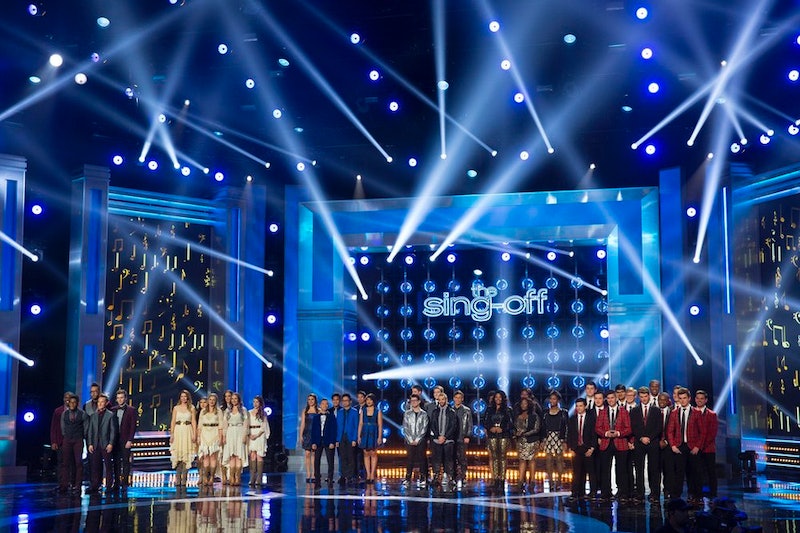 If you were looking forward to the new season of competitive aca-everything, you might be slightly disappointed. The fifth season of The Sing-Off will feature six groups and the competition will only last for one two-hour holiday special on NBC. What groups are they? The competitors come from a variety of backgrounds and locations across the United States, as always. I am, however, interested that there aren't that many co-ed groups competing. Maybe I'm coming at this from a narrow musical mindset, but you'd think that would be easier.

With the limited time, we may get to meet the next Pentatonix, but the journey won't be quite as earned. Jewel is returning to judge this season, as well as Sing-Off veteran and Boyz II Men member Shawn Stockman. However Ben Folds will not return to judge this season. He surprised us all by being the world's biggest, to quote Pitch Perfect, "organized nerd singing" fan back around 2009. (I like to think that living in Chapel Hill and my alma mater UNC had something to do with that, but I don't think that's how it went down.) He will be replaced by Patrick Stump from Fall Out Boy, which, in my opinion, is fantastic. We need more emo pop in a cappella music. Calling it right now: every losing group will be played off to "Thnks fr th Mmrs."

Here are the groups that will be competing on Season 5 of The Sing-Off, along with clips of them performing before they hit the stage this Wednesday night.

According to NBC, this group is comprised of "six women [from Nashville] who met at church and often sing at maximum security prisons around the country to inspire inmates to have hope." Watch them sing Clean Bandit's "Rather Be" for their audition in the video above.

The official announcement for the season describes Traces, a group from New York, as "five spirit-filled divas who give gospel a modern twist with voices as big as their personalities. With their roots firmly entrenched at church, these women find time away from work to perform afternoon shows in front of appreciative and awe-filled audiences." Above is their gorgeous cover of Jessie J's "Price Tag."

More Jessie J... and Ariana Grande, and Nicki Minaj! Their cover of "Bang Bang" is solid, but this group only formed about a month ago. I wonder if that will cause drama on The Sing-Off.

This group from New Haven, Conn. (read: Yale) is definitely hip, despite their name. They will be giving us an "innovative take on a cappella reinvented" that their leader used as an academic project. Of course. Get your a cappella group to do your homework for you. They attempt a type of electronic a cappella, as you can see with the above arrangement of Justin Timberlake's "My Love."

This is the most "traditional" all-male a cappella group in the mix, and what better way to showcase that than a Backstreet Boys medley! NBC describes the other Nashville ensemble as "a group of 12 male students who attend Vanderbilt University. Founded in 2009, Melodores strives to be the best all-male collegiate group in the world." They're already on their way to world fame — their lead singer is featured in Pitch Perfect 2!

This LA group is interesting. It is comprised, in part, by individuals who competed in Season 3 of The Sing-Off. Looks like sometimes you are here to make friends in reality competitions! This casual recording of Imagine Dragons' "Radioactive" has me pumped already.

More like this
Jason Derulo Is Launching A New Singing Show In The UK
By Maxine Harrison
18 Years After 'American' Idol, Jennifer Hudson & Simon Cowell Reunited On Her Talk Show
By Radhika Menon
Pro Footballer Zander Murray Is "Blown Away" By Support After Coming Out
By Sam Ramsden
How Angelica Ross Plans To Make Roxie Hart Feel “Universal”
By Jessica Derschowitz
Get Even More From Bustle — Sign Up For The Newsletter