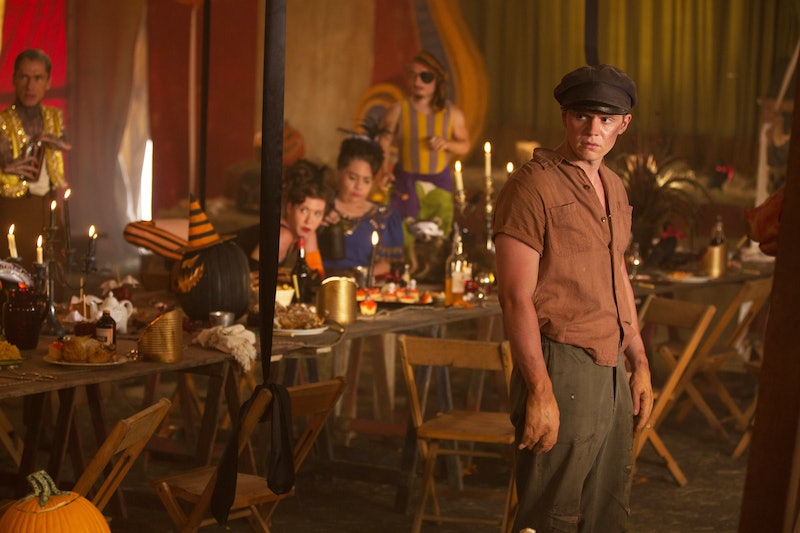 Jimmy has sobered up on American Horror Story: Freak Show and thankfully became likable again. But in order to raise money for a lawyer to help prove his innocence, it looks like Jimmy cut off his hands (his lobster claw hands!). Of course, Jimmy has been resentful of his condition of ectrodactyly (which is what gives the hand the cleft appearance), but this was a drastic measure. Of course, he needed something drastic since Jimmy himself doesn't even know if he did or did not kill the women he usually went to pleasure in "Tupperware Massacre Party." Dandy set him up for the mass murders, but since Jimmy was drunk and mourning his mother, he was blacked out and isn't being the best advocate for his case.

Stanley, who is always lurking about when people are at their weakest moments, visited Jimmy in jail. He told Jimmy that he could get a lawyer Donald Darrow, son of Clarence Darrow from the infamous Scopes Monkey Trial, to defend him. But with a big name like Darrow, he'd of course have a big price tag. Yet, we know Stanley is full of it. Somehow everyone at the freak show believes that he has connections to these bigwigs in their field (like with the doctor who was to specialize in separating conjoined twins). Stanley first tried to see if Ethel left her beloved son Jimmy anything when she died, but when that didn't prove fruitful, he said he had an other idea. And we can only assume it was to sell Jimmy's hands.

I really wish everyone on AHS would stop listening to the evil Stanley's advice. At least Maggie has finally wised up and gotten Deisree to join her side, which is how we discovered that Jimmy (probably? maybe?) actually went through with Stanley's idea to cut off his hands. When Maggie took Desiree to the American Morbidity Museum to show her Ma Petite's body on display (and Salty's head), Maggie saw what could have only been Jimmy's hands also on display. It was the museum's newest exhibit.

Yet, in the promo for Jan. 7's episode, Jimmy still has his hands. So, was the promo scene a flashback? Did Maggie and Desiree not really go to the morbidity museum and it was one of those dreamish sequences that AHS keeps confusing us with?!? Oh, Jimmy, what is the status of your hands??

Unfortunately, it seems like we'll have to wait three weeks to get any of these answers. But I know there will be a lot of unhappy housewives in Florida (errr, the ones who are still alive) if Jimmy doesn't have his special hands anymore.

More like this
Nicola Coughlan Shared A Lady Whistledown Excerpt From ‘Bridgerton’ Season 3
By Grace Wehniainen, Alyssa Lapid and Sam Ramsden
This House of the Dragon Character Will Create Another Scandal For Rhaenyra
By Kadin Burnett
Devi Is Going To Meet A “Smoldering Bad Boy” In ‘Never Have I Ever’ Season 4
By Jack Irvin and Gabrielle Bondi
New ‘Lupin’ Part 3 Teaser Hints That Assane Will “Go Out In Style”
By Brad Witter
Get Even More From Bustle — Sign Up For The Newsletter