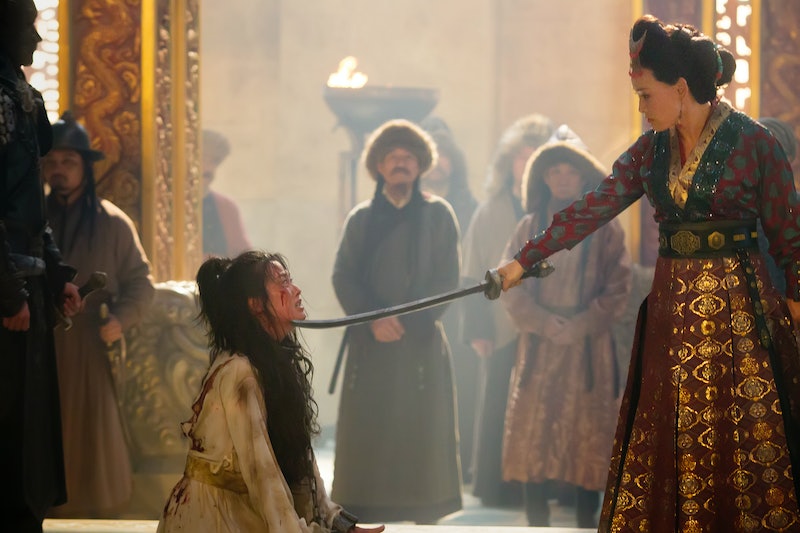 I don't know about you, but I'm not necessarily watching Marco Polo for "the Latin" and for his adventures. I'm in it for the complicated female characters that were ripped from the history books. But just how historically accurate is Empress Chabi on Marco Polo, for example?

Sure, the naked fighting, the stereotypical "warrior princess" and abundance of sex worker characters isn't the greatest for a particular brand of feminism. However, the women are the most interesting characters on the show, whether intentional or not. Like with Game of Thrones, you have to stick with Marco Polo to get to know the woman behind the profession, and it pays off. But the Empress is surely the most interesting woman in the bunch. Chabi pops confidently on screen with the preceding historical background and also television's blessing from characters like GoT's Cersei, Margaery, and even Cat Stark. She's Khan's wife on the show, and their son is a sort of rival to Marco Polo in court. Most of this seems to have been inspired by fact.

Joan Chen's character is fascinating. She's definitely not your typical Queen. She is not purely a hostess, nor is she the stereotypical "power behind the throne." She and Khan are a real power couple. But just how much of this was taken from the history books? Details have been embellished to bring the story to the screen, however, the gist of the Empress' relationship with Khan seems pretty true to life.

Not as much as known about Empress Chabi, though she is the most well-documented of Khan's four wives. That's the first thing that's different, at least — Khan had four wives at once, and various concubines. On the show, he has concubines, but we only hear from Chabi, and he makes a comment about his brother's four wives like that's some kind of greedy move. I think this is a fair adaptation, considering his documented relationship with Chabi most resembles our modern definition of a marriage. On the show, Chabi attends her husband's concubine "auditions" — I think that's how I would do it, too. She's protecting her own interests, and was onto Mei Ling from the start!

Most of what we suspect, like that she came under Christian and Buddhist influence and helped advise Marco Polo, is rumor. We know that she designed new summer armor for the soldiers. She put the ladies of her court to work and was known for being frugal. We haven't seen this yet on the show. Chabi's role has been a bit more diplomatic.

In history, Chabi's political mind was an asset and made her and her husband a team committed to establishing a legacy in China as not just conquerers, but rulers. She insisted on drawing comparisons between her husband and previous Chinese leaders to endear him to the people. I would say the show does that thought justice, wouldn't you? Chabi is respected but not ruthless. She counseled her husband to kill his brother, which we do not know to be true historically, but they both seem to agree that was a just move. That isn't to say he can't hold her own. On the show, we see her with a sword and an arrow. This was likely added for the television show. While I wouldn't be surprised if such a powerful Empress had some skills with a weapon, I can't gather from any accounts that Chabi's combative skills went beyond an intellectual debate.

Queen Elizabeth who? Here's to hoping the show is renewed, and we get to learn more about this awesome historical figure.

More like this
UK Viewers Will Have To Wait To Watch The Handmaid’s Tale S5
By Maxine Harrison
Nicola Coughlan Shared A Lady Whistledown Excerpt From ‘Bridgerton’ Season 3
By Grace Wehniainen, Alyssa Lapid and Sam Ramsden
Everything To Know About 'The Last Of Us' TV Adaptation
By Sophie McEvoy and Radhika Menon
A New 'And Just Like That' Table Read Pic Confirms A Key Character's Return
By Jack Irvin and Grace Wehniainen
Get Even More From Bustle — Sign Up For The Newsletter