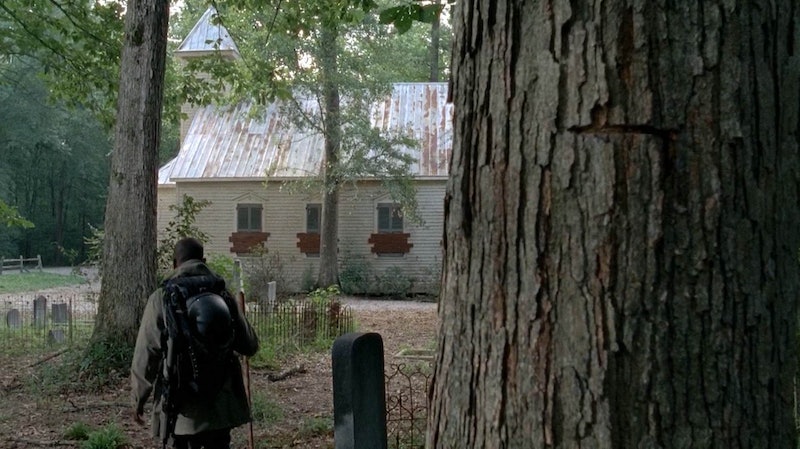 AMC's The Walking Dead is all about some symbolism, but I'm about to take it one step further. I'm talking, of course, about the tree carvings that Morgan Jones has been following in pursuit of Rick Grimes and his comrades. Are Morgan's Walking Dead symbols the "hobo code" used in the 1930s and featured on an early episode of Mad Men, also on AMC?

This is not a new theory, as I pointed out in a previous post. Fans on a Walking Dead subreddit and other sites have noted the similarities. This language was used by travelers to indicate good places to stay the night, danger, and even dogs. The hobos would communicate to each other which families would respond well to a good story, which would pay you for chores, and, as we learned from Don Draper, where a "dishonest man" lived. The symbols have been used recently as well, though this time by burglars. The symbol that Morgan found in the season opener could be from the Hobo Code, but also resembled both the Grady Memorial Hospital symbols, the Terminus markings, and Morgan's own map that marked areas cleared of Walkers. So, it was more of a cool historical observation than a solid theory. Sample of one won't get you very far. However, we saw Morgan encounter a different symbol on his way to Father Gabriel's church in the midseason finale — the symbol for "doubtful," seen in the screen grab above.

This brings added credibility to the theory, in my opinion. Think of the weight that the word "doubt" holds, especially in front of a church. Especially in front of a church with a sinful paster. Father Gabriel has doubts. Rick Grimes had doubts about Father Gabriel and the safety of the church in the first place. As the group heads to Washington without a clear purpose (and without Beth), they are full of doubts.

This was our first hint back in the season opener. I think it's supposed to look like a hot crossed bun, because the symbol means "good for a handout," like a safe haven, or a sanctuary. A sanctuary like Terminus... in an episode titled "No Sanctuary." See what I'm getting at here? I really think this could be the hobo code! Unfortunately, the winter finale was called "Coda" and that is not the symbol for a coda in music. That symbol looks more like the crosshairs on a gun that help you hit your target, actually. Moving on...

This also doesn't explain who is leaving these symbols for Morgan to follow. It's probably Rick, because he and Morgan have the closest relationship. After their last encounter, I can't see many other members of the group wanting to help out by leaving clues. They aren't really the Hansel and Gretyl types. However, if I had to guess which character was a closet history aficionado, I would say Daryl. He seems like the type to surprise you with a nerdy fun fact. Or, possibly Michonne picked it up in graduate school. That would be less surprising and more logical. Either way, I can't wait for Morgan to rejoin the group. Hopefully these symbols will be explained!