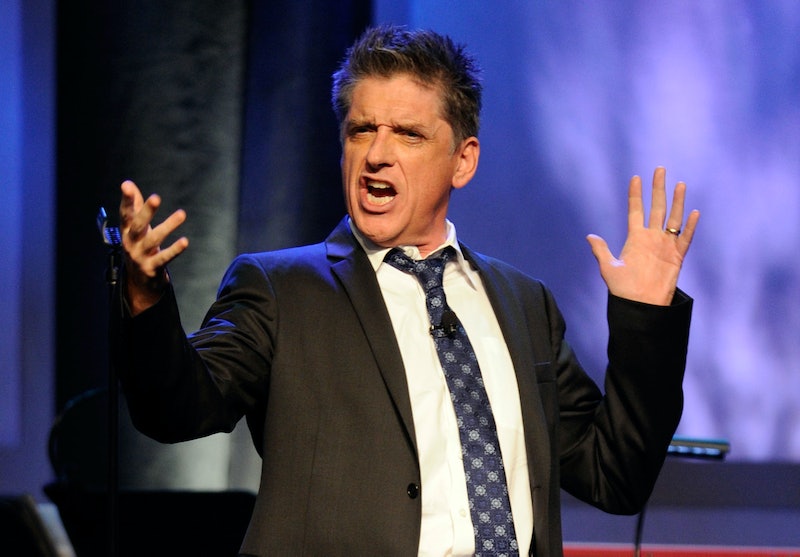 Whenever major comedy talk shows come to an end, the hosts make sure to go out with a bang. From Chelsea Handler to Stephen Colbert, any time a beloved celebrity like this says goodbye to all their fans, they pull out all the stops — so, of course, during his last show, Craig Ferguson did not disappoint. On Friday's episode of The Late Late Show, Craig Ferguson’s final send-off included dozens of celebrities playing drums — and by dozens of celebrities, I mean all your favorites and mine were there — while he sang a cover of Dead Man Fall’s Bang Your Drum. Obviously, it was glorious, and, unlike many of the talk show finales I’ve seen that tend to be upbeat, it was also quite the tearjerker.

Standing on a stage singing alongside a full choir and before a cheering crowd, the Scottish-born host was all about an emotional last show. Celebrities like William Shatner, Shailene Woodley, Lisa Kudrow, Steve Carell, Kat Dennings, Mila Kunis, Matthew McConaughey, and Kristen Bell — oh, and Geoff! — are all in his music video as well, so it almost seemed like the entire Hollywood community participated to create this nostalgic goodbye.

During his last show, Ferguson also made sure to clarify to the audience during a monologue with everyone’s favorite robot skeleton Geoff that though he was leaving late night work, he wouldn’t stop his comedic work at all. He thanked everyone for all of the support over the years (he was a host from 2005 to 2014!) and even interviewed former The Tonight Show host Jay Leno as his final guest.

Though it was much more serious than Colbert’s recent farewell show, Ferguson still put on quite the performance for his final night with a lot of big surprises. With a great attitude, such charm and, obviously, a fantastic sense of humor, his departure will definitely be sad for us all — but, at least there's the future to look forward to very soon, with new host James Corden slated to begin on March 23, 2015.