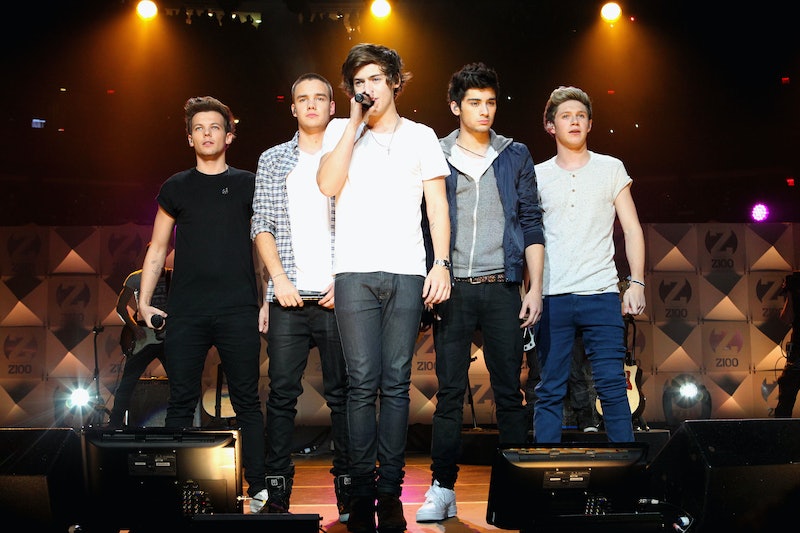 Your favorite boys are in New York this week, and while it is their third time as musical guests on Saturday Night Live , you've surely never seen One Direction like this. 1D has been on the show for the past two years, but Saturday's holiday-themed episode was probably one of their best appearances on screen so far, and it wasn't because of their musical segments throughout the night. Instead, it was the cameo the band made on the popular "Girl Talk" sketch that won the show.

Don't get me wrong, 1D totally killed their two sets. For the first set, One Direction performed "Night Changes." "Night Changes" is the second single to come from the band's fourth album — aptly titled Four — and currently number 53 on Billboard's Top 100. During the second set, the band performed "Ready To Run," the number two track from Four. Both songs proved why millions — sorry, billions — of people are obsessed with them, as their live performances were really well done.

But that wasn't their best moments on the show. Instead, the title of "Best One Direction Moment on SNL Hosted by Amy Adams," — yes, I just made that up, and yes, it is specific enough that only one band could ever win it — goes to Harry Styles, Zayn Malik, Louis Tomlinson, Niall Horan, and Liam Payne for their small cameo on "Girl Talk." If you're not familiar with "Girl Talk," it is the recurring sketch starring Aidy Bryant and Cecily Strong, two BFFs who talk about stuff.

Side note, for those wondering about it: Harry Styles DID wear his fedora hat with his track suit. I just don't want you to lose sleep over that. I digress.

At the end of the segment (at this point, each Direction boy has said a total of two words, one of them being "Hi") Adam's character insists on sending off the viewers with a dance, which is when it happened. It's when One Direction had to freestyle dance in blue tracksuits. And yeah, it was pretty much all you could want in life, next to happiness and world peace (although, their dance moves should solve the other two).

More like this
Olivia Wilde & Harry Styles' Relationship Timeline Started With 'Don’t Worry Darling'
By Jake Viswanath
The Spice Girls Just Dropped A Brand New Music Video
By Sam Ramsden
Kate Bush Revealed The Real Meaning Behind 'Running Up That Hill' Lyrics
By Darshita Goyal
What Does Nancy Jo Sales Think Of 'The Real Bling Ring'?
By Arya Roshanian
Get Even More From Bustle — Sign Up For The Newsletter