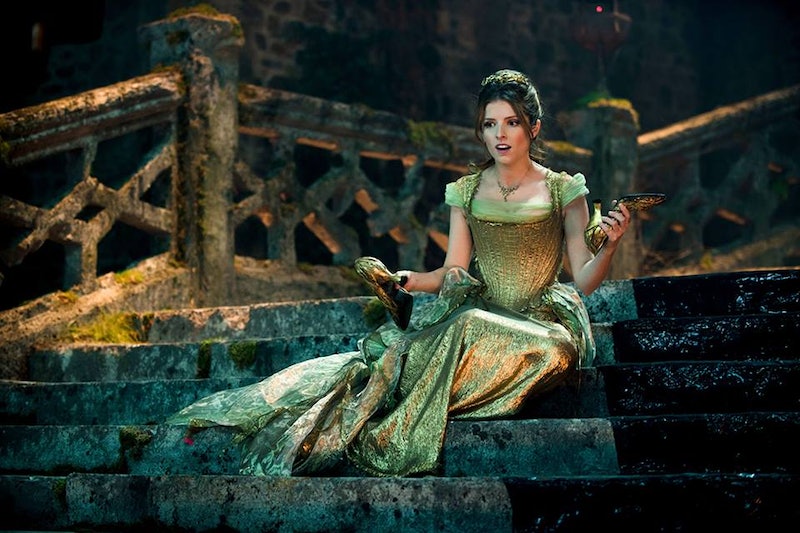 Every song in Into The Woods has had special place in my heart at some point. I’ve grown up with this musical, to the extent that that these interpretations of the fairy tales mean more to me than Disney’s animated classics, to be honest. Ranking Sondheim's songs in Into The Woods' movie is like choosing children and I would be lying if I told you there weren't tears streaming down my face for the entirety of the movie.

However, some interpretations are better than others. Some of the staging got weird. It may have just been the audience around me, but I think there may have been some tonal issues. Nobody seemed to laugh at the same bits. Granted, Sondheim's humor is pretty dry, and his songs often focus on the conversational lyrics rather than emotional belting. There's nothing so dramatic as "Let It Go," in Into The Woods, that's for sure. I don't think we'll see a bunch of Youtube covers of "Hello Little Girl" or "Last Midnight."

Here's my official ranking, now that I've seen the film and poured over the soundtrack. Check them out, and listen along with me unless you don't want to be spoiled that much before you hit the theater.

The second part plays over the credits, so we’ll only focus on the first part here. It’s nice to hear everyone sing together at the end of the piece. However, I didn’t love that it ended on clouds and I thought having the second part of the finale play while everyone's faces appeared during the credits was a bit cheesy. That may be thanks to "Too Many Cooks."

No disrespect to Joanna Riding, but this song is just too short to hold my attention.

Look, I understand that the Witch is upset. I still don’t like this song.

This gory part of the Cinderella story can actually be found in the Grimm Brothers’ version of the tale. The stepsisters actually cut up their feet to try and fit the slipper. Gross!

This will probably be an unpopular opinion. I’m not saying the wolf shouldn’t be scary, but this was a bit much. Calm your zoot suit, Johnny Depp! The arrangement was extra jazz lounge-y and I’m not sure why and I did not care for it. It's also so ridiculous that Little Red trusts the Wolf but not The Baker. Maybe that's realistic. What do I know?

This song loses points for not passing the Bechdel Test! That may be a bit harsh. There’s nothing wrong with this song. It’s just a smaller moment between two characters and I’m trying to spread the wealth.

Adultery is bad! Just kidding, I mean, that’s not why I’m ranking this song so low. I just think Chris Pine sounded better in “Agony,” and the pace lagged a bit. I’m not even going to address the weird accent he put on in this movie for no reason. Emily Blunt’s confusion, however, was hilarious and the scene is excellent. I just think the dramatic pauses were a bit too long.

This is Little Red’s first moment of doubt, and the whole thing sounded just as brassy and confident as ever. The flashbacks were a little weird, too. All of a sudden she was falling down a rabbit hole and there were shadow puppets?

The “Into The Woods” tune/theme that is introduced in the Prologue may be the only ear-worm that Steven Sondheim has ever written. I’m truly sorry if it gets stuck in your head. Welcome to my world. There’s a lot going on here. Meryl Streep does a bit of rap. Bet you never thought you’d read that sentence, huh? The scene, on the other hand, is incredible. Sweeping back and forth, introducing all of the characters. It’s ambitious for a musical to attempt a convention that seems so much more conducive to the stage. They nailed it.

This is Meryl Streep’s first big moment. It’s quite creepy. She sings to Rapunzel, a girl she has captured, about how the world isn’t safe for her to go. It’s the same tune, you may have noticed, as the one Rapunzel sings out her window. Yikes!

This five person patter song is one of the most difficult in the musical. It totally captures the sensations of blame and panic. It’s also a great recap in case you fell asleep for some reason. However, anyone who has ever seen the stage musical, say it with me — “Your Fault” was too slow! I found myself tapping my foot to try and quicken the pace. Spoiler alert: it didn’t work. Weird.

I don't think Emily Blunt is going to record an album any time soon, but I can’t say enough about how well she acts in these songs. In this, she's having a complete breakdown and it makes what happens after all the more tragic.

What’s more fun than two princes arguing over who has it worst, while splashing through a stream and bearing their chest hair? This song was completely out of control and I loved it.

Have you ever wanted to intervene in a movie and tell all the characters how ridiculous they’re bring? That’s what the witch is doing in this song. I can’t tell you how many times I have wanted to subtweet “I’m not good. I’m not bad. I’m just right.” Also, Meryl.

It may be because I’m a girl, but I often forget about Jack. Daniel Huttlestone’s big song is fantastic. It soars. It’s about growing up. It foreshadows The Baker's Wife and her wish to live "in between" the fantasy and the reality.

With one simple choice, Sondheim gave Cinderella agency and turned her into one of the most relatable characters in musical theatre. Instead of just dropping a shoe, the Prince has poured pitch (tar) on the steps. She’s stuck, and ultimately chooses to leave the shoe for him. That girl over-analyzes that pitch the same way I scrutinize a text message. Plus, how many of us have tried to flip the script to get out of making a scary choice? It’s brilliant.

Towards the end of the musical, four of our heroes come together in this song to tie every storyline together thematically. I dare you not to cry. We may have this song to thank for the entire movie, to be honest. Obama (or, at least, his speechwriting staff) may have referenced it back in 2011 and the director, Rob Marshall, was inspired to bring this musical to life on screen.

As a fan of the musical, I don’t think I ever expected to pick this song over all the powerhouse solos. It’s a relatively simple duet, but James Corden and Emily Blunt knock it out of the park. There’s something really beautiful about romanticizing and idealizing a working partnership. Plus, the song ends on a fit of giggles and I don’t think I’ll ever find anything cuter than that.