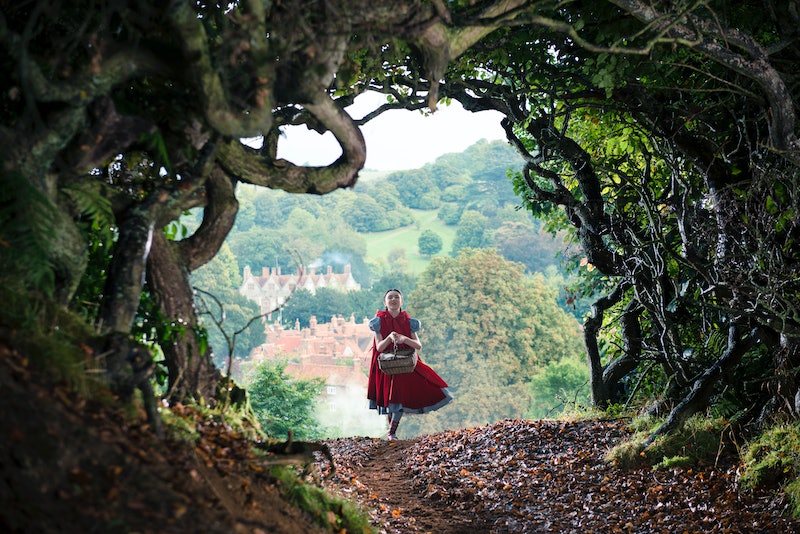 Even if you think you know how Cinderella and Jack and the Beanstalk end, beware. There have been a lot of concerns surrounding what changes Disney’s Into The Woods movie would make by adapting the stage musical from Steven Sondheim and James Lapine. Let me quell your qualms real quick — and, spoiler alert — there is death and there is adultery in Into The Woods. It is a dark film. None of that has been smothered for a younger audience. I think that was the biggest concern, and it turned out to be unfounded. That said, there were plenty of adjustments. Into The Woods premiered on Broadway in 1987 and has been performed tirelessly around the world since. The way it combines and comments on fairy tales speaks to us in a different way at every age.

Before I begin, I will say this. If you don’t like the movie's choices, it’s going to be OK. You can always go back to the cast album and your worn out VHS of the original production with Bernadette Peters. You can always buy a ticket to a local production or stage it yourself at school or with friends. The film adaptation is, in my opinion, absolutely beautiful. I want to see it again and again, which I can't say for Les Miserables.

There are plenty of small changes. New lines. One of Little Red Riding Hood's lines was given to Jack. The Baker's Wife falls off a cliff instead of being crushed by the Giant's foot. Jack carries around the golden egg instead of the hen. Cinderella's father does not stumble into view. We never hear about Snow White and Sleeping Beauty. The giant isn't near-sighted (yes, that is a plot point on stage). That said, here are the big changes.

She also doesn't have twin babies. So that's one happier ending. From a feminist perspective, I'm honestly kind of okay with that. We already have the Baker's Wife dying after she's committed adultery. Having Rapunzel as the teen who "gets pregnant and dies" is kind of a shady message. However, if you are a purist, brace yourself. She and the Prince ride off, never to be seen again. On stage, she runs hysterically into the Giant's path.

The Baker Is the Narrator

In the stage musical, the narrator is a separate character. The fact that the baker narrates instead foreshadows the end, when the Baker has to raise his son alone, and begins by telling “the story of how it all happens,” so cue my tears. However, the narrator serves a higher purpose on the stage. It gets meta in the second act. When the Giant confronts the group looking for Jack, they break the fourth wall (or... one of the walls) and throw the narrator to the Giant instead of the boy.

The group then has to carry on without someone to tell their story, which is supposed to explain why Rapunzel dies and the Baker abandons his child and the Baker’s Wife ends up in the arms of Cinderella’s Prince. It’s one of my favorite things about the musical, but I understand why that might not work as well in a movie. There are already enough odd moments, like Cinderella pausing to sing a song and whatever those shadow puppets that Little Red Riding Hood encountered were.

The actor who plays the narrator typically doubles as the Baker’s Father, who has become a mysterious old vagrant and actually helps his son on his quest. There are two scenes with the Baker's Father, but they are a bit different. The first was a flashback, where we see him steal the witch's beans. The second occurs right after The Baker leaves his baby with the kids and runs away, grieving the death of his wife.

That scene is in the stage musical, but it accompanied by a song called "No More" and holds a little more weight, since we've seen the Baker's Father and their relationship before. The scene in the movie is brief and seems random. We also get the sense that the Baker's Father isn't really there. This is the one change that I'm still coming to terms with. I wish James Corden was able to have that big musical moment. He shines in the film, and “No More” could really resonate with audiences today.

There are a lot of songs in Into The Woods, and many of them were still cut from the film. “I Guess This Is Goodbye,” Jack’s ode to Milky White, is not there. The transitional “midnight” songs are gone. Rapunzel and the Witch’s duet “Our Little World,” which I happen to like but is often cut from the stage musical, is not in the movie. The Act One finale "Ever After" is instrumental only, like "No More." Reprise? Re-Please! Both the Second Act Prologue and the second “Agony” are cut, which is very upsetting. However, while the lyrics are funny, it's probably for the best. How could you top Chris Pine and Billy Magnussen's performance?

On stage, the Second Act begins with "Once Upon A Time... later" and goes on to detail how our many heroes and heroines find their way back into the woods. The Baker actually goes to the Palace to warn Cinderella and the Royal Family about the Giant. The movie masterfully mashes this up with the end of the First Act by having the Giant attack Cinderella and the Prince's wedding. That ensure that everyone in the kingdom is in one location, and then the story picks up as they run away from that attack.

However, there aren’t any new songs. Musical theatre fans, myself included, can be downright cynical about musicals adaptations adding songs in odd places. They’re only doing it for Oscar nominations!

From A Certain Point Of View

The most glaring lyric changes are in “On The Steps of the Palace” when Anna Kendrick has to sustain a note on the word “am” instead of the word “are”. It may seem like I’m just finicky about grammar, but it’s not as easy to sing! Andrew Lloyd Webber is infamous for stuff like that, and that’s not the comparison you want me to make right now. However, this was done to change her perspective so that the songs are showing rather than telling.

The movie gives the witch a reason for choosing this moment to offer the “curse reverse” to the Baker and his Wife. They are three days away from a Blue Moon, which is the only time the Witch can make the potion and end the curse. This adds a little more, albeit magical, logic to the plot. Otherwise, you’d think the witch just got tired of looking ugly. Maybe she wanted to be hip and therefore appeal to her teenage daughter. The Blue Moon helps to provide a visual cue.

The music we hear in passing at the ball is the Night Waltz from A Little Night Music, another of Sondheim's musicals. How cool is that?