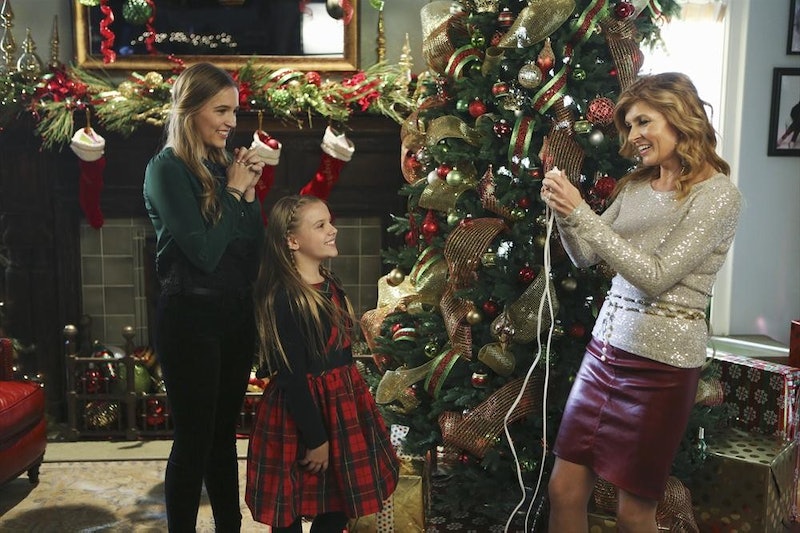 New Year's Eve is as much about looking forward as it is about looking back. I don't think anybody could benefit from some forward-thinking resolutions more than the Nashville characters. With all the back-stabbing, record deals, and revenge sex with Jeff Fordham, everybody could use a fresh start. Avery, Gunnar, and Scarlett could be the next big thing, but their respective personal drama could keep the ultimate trio away from my ears. We can't let this happen! Changes need to be made and they need to be made now.

It would also be awesome if Juliette joined the actual show again. She's been off in her own pregnancy world for far too long. Avery makes a good ambassador, but I'd like it if she interacted with more than just her entourage for once. In Nashville's grown-up world, everything is falling apart. Deacon is sick. Rayna and Luke are single and in debt. Jeff Fordham may have upwards of three scandals on his hands and Teddy Conrad is falling for the oldest politician trick in the book. It's time for an intervention, and I am here with all the solutions.

Here are some resolutions for our country heroes to ponder before Nashville returns to ABC in February 2015.

That's the real issue here, not to mention Rayna's made it quite clear that this is all she wants. Take a break from all the feels and get back to what matters. Her relationship with Deacon, and even Teddy and Luke, will benefit from a little me time and a little Maddie and Daphne time.

Seriously, I'm kind of on his side. It would have been so much easier to go along with the wedding and then quietly dissolve the relationship down the road. He's got to focus on the financials right now. Maybe those boys won't be in boarding school much longer after all.

Deacon Claybourne: Do Not Gloat

Just because Rayna dumped Luke and just because it probably has to do with you does not mean you're the winner here, Deac. Especially with this news that he might have cancer. Sticking it to Luke is the last thing he wants to be doing right now.

I know that according to TV, it's funny to watch pregnant women go all "crazy," but all this stress cannot be good. I'd like to see the return of the smart, fiery, savvy Juliette in 2015.

Will Lexington: Make Peace with Who He Is

Seriously, I think one of the saddest scenes before Nashville's hiatus was Will's inability to understand homosexuality as anything other than a quick-fix hookup, as he was baffled by meeting a gay man in a serious relationship. He deserves to be in a happy, loving relationship too. He should also probably make a graphic organizer of everyone who is blackmailing him. Just in case.

Scarlett O'Connor: See a Therapist & Kick That Stage Fright Once and For All

Avery Barkley: Try To Open Up

Juliette may be extra alert, however I think Avery needs to get over it and start doing work to repair their relationship rather than throwing money at the baby. It was Jeff Fordham, dude! Clearly Juliette cares about you and not that sleazeball.

We all at Bustle saw this coming miles away. Seriously, I even joked that Jason Scott was Kiley's baby daddy back when Alexa Vega was cast. Please, for Heaven's sake, don't let Gunnar go to that dark place. Not after his band was the cutest thing on six legs a few episodes ago.

Zoey Dalton: Hit The Beach Once A Week

Layla Grant: Find Someone Who Appreciates Everything She Brings To The Table

Layla, Layla, Layla. I get it, girl. I know you want to feel wanted, but Jeff Fordham is not the answer. You need to get out of that marriage and you need a major image makeover. Let's take it one step at a time, OK?

Look, I am not judging sex workers. However, I do not reflect the world we live in and I am not a mayor. There have got to be other ways to find a "good listener" in Nashville, and one who doesn't have the potential to derail your career.

Maddie Conrad: Crush On Someone Who Won't Land You in a Tabloid

Maybe she should spend more time with her cousin Scarlett. I also wouldn't complain if they had a duet! But seriously, this girl has the worst taste in company. I guess now that Luke won't be her stepdad, his son is fair game? It's still a little sketchy for my tastes.

Daphne Conrad: Get Noticed By The Adults

She is the literal harmony to Maddie's melody on this show. It's time for the dynamic duo to break up and for little sis to get some storylines of her own.

There has to be a better way to make money, right?

If anybody could benefit from some girlfriend bonding time, it's those two.